How a Pair of Crocs Legitimately Saved My Life

HomeHow a Pair of Crocs Legitimately Saved My Life 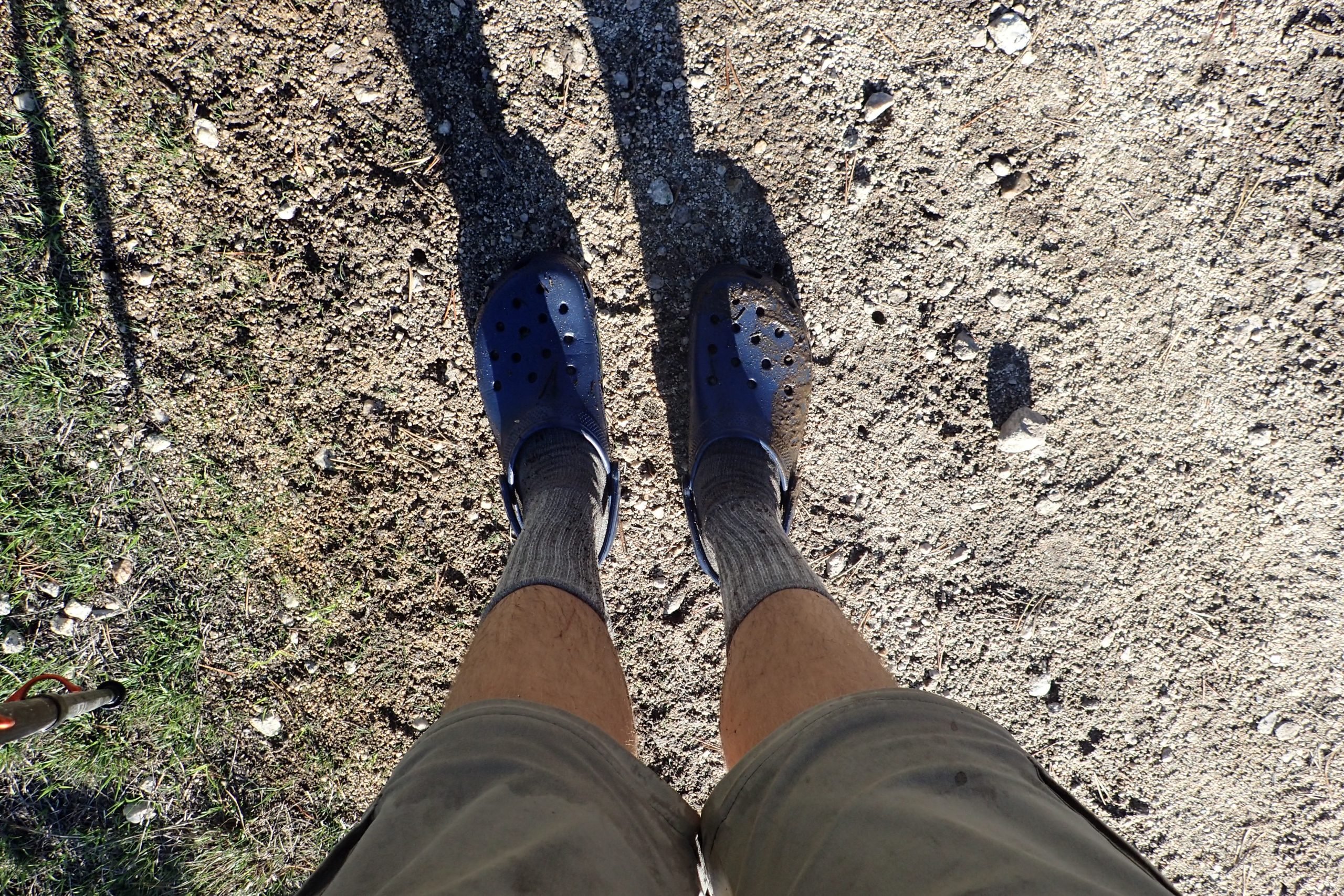 We made our way through an empty Tuolumne Meadows, putting in some miles on our way towards Donohue Pass. Following the banks of the overflowing Tuolumne River, we came across the first creek crossing on the trail for which we had to take off our boots if we wished to keep them dry. In no way was this a difficult crossing, as the small creek was hardly treacherous, yet the water was deep enough to warrant the use of my creek crossing footwear: Crocs.

Into “fording mode” I went for the first time: off went my pants, socks, and boots. On went my Crocs. I used my boots as a storage locker for my pant extensions and my socks, dividing each respective piece into a boot of its own. I picked up my boots and proceeded to look for a decent place to cross, which did not take very long.

I have no idea whether it was laziness, stupidity, or simply whether my 19-year old, undeveloped frontal lobe failed me, yet as I faced the creek crossing the brilliant idea of throwing my boots across the creek suddenly popped into my head. My thought process went as follows:

“These boots are kinda heavy. I don’t really want to have to carry them across this creek.”
“I’ve got an idea! How about I throw them across!”

I got ready to let the first boot fly. I took the boot, stuffed with my pant extension and socks, and lofted it high in the air, only to watch it bank off the tree directly in front of me and into the creek.

The boot began to race towards the Tuolumne River. I immediately dropped everything and ran after that boot, ditching my other boot and hiking poles in desperation. With a long leap into the creek I was able to grab the boot. “VICTORY!”, I proclaimed. With a wet boot in hand I crossed the creek, releasing a giant “PHEW!” as I came out on the other side. My dad gave me the trademark look I had seen countless times before, a look that mixed “Man, are you stupid!” and “That was pretty funny, dude!”

As I sat down to dry out my wet boot, it hit me. “Wait, I have TWO feet?!” A biological breakthrough, I know, yet it made me ask the question: “Where is my OTHER boot?” “Are you SERIOUS!”, exclaimed my Dad, “It rolled down the bank and went in the creek when you ran after the first boot.”

All was not lost, however. I let out a primal scream and then got down to business.

Tuolumne Meadows was not too far from our first resupply at Mammoth Lakes. While we had Donohue and Island Pass ahead of us, as well as miles of snow, neither pass was known for being overly treacherous. I was confident in my ability to suffer through discomfort, and knew that I could make it to Mammoth Lakes. What other choice did I have? Crocs and crampons it would be!

Using my Garmin inReach Explorer+ satellite communicator, I sent my mom the message I knew would cause a firestorm.

“Hey mom, I need you to order a pair of size 13 Salomon 4D II GTX Backpacking boots to Mammoth Lakes, CA ASAP. All is fine. Love you!”

Like that would go over well. Her response was as anticipated. “What?!?!? Why do you need boots?!” After a LONG series of text message exchanges, which extended over several hours, the boots were ordered, scheduled to be delivered the day before my dad and I estimated we would arrive in Mammoth Lakes (thanks Zappos!!). It was at this point that it really hit me: I have to hike in CROCS?!?!

The combination of Crocs and crampons, to be honest, was not that bad. At the least, the Crocs provided me with some protection from the debris of the trail, whether it was rocks, snow, or twigs. When combined with my hiking crampons (Hillsound Trail Crampon PRO), I had a decent-enough footwear system with which I had traction on the icy morning snow. And to be honest, the comedy of looking down at my feet provided me with motivation to get to Mammoth Lakes, ASAP.

The creative combination of Crocs and crampons served me well enough. With enough rigidity to support my hiking crampons, they had enough traction for icy morning conditions. Snow did ball up underneath my feet, yet with my wool socks my feet stayed surprisingly warm while wet (one of the major benefits of wool socks).

Looking back on now, I could not be happier with my choice to bring along Crocs as part of my JMT gear list, even without considering this crazy scenario I was in. When I got to camp they were a refreshing break from my burly hiking boots, and they performed brilliantly for creek crossings, providing me with some added closed-toe security. I can honestly and proudly say that I LOVE my Crocs, and plan to bring them on trips in the future. You never know when they might come in handy (like when you toss your boots in a creek!).

P.S. Sadly, I lost one of my Crocs fording towards the end of the trip