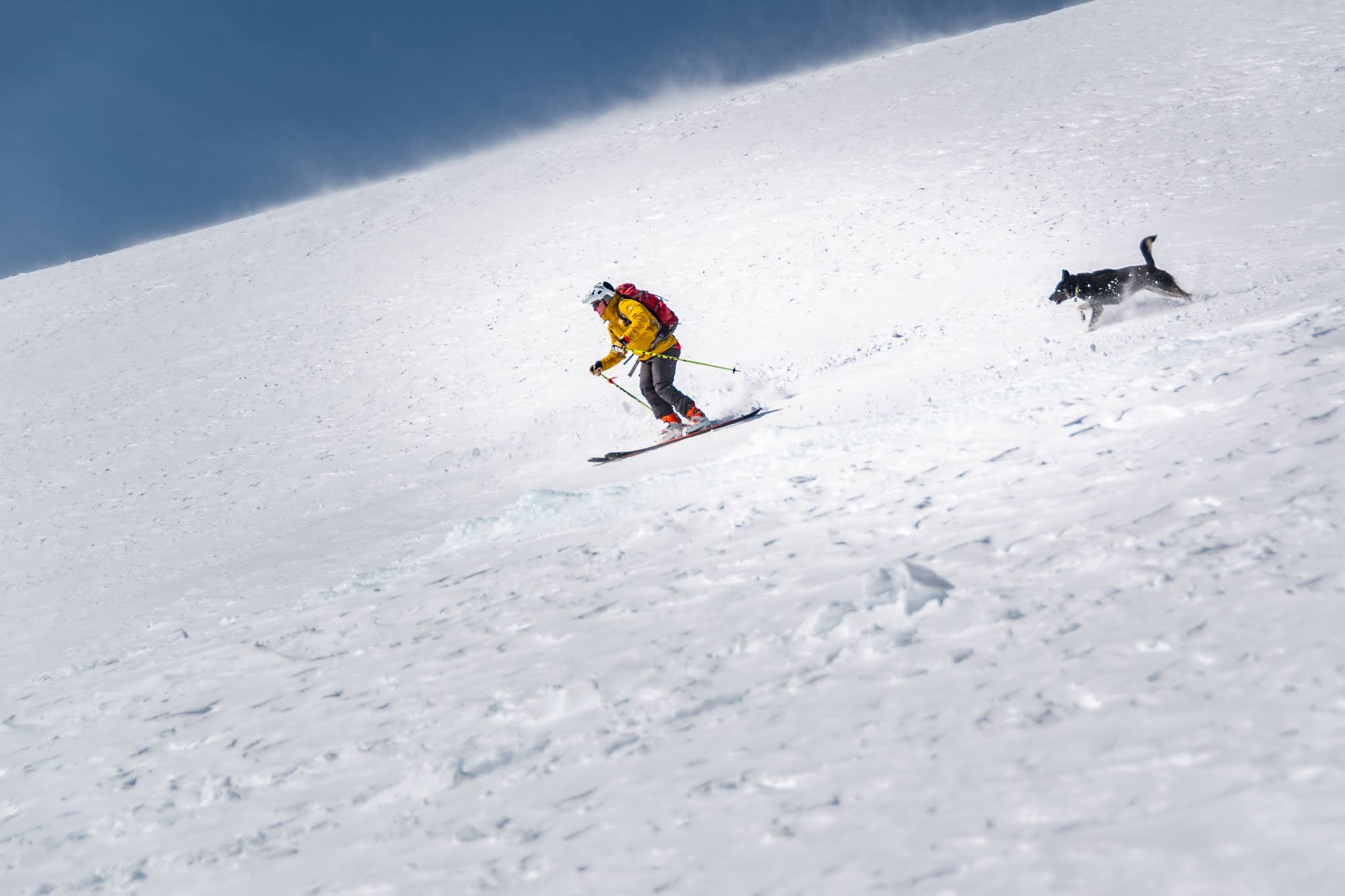 The day before, Dan, Ian, and I climbed Whitehorse mountain (see trip report), so needless to say we were TIRED!

With good conditions, everyone in the group had a similar trip idea for the day: Mount Saint Helens. The Worms Flows route appeared to be in good condition from trip reports we had been reading throughout the week of high pressure and clear skies, and snow came down to the parking lot. NO BUSHWHACKING REQUIRED!

We were monitoring a storm front that appeared to be rolling in Saturday night, around 6 PM according to many weather models. The front was supposed to bring high winds and moisture. We planned to start around 8 AM, estimating it would take us around 6 hours car-to-car, putting us back at the cars around 2 PM. That would give us enough buffer room to make it down before the storm, we anticipated.

We headed out of Seattle around 4 AM, reaching the parking lot by 7:30 AM. We were expecting a CROWDED lot, with the good weather bringing snowmobilers, snowshoers, and skiers alike to the mountain.

To our pleasant surprise, it was not nearly as crowded as we anticipated. We met up with Zach, Allegra, and Chris, slapped on our skins, ran our departure check, and headed out onto the icy snowshoe path through the trees.

The Worms Flows route begins in the trees as a marked snowshoe and winter hiking trail; follow the blue blazes posted on the trees, linking up markers like connecting the dots. The track was crusty in the morning, chopped up from snowshoers and hikers, but made for quick and easy skinning. We ran our departure check at around 8 AM; we were through the treeline by around 9 AM.

Even in the treeline, we noticed that the skies were grey-er than we had expected; there were lingering clouds and mixed snow/sleet coming down intermittently. HUH. . . what’s that storm doing?

We popped out of the trees around 9 AM, getting our first view of the mountain and the ridge line we would ascend to the crater rim. There were 30 or so snowshoers dispersed within sight, at different elevations throughout the route. We could see a few plumes and wind whipping off the top; it looked icy up there. We talked with a few snowshoers who came down from the top, reporting crusty and firm snowpack intermixed with pockets of soft deposits.

Early on in the morning, around 10 AM, the visibility to the top was poor. There was a low-hanging cloud that kept the upper part of the route out of sight. Around 10:15 AM or so, wind moved the cloud and treated us to a view like this:

We had stopped to put on our hardshells, as the wind and snow remained intermittent throughout the climb. The ridge, for the most part, was hard and crusty snow mixed with occasional patches of ice. We noticed that many skiers had taken off their skis and began to boot up the ridge, even as low as 4000′. We opted to put on our ski crampons instead, which helped tremendously with traction.

We passed the weather antenna by 10:45 AM; we were a bit slower than we had anticipated, but that made sense. We were not in a race either. We were monitoring conditions as we climbed:

Technically, the Worms Flows route crosses the Swift Glacier; in reality, you can hardly notice the transition. There are no crevasses to be seen, nor does the feel of the route change much, if at all.

Ocasionally we found pockets of blue ice at the higher elevations, past 6000′ or so. Again, our ski crampons were a MAJOR help; I would highly recommend bringing them in your pack.

We reached the crater rim at 12:45 PM; WOOHOO! The wind was whipping over the edge, and we knew to take care with the cornice. The Mount Saint Helens cornice is notorious for coming as far back as 50 feet in some places. Make sure to give it plenty of space! Don’t want to be climbing out of that crater. . .

We spent little time at the top, enough to take a few photos, transition, and ready for the ski down. It was too windy and cold to enjoy. . .

Except for a few sections where we kept to skier’s right of the uptrack, we followed our uptrack on the way down. This made navigation easy and kept us out of most objective hazard. The skiing was VARIABLE, to say the least. There were pockets of wind-loaded snow now and then, but for the most part the top layer crust was pretty bulletproof. Snowshoe tracks made for tough skiing, the chopped up crust feeling more like boulders than snow.

The best part of the ski down was a man and his dog sharing the descent!

We were quickly back at the treeline by 1:45 PM, ready to get back to our cars.

We were able to ski all the way back through the trees and to the parking lot without stopping, transitioning, or much poling. That was nice! From top to bottom, we made it from the crater to the cars in around an hour (at the top around 1 PM, back at cars by 2:15 PM).

For the most part, the Worms Flows route is straightforward, fun, and high-traffic. But, in the spirit of learning, here are a few lessons and notes I took that might be useful: