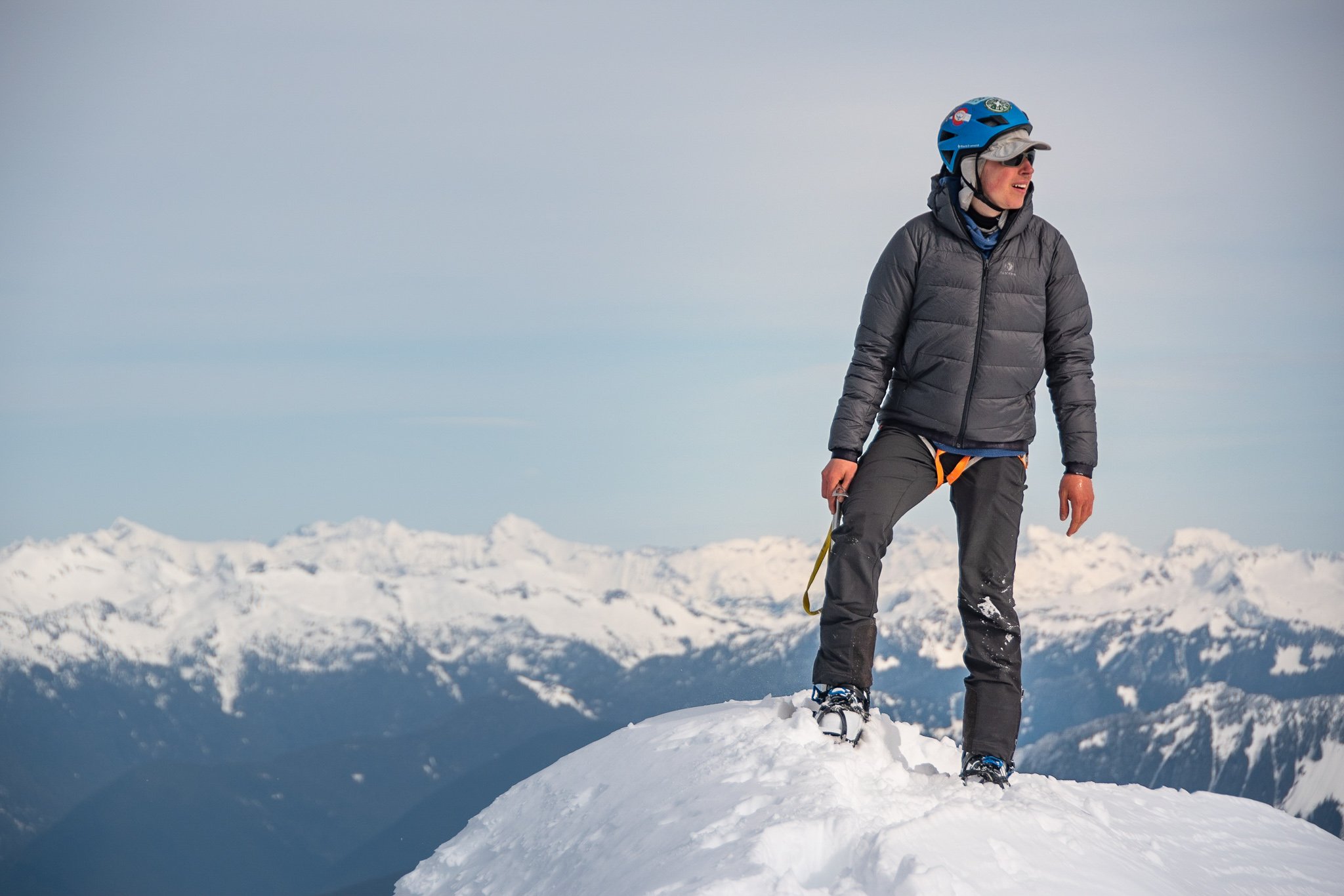 The week leading up to this trip was truly a treat; for 4 straight days, we had clear skies, high pressure, and bluebird days. Monday and Tuesday were cold and clear in the Cascades, while Wednesday and Thursday noticed a slight warming trend in the upper elevations. Still. . . conditions aligned for stable snow in the alpine.

Earlier in the week, as well, a few skiers posted trip reports about Whitehorse Mountain. Their reports highlighted “soft, sugary snow” and highlighted the stability of the snowpack on the northern aspects of the mountain.

Dan Stirling, Ian Cox, and I had been considering heading up to British Colubmia for a weekend tour, but turned our eyes to Whitehorse upon reading the reports. Whitehorse, according to Martin Volken’s guide book, “requires diligence and patience” to “catch it in the right condition.” Glacial features mixed with steep gullies can make for complex terrain. As Volken puts it, “this outing is direct, steep and physical–a one-day extravaganza of Cascadian ski mountaineering.”

Humbled by the challenge of the route, Dan, Ian, and I prepared for a long and strenuous day. . .

We drove our car up to the Neiderprum-Whithorse Mountain trailhead, arriving around 4AM. To our surprise, their was another car parked there already; word had spread to them, just like us, that Whitehorse was in!

We strapped our skis and boots onto our packs as we hiked along an old forest road towards Snow Gulch. We brought trail runners for this first section, rather than hiking it in our ski boots. I HIGHLY recommend bringing a pair of trail runners or approach shoes, as the bushwhack will be miserable in ski boots. The trail was mostly snow-free to the gulch, and made for easy, quick moving. You can fill up water here in the Snow Gulch creek.

We reached Snow Gulch at approximately 5:15 AM; from here, the route begins to climb up the creek towards a ridge for the start of a steep bushwhack. The creek can be slippery and mixed with snow and ice, so take care in your footing. Don’t want to slip before you even get to ski!

We had read mentions of the infamous “bushwhack” up Snow Gulch; around 800 vertical feet, on a map it appears short. Volken barely mentions it in his description of the route; he mentions “brushy sections” and “straight up the drainage.” While those are both accurate, I feel that a more apt description is as follows:

The bushwhack begins at around 1100′; it ends at approximately 2200′. It has three semi-distinct sections; (1) slashing through alders, (2) slashing through downed trees, and (3) a steep climb through tall trees.

For the first 150-200 vertical feet, you will climb steeply through downed alder and brush. It is thick and the slopes are mostly loose dirt and roots. If you are lucky, you will be able to follow old footprints and tracks from previous skiers. If not, simply maintain the ridgeline.

Once you are through the low alders, the brush transitions to downed trees and thick brush. It is no more or less fun than the alders. With your skis on you will likely have to push and duck underneath branches at times.

Finally, around 1800′, the ridge opens up to larger trees. It does not make the climbing any less steep, but slightly less treacherous. The footing is still mostly loose dirt and roots, but much easier now that you are not thrashing your way through alders and downed trees.

It is fairly clear where the bushwhacking ends. The old growth forest opens up to a clearing where there is deep, thick snow. After postholing up to our waist once or twice, we realized this, and sat down to take off our trail runners and transition to ski boots, skis, and climbing skins.

From here, you will need to switchback your way up the drainage until around the 2600′ contour, where you will want to traverse to the E across another ridge to enter the Whitehorse drainage proper (Ashton Creek drainage). Proceed with caution through this area; it is a steep gully, and in poor snow conditions can have overhead slide hazard.

We cross over into the Whitehorse drainage at approximately 8 AM, and began climbing up towards the Whitehorse Glacier. We stayed to climber’s right throughout the climb, avoiding crevassess and a major runout zone through the middle of the drainage. There were faint tracks from skiers earlier in the week, but for the most part the tracks had washed out from warm conditions on Wednesday and Thursday. The snow was light and faceted for most of the climb, aside from one major area of old debris, which was rock hard and crusty.

For the most part, crevasses were filled in, with the larger ones having noticeable open sections that made for easy identification.

The uptrack had two tricky terrain features: first, around 5600′, there was a steep rollover with ice in some sections. We chose to take off our skis and boot up this section, which ends around 5750′. Second, there is the summit block, which we also chose to boot up for. The summit block is approximately 55 degrees and was icy and firm near the top. We brought a rope and a picket to rappel the top 50 feet or so of the summit block, for added security. Dan downclimbed this section with two ice axes, saving us our picket. THANKS DAN!

We reached the base of the roll over at 5600′ at around 10:30 AM; it took around 30 minutes for all 3 of us to make it through. We were on top of the rollover by 11:15 AM, beginning our final climb up throug the So Bahli-Ahli glacier towards the summit block.

Once above the 5750′ contour of the first “crux”, the wind picked up; keeping our heads down, we powered through the next 1000′ towards the summit. We reached the base of the summit block around 12:15 PM; as previously mentioned, the summit block was icy and firm. We gladly watched two skiers ahead of us boot up halfway and decide that crampons were needed. We strapped on our own crampons and headed on up, bringing our ice axes, rope, and pickets for the top.

We booted our way up to the summit; in terms of steepness, it is comparable to the Pearly Gates of Mt. Hood.

The summit was crystal clear! To the north we could see Baker and Shuksan, to the south Glacier Peak and Rainier. WHAT A DAY!

Knowing full well we still had many hours ahead of us, we spent little time idle on the summit. Dan and Ian took the picket and set up a rappel for the short steep section. As I mentioned earlier, you can climb up and down without a rope, but bringing one certainly makes the top section much safer and less of a variable. I rappelled down first; then came the two skiers who climbed up ahead of us; lastly came Ian and Dan. We were back at our skis by 1:15 PM, transitioning for the downhill and ready for the soft powder we had climbed up!

We alternated our descent, dropping down a few hundred feet at a time, one by one. The snow was beautifully soft and stable! We navigated back along our skin track to the ridge above the steep rollover.

We each took the steep rollover one at a time; jump turns made this section a bit exhausting. Once below the roll over, the biggest trick was skiing down through the glacier. Following our skin track, we were able to navigate the crevasses fairly easily, noting where we had crossed on our way up.

We kept to skier’s left below the avalanche debris to avoid a choppy and icy ride. Once below the debris, around the 2800′ contour, we sighted our tracks traversing the first ridgeline back into the Snow Gulch basin. There were a few places we had to sidestep back up across the ridge, but for the most part it was easy going. Skiing back down the Snow Gulch basin to the top of the bushwhack was annoying, and we mostly side-slipped our way through alders and undergrowth poking through the snowpack.

We were back at the top of the bushwhack at 3 PM; we took almost 40 minutes to eat, drink, and put our trail runners back on. By this point we were determined to get back to the cars before dark! We did NOT want to turn those headlamps back on. . .

The bushwhack down was surprisingly better and faster than expected. I used roots and branches to balance my weight. We were down to the base of the bushwhack by 4:30 PM, where Ian and Dan re-filled their water bottles from Snow Gulch.

FINALLY! We reached the cars around 5:40 PM, a long and amazing day in the books. And it was still light out! We had achieved our goal. No headlamps!