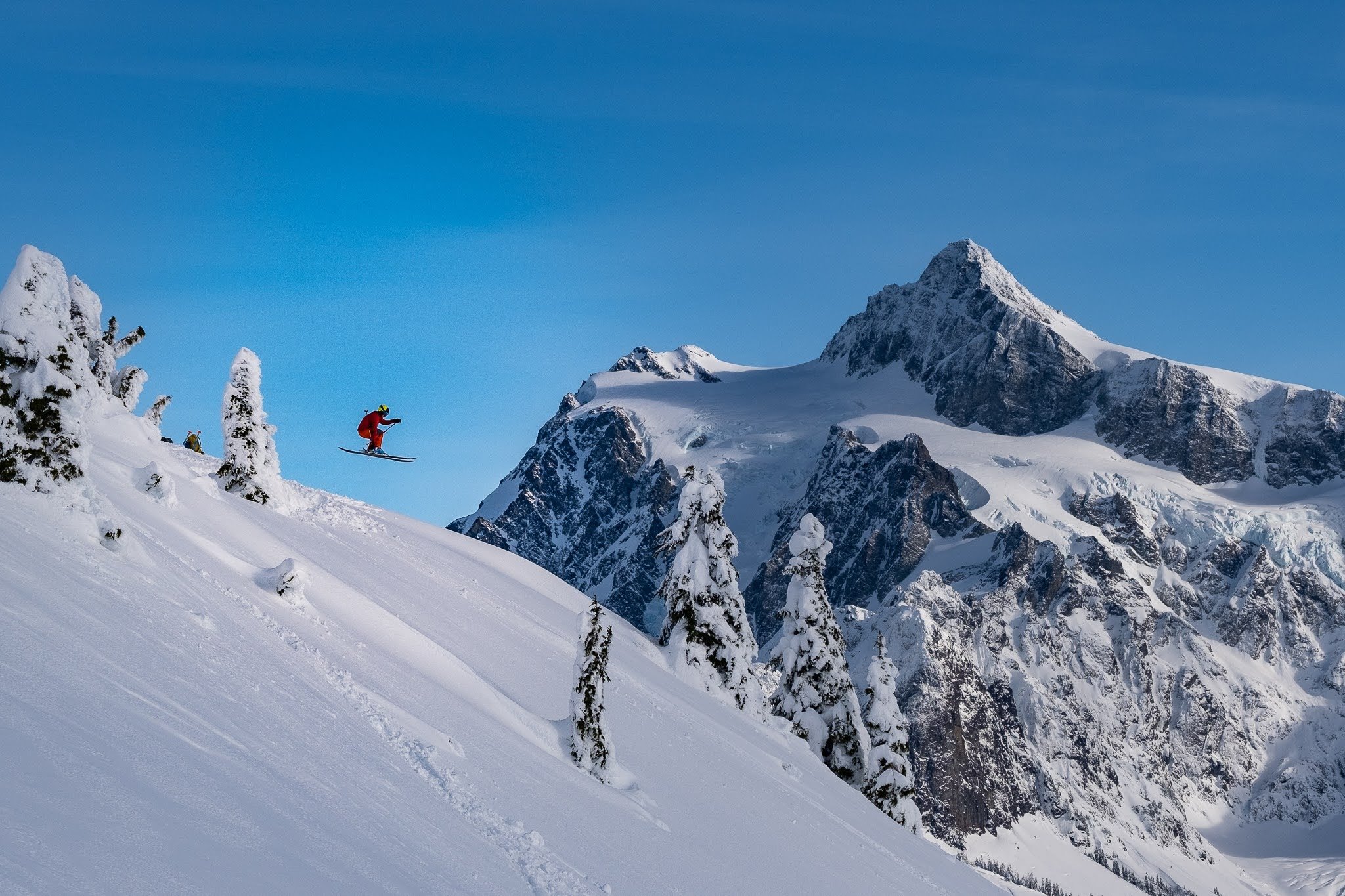 Kyle and I had been skiing for three straight days over Thanksgiving weekend, skiing Tye Peak, the Sheep Lake couloir, and then a burly day on Jim Hill. Would we make it a fourth? After getting back home from Jim Hill we were unsure what our plans were going to be. Intense sun on Friday had all but baked most of the southern aspects…but we still had a feeling that there was powder to find, hidden away in the northern aspects.

At the last minute we got some info from a friend that there was still good snow in the Baker backcountry, so we shot a text to Jon, who lives in Bellingham, and set up a plan. Kyle and Jon had skied many days together in the Baker backcountry, and knew that Ptarmigan Ridge might still have some good snow to explore. We set out alarms for half past early and made the drive up north.

Sunday was forecast to be a high pressure, bluebird day…in NOVEMBER! The forecast was for stable, firm conditions…only a few inches of snow had fallen in the last few days and the snow had plenty of time to settle. Winds were expected to pick up throughout the day as a storm came through Sunday night, so we made sure to keep our eye on the horizon.

We slapped on skins at the Bagley Lakes trailhead and began skinning up towards Artist Point. The morning glow over Winchester, Goat, and Larrabee was stunning.

Touring up to Artist Point, I was surprised at how few tracks I could see below Table Mountain. Sure, people had bombed the Blueberry Chutes, but there was still plenty of un-tracked snow. For a weekend of clear weather in the Baker area, this surprised me.

We hopped up and over Artist Point, aiming to make it out towards the Coleman Pinnacle.

The snow on the south aspect coming off Artist Point was pretty garbage windboard; winds were gusting up to 30 mph at points on our traverse out towards Coleman Pinnacle, higher than forecast (at least by the models I looked at). Even on the leeward sides of the ridge, the snow was scoured in places…where was all the powder?!? “Probably in Canada,” remarked Jon.

We decided to cut short and turn around closer to Point 5830 along Ptarmigan Ridge, heading back for Video Peak (a.k.a. Ptarmigan Perch), which Kyle and Jon had skied a few times before. We skied off the NE side of Peak 5830 and it the snow made for a good time…probably better photos.

We started to make our way back towards Video Peak, but not before we decided to get a nice run down facing Shuksan. The eastern facing slopes appeared better than the western slopes on the other side of the ridge, and the snow delivered.

We started to find better and better snow on our way back towards Video Peak, on sheltered eastern aspects. Surprising…but we were happy with it. On our skin towards Video, Kyle and Jon spotted a bowl that was PERFECT for building a jump, and with Shuksan along the skyline it would make for an epic photo. They spent around 30 minutes building a kicker, while I got in a few laps skiing on the SE slopes of Video. Then, I lined up for the shot.

The ramp was so good, I have to give them credit:

The lighting in the afternoon was serene, and Jon and Kyle took a few more laps on the jump before we skied off the N side of Video and began to head back in towards Table Mountain.

As the light continued to fade into the clouds, we skied off the N face of Video Peak…Kyle opted to take a gully down that looked narrow; Jon and I looked on and decided to ski the more open N face.

We skinned back up to the eastern saddle of Table Mountain and Kyle convinced us for one last shot off the N side. There were STILL fresh tracks, even at the end of the day! Where had everyone been skiing?!

Overall, the day was absolute pure fun with so many spectacular views. As a skier and photographer, today filled both appetites fully.