Turning around on N Buttress Couloir of Colchuck, Colchuck Glacier

HomeTurning around on N Buttress Couloir of Colchuck, Colchuck Glacier 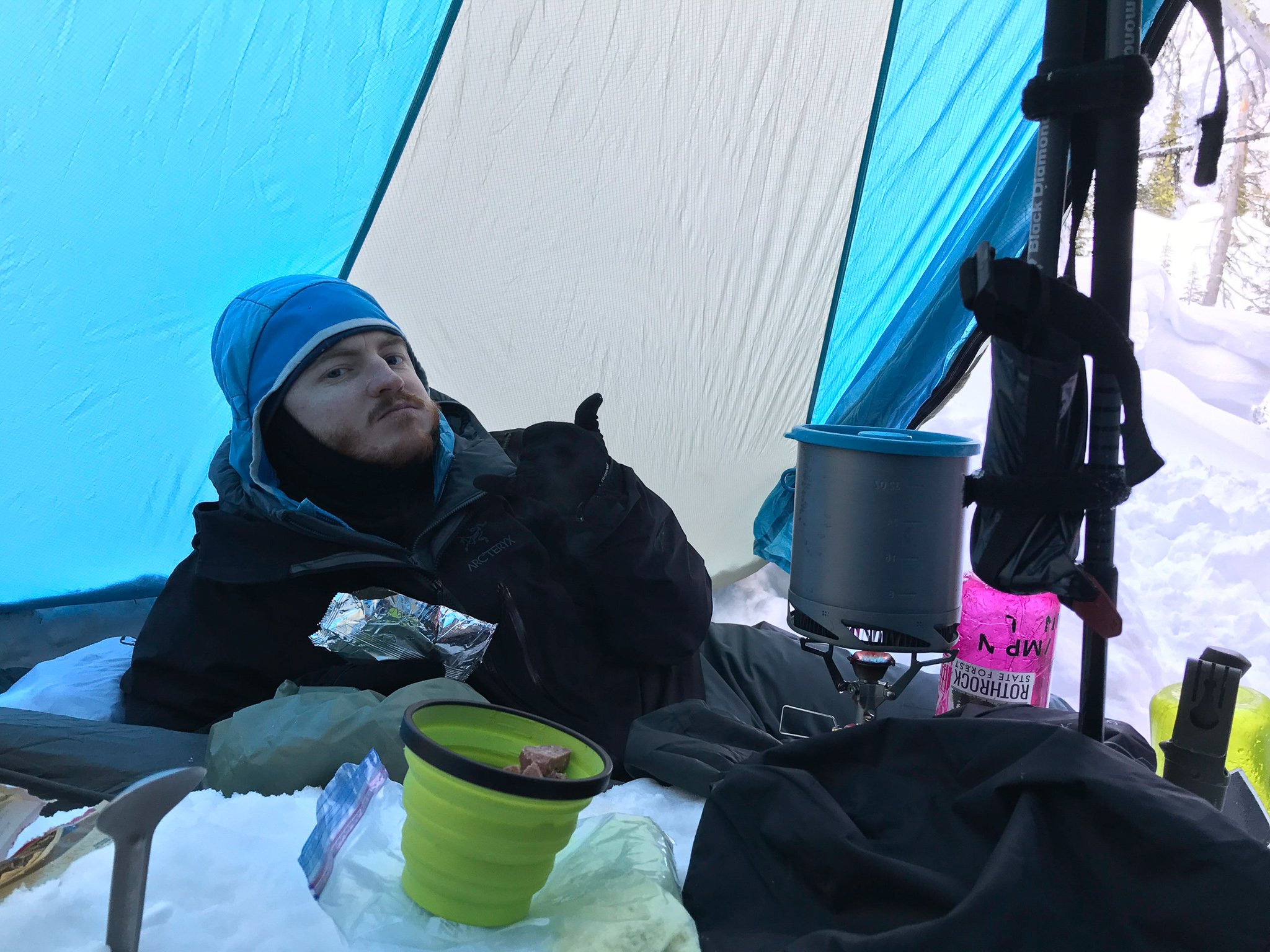 The Team: myself, Chris Sommer

Chris and I had met up earlier in the month for a tour of Mount Saint Helens (see previous report) and we were stoked to be getting out on another adventure together. Throughout the week a storm had been developing for Friday night / Saturday morning, appearing to hit the Cascade Crest the hardest. Chris had thrown out the idea of the Enchantments area, on the east side of the crest, specifically the North Buttress Couloir of Colchuck Peak. A steep snow climb with some mixed sections, the couloir seemed like an interesting objective. We decided to monitor the conditions throughout the week, and agreed on the lower angle option of the Colchuck Glacier as an appropriate backup.

We checked in with one another on Thursday night and gave the green light. The snow forecasts for Leavenworth and the Enchantments area had gone down from previous estimates; now, it appeared Saturday morning would just be mixed flurries. We agreed to meet up at 4 AM Saturday morning for the drive up to Icicle Creek Road, just outside of Leavenworth.

The drive over Stevens Pass was certainly entertaining, as powder dumped from the sky. Once over the crest, though, the snow subsided and clear, morning skies welcomed us into Leavenworth.

We loaded up our gas tank one last time and drove up Icicle Creek Road to the Colchuck Lake trailhead road. Just like a few weeks prior, when I had skied down the road on my Enchantments Traverse (see report), we parked our car on Icicle Creek Road and prepared for the skin up towards Colchuck Lake. With nearly 50 pounds worth of overnight gear, ropes, ice axes, and other climbing gear, it was going to be a trudge.

As we skinned up the road, snow began to dump from the sky. HUH? It was brief, but took us by surprise. Just like the surprise when Chris’ carbon fiber pole broke as he tried to adjust his bindings. OH NO! Fortunately, nothing a little duct tape can’t fix.

We reached the Colchuck Lake Trailhead at approximately 10:45 AM, much slower than we had hoped. We had hoped to be up at Colchuck Lake within 4 hours. . . that did not seem to be happening today. We were fine with it, though, beautiful blue skies above, and also 50 pound packs strapped on.

The track up towards Colchuck Lake was just as tedious as I had remembered from a few weeks earlier, only icier and more rutted out than last time. Snowshoers, and presumably other skiers, made the path extremely easy to follow, but definitely not the most enjoyable skin track. Fortunately, the weather was pleasant, and we took our sweet time, switching back and forth up Mountaineer Creek.

By 11:50 AM we had reached the first footbridge and began the climb up towards Colchuck Lake; by 2:30 PM we had reached the lake. 6.5 hours up to the lake?!?!?! Well, we certainly were not setting any FKTs this weekend, but we were in no rush. Along the way up Mountaineer Creek, Chris had spotted an interesting ice flow, and we pulled off the trail to examine it and practice drilling in ice screws.

Upon cresting Colchuck Lake, we were struck with Dragontail Peak, looming large on a clear day. WOW! We could see the Triple Couloirs route, full of snow; we could see the Colchuck Glacier, also full of newly fallen powder; and we looked up at our intended route for tomorrow, the North Buttress Couloir of Colchuck Peak. Well. . . that one looked snowy too!

We pulled off of the lake and picked a protected camp spot for the night. Winds were supposed to be mild and low, but temperatures were also supposed to dip, and we knew that camping in the trees would provide us more warmth and shelter than on the lakeside.

PHEW! We dumped our monstrous packs onto the snow and started to set up our camp. We brought along Chris’ Mega Light; we dug out some beds, laid down our sleeping pads, and fired up the stove. Dinner time! We hung out as the light faded, relaxed and ready for another big day ahead.

We were up at 5 AM, ready for our attempt on the North Buttress Couloir of Colchuck Peak. We switched on the stove for some morning coffee, packed up our things, and began skinning towards the base of Colchuck. We brought with us a multitude of gear, not knowing what conditions would be like: pickets, a rope, ice axes, a few ice screws, and some cams, nuts, etc.

At the base of the couloir, we mapped out a plan for the day; we were at the base around 7:30 AM. We agreed that our goal was to hit the “notch” in the couloir, which would put us out on the NW face, within 3 hours; if we weren’t at the notch within 4 hours, we would turn around. We had read trip reports that from lake to summit ranged from 4-8 hours, so we felt this was a reasonable turn around time. We didn’t want to be out too late on the face, or on the couloir, as the sun would affect the snow quality and stability, even on the northern aspects.

I set the skin track up the initial slopes from the lake, zigging and zagging back and forth; we hugged close to the North Buttress of Colchuck at the top of the slope, cutting across rather than shifting to climber’s left on the Colchuck Glacier. We were comfortable with the snow stability, but in shakier conditions this route would be more exposed than remaining to climber’s left along the ridge adjacent to the Colchuck Glacier.

By 9 AM, we were at the base of the couloir, and not impressed by the conditions. It was FULL of sugar powder, nearly up to our waist once we took off our skis. Chris tried to swim through it for nearly an hour, pushing his way towards more consolidated snow. We made it maybe 300 feet by 10 AM, and stopped for a quick check-in conversation.

Turning around is always hard, but sometimes it just makes sense. This time was one of those. Here’s what was going through our minds:

Feeling we made the right decision, we headed down from the North Buttress Couloir and towards the Colchuck Glacier. We had seen other skiers throughout the day making their way to the glacier, and the turns looked SWEET! We agreed on a turn around time of 2 PM for the top of the glacier, as we wanted to be back at the cars before dark.

The tracks up the Colchuck Glacier had been cut by skiers earlier in the day, so it was just about grinding out kick turns and skinning up. Winds were low, temperatures were pleasant, and there was good snow to be had! Occasionally there were icy spots underneath the powder, probably from the melting that occurred earlier in the week with the warm spell the region had seen.

By 1:45 PM, we were on top, with a beautiful view over the Alpine Lakes Wilderness. Wind whipped at the col between Dragontail and Colchuck, and we took refuge in a small nook of rocks. We ate a quick snack and prepared for the ride down. This one was going to be sweet!

And sweet it was! There was blower powder, nice and soft. We floated down Colchuck glacier towards the lake, hooting and hollering in excitement.

We were back down at the lake by 2:30 PM, heading towards our camp to pack up. We had our fun, now we were preparing for the way down. . . which was NOT going to be fun.

By 3:30 PM we were at the outlet of Colchuck Lake, preparing for the way down Mountaineer Creek. Last time I was here, I had skied down the skin track, which was treacherous, tedious, and overall pretty un-enjoyable. This time, I decided to strap my skis to my pack and boot it. . . and I was VERY glad with my decision. The snowpack was firm and trodden by many snowshoers, so I didn’t really sink into the snow at all.

I was down at the higher footbridge over Mountaineer Creek by 4:30 PM (within one hour); by 5 PM I was at the lower footbridge. I felt that booting down was much more enjoyable, as I did not have to worry about skiing through the rutted out skin track, which was icy, tight, and cut by snowshoers.

Once I was past the lower footbridge, I clicked into my skis again. . . only for about 5 minutes! The skinning on icy crust was way worse than just booting it, in my opinion, so once again I strapped my skis onto my pack and continued the walk out to the trailhead.

I was determined to make it to the car by dark! I did NOT want to turn out that headlamp. . . Chris and I made it to the trailhead by 5:30 PM, and we knew sunset would be around 6:30 PM. We slapped on our climbing skins and raced down the road towards Icicle Creek road.

From Colchuck Lake trailhead, the road is flat and undulating for the first mile or so; around where Eightmile Creek meets up with the road, the slope increases, and you can begin to ski down towards Icicle Creek. By 6 PM, we were at this junction, and excited to be on the downhill!

Light was slipping away fast. . . but we made it! At the cars at 6:40 PM, just before I would need to click on my headlamp. PHEW! I was glad to take off that heavy pack.

The story doesn’t end here, though, unfortunately. We were on the drive back to Seattle, crossing over Stevens Pass, when I had an OH MY GOD. . . I LEFT MY CAMERA!!

I had momentarily put my camera on the roof of my car when I was stowing all my things in the trunk, and like a complete idiot, had left it there. Driving away without it, I assumed it had fallen off the roof and onto Icicle Creek road somewhere. I turned to Chris and asked if he was willing to turn around. Like an awesome friend, he said, “Let’s go!”

In the dark of the night, driving through the twists and turns of Icicle Creek road, I pushed hard on the brakes when Chris shouted, “IT’S THERE!” It had just looked like a rock to me, but there it was, sitting in the middle of the road, maybe a few hundred yards from the trailhead.

Relieved to have found it, I knew it was broken. . . and sure enough it was. But I had found it. A lesson learned: don’t put anything on the roof of your car!