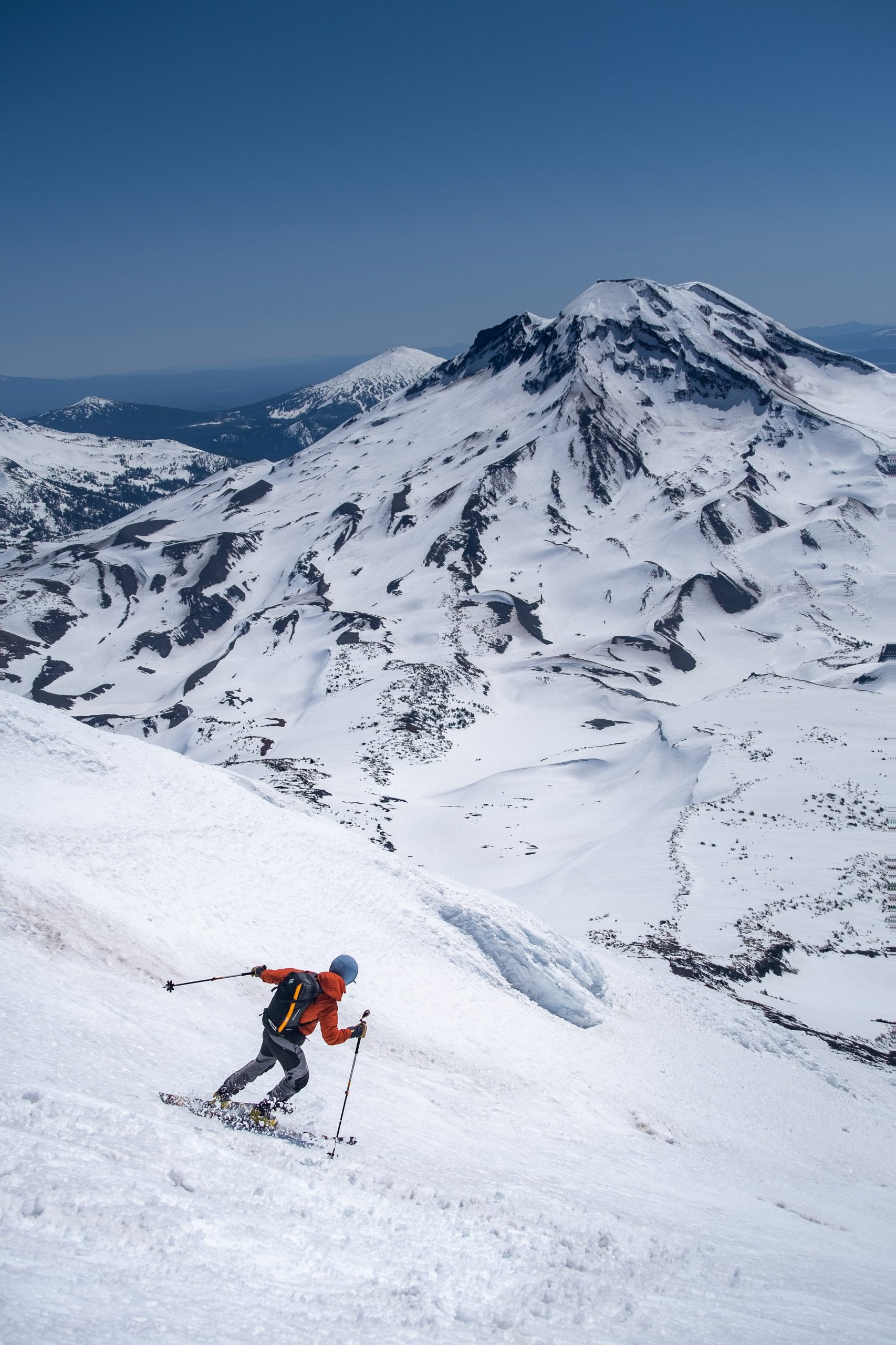 A heat wave was hitting Washington…80 degrees in the city in April! YIKES! The deep Washington snowpack hadn’t seen temperatures like that since…well, the year before. With freezing levels above 10,000′, I had concerns about large wet slides and cornice shedding, so instead of trying to head into touchy and unpredictable alpine in Washington, Chris Sommer, Chris Zammit, Dan Stirling, and I opted to make the long drive down to the Three Sisters in Oregon. Oregon’s snowpack had already gone more transition through melt-freeze than the Washington snowpack had, so it was a more reliable bet for corn than Washington.

We went back and forth, but ultimately opted to go for an overnight trip from Pole Creek trailhead. I’ll spare all the text messages about what options we debated…We brought a Black Diamond Mega Mid tent for the four of us and planned to camp at a bench below North and Middle Sister, around 4 miles and 1,500′ in from Pole Creek. The intent was to minimize the time carrying heavy packs. Sure…it made the trip out to South Sister and back to Pole Creek a LONG day of skinning, but eh…training, right? Or something like that.

We debated the North Sister, the only technically involved one of the three peaks. I personally opted to forego the true summit, not even bringing a harness or two tools. Mentally I just didn’t want to deal with the Terrible Traverse or the exposed climbing up to the summit, let alone the rappel down from the summit block. In this report I’ll include Chris and Dan’s beta, but Chris Zammit and I very much enjoyed our extra credit ski of Middle Sister instead. They chose to bring two 60m single ropes, a few nuts and a few ice screws, as well as one picket each.

Dan and I headed down from Seattle at 1 PM, taking I-90 east to Ellensburg and then south along US-97, rather than taking I-5. We were very glad…as both Chris’ hit traffic and got to the trailhead quite late.

We were able to drive all the way to the Pole Creek trailhead…well, about 200 yards short because of a small snow bank that melted out over the course of the weekend. We woke up at 5 AM and began moving by 615 AM towards camp. Snow was patchy starting out for the first 0.5 mile or so but quickly became full on and very supportive.

Chris Zammit and I opted to traverse higher than the trail starts out, feeling it would get us out of timberline faster than the trail, which initially contours and then gains elevation. For the most part it was a good decision, although we did have to climb in and out of a few ravines which was annoying at times. No ski crampons were needed, even though we packed them. The crust was a bit breakable and quite edge-able. Before long we were at our camp, dumping our gear and getting ready to head up towards North Sister.

Chris Sommer and Dan headed up to North Sister with heavy packs: ropes, pickets, screws, nuts, ice tools. Chris Zammit and I were delighted by our tiny little day packs: water, food, wind shell, crampons…much less stuff. We skinned up to the base of the S face of North Sister and decided to bootpack up the looker’s left side of it, rather than try to skin the early morning crust. It was cruiser. Unfortunately we stopped along the ridge by mistake, rather than going to the highest point that we could have skied from; we mistook our position along the ridgeline. Oh well…we still got some good pre-corn!

Dan and Chris S opted to skin through Prouty col to the northern slopes of North Sister and boot up the west side of the S ridge. They reported the conditions to be rimy and icy, as opposed to a firm supportable crust that Chris Z and I encountered on the east side. Chris S and Dan continued up the ridge towards the Terrible Traverse. Their beta for the rest of the trip, summarized:

Chris Z and I had a MUCH different experience. From our false high point we skied pre-corn on the south slopes of North Sister back down to the bowl beneath Prouty Point. We knew that the snow would just improve through the day and even this pre-corn was good!

We threw skins back on and skinned up through the col to the north of Prouty Point to swing around to the west side of Middle Sister. From the saddle between Prouty Point and Middle Sister we climbed on the west side of the north ridge up Middle Sister. The western slopes had some rime but overall were very easy to climb, like little stair steps of annoying ice. The 1,200′ or so climb went by fast! From the top I looked out at South Sister, Bachelor, North Sister (where I could see Dan and Chris still…lol), and the vastness of Oregon.

From the summit Chris Zammit and I skied down an initial roll and paused to look down a gully dropping east off the south shoulder of Middle Sister. It looked steep and awesome! There were some tracks in it already; we couldn’t see past a roll-over a ways down the gully so we opted to pass on it for the day, sticking to the known south ridge.

Instead we skied down the wide southern ridge, which was mixed with some rocks and rime initially, but gave way to nice and wide corn turns.

There are SO many lines to choose from off of Middle Sister, honestly you can’t go wrong.

We took our first run down to around 7,200′ above Chambers Lake and found an awesome rock to sit down on, munch on some food, and just enjoy the sun. I often focus on going fast all day long, but the change of pace was really nice. We opted for another lap on the south side, while Chris and Dan were still making their way down from North Sister. Once we got back up towards the ridge, around 8,800′, we called it a day and traversed north on the eastern slopes of Middle Sister back towards Prouty Point. We were able to traverse most of the way, only having to boot a small section over a wind lip.

Now I know this “traverse” is completely opposite of what one would normally do when coming down off Middle Sister…but we were camped between Middle and North Sister so… Normally you’d just keep taking your fall line descent off Middle Sister towards South Sister as far as you could.

We returned to our camp via one of the best corn runs I have had in a long while. A few thousand feet of pure corn off of Prouty Point! Chris Z and I hooted and hollered our way all the way down.

Back at camp, we got on the radios and started chatting with Chris S and Dan. They were having a LONG day. The descent off Middle Sister was involved and slow, and they were making their way up Middle Sister around 4 PM or so. They opted to boot down the north ridge of Middle Sister and then ski down from Prouty Point. By the time they had done this, they missed the corn and got re-frozen crust. So basically they missed all the good skiing for the day. Oh well…we had a great time in camp, chatting about the day, eating food, and marvelling at Chris’ HORRIBLE blisters.

Chris opted to sit out the next day because, well, just look at those blisters. Dan S, Chris Z, and I would get up at 6 and make the LONG skin out to South Sister…the inefficient and redundantly long Three Sisters Traverse (minus North Sister)…quite the name right?!?

We initially were hoping to head directly south towards South Sister and use a weakness in the NE face of South Sister to make our way up, but as we skinned out we saw that it clearly did not go. So we opted to traverse to the W over the saddle between Middle and South Sister to gain the NW ridge of South Sister. The NW ridge is basically just a long ramp of rime and steep snow, nothing more than 35-40 degrees. I had a good rhythm going so I made quick progress up the ridge; I waited at the top for Chris Z and Dan as they made their way up.

From the summit of South Sister we skied south towards Bachelor and began to swing east around 9,200′ to ski down onto the Lewis Glacier. The corn was awesome down the Lewis Glacier! I started to make a traverse to the north around 7,500′ above Green Lakes to try and keep as much elevation and skiing as I could. Dan S and Chris Z unfortunately descended down a bit too far and had to skin back up to my traverse spot.

And thus began the endless skin back towards our camp and then out to Pole Creek. I kept skins on nearly the whole way, as I descended hummocky terrain towards Carver Lake, then Chambers Lake, then Camp Lake, then our camp. The snow was mush at this point…lovely. My skins were soaked.

The ski out from our camp to Pole Creek was semi-miserable. The snow was so wet that the low angle skiing wasn’t quite possible, so I downhill skinned most of the way, until I took my skis and boots off and proceeded to walk and posthole for another mile or so to the car, where Chris S was waiting (he had descended earlier in the day, since he sat out due to blisters).

A group of skiers had told Chris S that the move was actually to ascend slightly up the SE ridge of North Sister and then ski as high as possible down towards Pole Creek. Oh well….

The snow coverage was still quite good, I do have to admit. It was nearly full all the way to 0.5 miles within Pole Creek. I assume that it will be melting FAST!