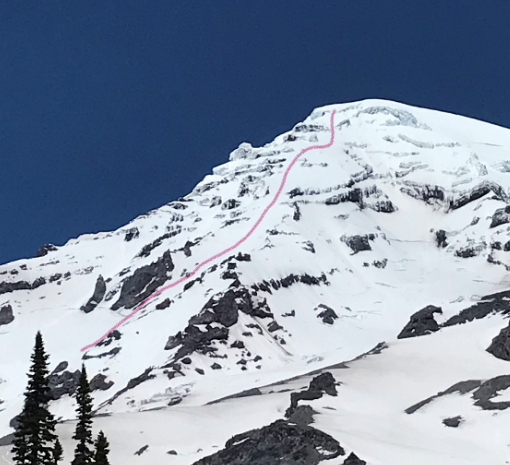 Summer had finally arrived with a vengeance, as a heat wave brought in the first corn cycle of the year. Temperatures in the lowlands would hit the upper 80s and freezing levels were forecasted to be around 13,000′. With that forecast, the volcanoes were the only viable option for good skiing.

The Success Couloir doesn’t get as much hype as the Fuhrer Finger on Mt. Rainier, probably because it’s not written about in a book. However, the couloir deserves respect: it’s fall line, 45 degrees for 3,500′, with another 3,000′ of skiing below, making for a 7,000′ descent off Point Success. It’s no cake walk though: to start, you need to descend above cliff bands on Point Success to navigate the Kautz Glacier Headwall, where a slip would be lethal.

With high freezing levels (13,000′) and a warm front approaching later in the weekend, Nick and I agreed that Saturday was the best day to give it a go. I drove down Friday night to get a single-push permit and we slept at the Comet Falls parking lot, and would shuttle another car up to Paradise in the morning.

Anthony, Nick, and I woke up at 12:30 AM and drove up to Paradise. It was warm but breezy, and the night was quite clear. Surprisingly, it made for good refreeze conditions, something we didn’t expect.

We planned for the ascent to take us ~8 hours to the summit, so we left at 1:30 AM with the intent of topping out between 9-10 AM. We wanted to be on the line early before the warmup occurred. The Muir Snowfield was cruiser, and we reached the shelter in 2 hours 45 minutes.

We roped up at Muir and threw on crampons, intending to take the Ingraham Direct route, which we had heard was in good shape. We saw numerous climbing parties on their way down, some turning around and others just descending from the summit. Overall, not much to report on the ascent: the ID is cruiser, direct, and in great shape right now.

We took the climb very chill and made it up tot he summit in almost exactly 8 hours. All of us felt surprisingly good for a 12:30 AM wakeup and Rainier single-push. We spent a few minutes on the summit, which was windless and warm, but opted to head over to Point Success without much delay, as we predicted there would be some shenanigans getting into the line.

In my head, I had visualized the hardest part of the line to be the roll-over to skier’s left once you are below the cliff bands. I was wrong…

We reached Point Success by 10 AM or so and flipped to skis to start our descent. From Point Success, the line descends a ~30 degree ramp to a cliff band, where you can either downclimb or rappel. This ramp was coral reef-like blue ice, edgeable but not for the faint of heart. We skied too far skier’s left and ended up having to traverse back skier’s right to get to the correct spot to rappel/downclimb. I did not like the idea of sidestepping water ice on my ski edge, so I found a safe spot to put on crampons and downclimbed to the rappel.

Anthony opted to downclimb, as the snow was soft and boot penetrable. I didn’t feel comfortable doing so, and having brought a picket for this exact spot, opted to have us set up a rappel. Nick dug a T-trench and we set up a single 30m rappel to get us down through the cliff band.

This was easily the most sketchy part of the line. Once we were down below the cliff, we switched to skis and began our descent. Nick led first through the roll-over, which started as soft snow but quickly switched to firm/ice with a thin layer of corn on top. It was tricky snow…just soft enough to get your speed going but then throw your off balance every few turns.

Once we got below 13,000′, the snow improved and there was less ice underneath. We started to make larger descents, leapfrogging every 700′ or so. The line is SO fall-line, straight down for thousands of feet with a consistent pitch. We were all giddy as we skied ripper corn down the line.

There was a small schrund at the bottom but it was still closed on skier’s right and didn’t require any hucking, just keep the tips up. Once we got past the schrund we took a break to look back up at the line. WOOOOOO! What an awesome descent in great conditions.

We continued to ski down with good snow al the way down to 8,000′. We crossed over a moraine separating the Success Glacier from the Kautz Glacier, which was dry dirt/rocks.

Once on the Kautz Glacier, we started our traverse over towards Van Trump Creek. The exit was not trivial: We skied down a drainage below the Wapowety Cleaver that terminated in a waterfall. We ended up finding a way to downclimb skier’s left, where we jumped a small moat.

Once past the waterfall, we skied down skier’s left above Van Trump Creek and had to boot up a small section to get to the Van Trump trail. Once we reached the trail crest, we followed it down towards Comet Falls.

We were able to ski almost all the way to Comet Falls before having to take our skis off. The creek crossing got our boots wet, but oh well…we were basically done at that point.

All in all, around 13 hours car-to-car with 7,000′ of great skiing, some scary ice, and another summit of Rainier. WHEW!

*Sadly no fancy photos this time, as the skiing was heads up and didn’t want to stake the camera out