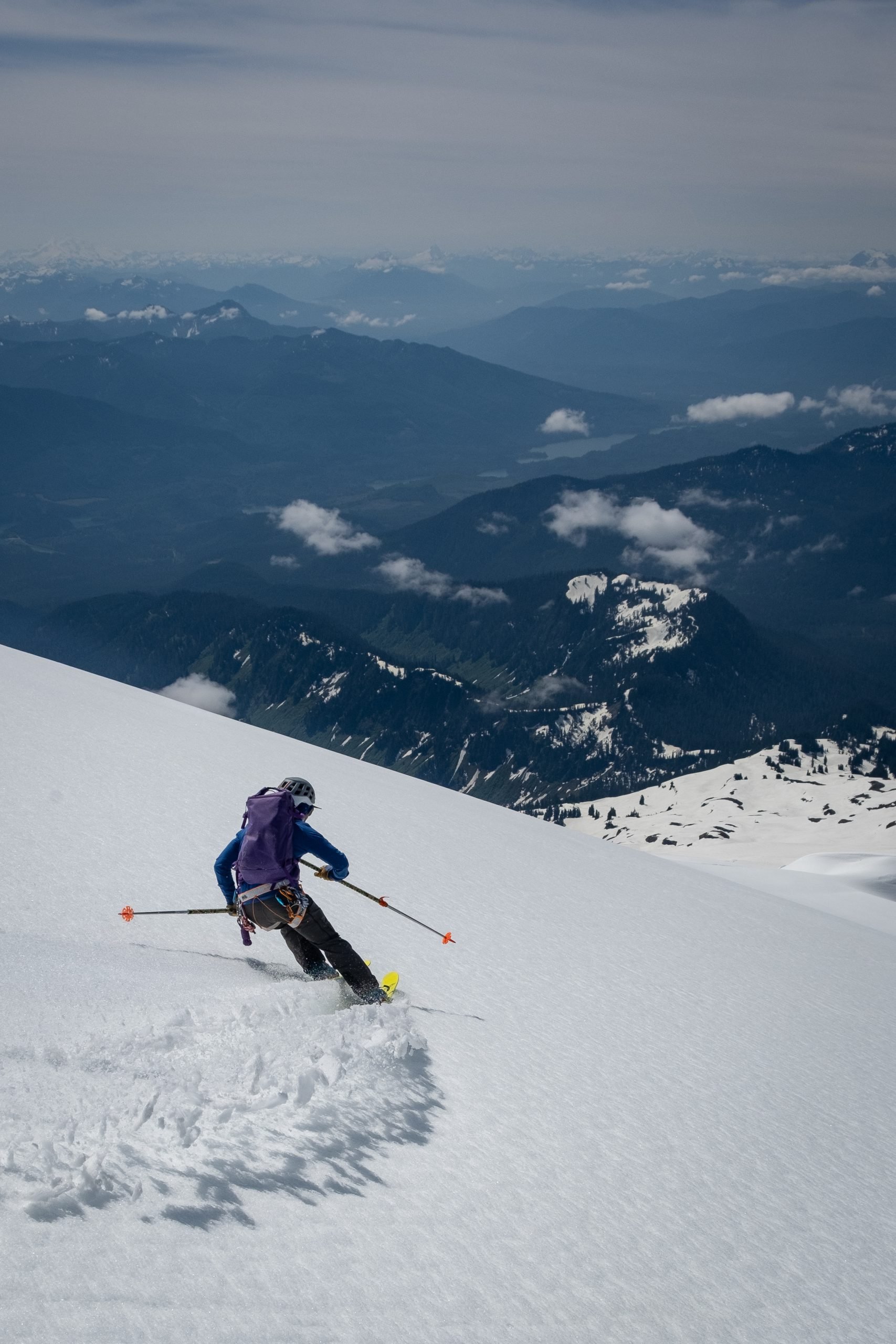 A sun-filled June now turned to July and I wanted to keep the corn harvesting going! Saturday’s forecast looked marginal for a refreeze, very dependent on if the overnight clouds stayed away and allowed for radiative cooling of the glaciers. After doing two Rainier trips, I wanted to get back on Mt. Baker, as I hadn’t skied it yet this year.

Sammy, Joe, and I made a plan to ski the Squak Glacier on Mt. Baker, a low-angle yet sendy corn ski on the south side. It’s fall-line, very direct, and very chill…a perfect recipe for a fun day out. Since we were dubious about the overnight refreeze, we set out alarms for 2:30 AM and agreed on an early 3 AM start. We figured that either: we’d be correct in predicting that corn would happen earlier than normal, OR that we’d have to wait a long time on the summit. We hedged our bet towards corn o’clock coming early and went to sleep for a few hours.

The Squak had gotten a lot of attention over the last week of high pressure, so there was a good bootpack in through the low elevation snow that covered most of the trail. We followed the trail for the first 1.5 miles or so, until 4,000′. We then took a climber’s left hand turn and started to ‘shwack a bit up a creek north towards a clearing at the head of the drainage beneath the Squak Glacier. It wasn’t that bad and went by fast, but we did hear running water underneath some of the snow bridges. Tread lightly…

We popped out of the trees just before sunrise and caught first light on Shuksan…wow the views are better on Baker than they are on Rainier. The North Cascades put on a lightshow for us as we skinned up very firm snow that had clearly re-frozen.

A few parties ahead of us slipped around a bit before we decided to switch to boot crampons around 5,600′. Some other skiers kept ski crampons on, but we felt that boot crampons were still very efficient, as the snow surface was supportable and firm.

We knew we were going to be ‘early’, but still kept on trucking along…we met up with DOZENS of climbers at the Sherman Crater rest spot just before the traverse up along the Roman Wall. There were at least 50 other people on the mountain today…traffic jams abound! We tried to stay out of the way of all the rope teams that were a tangled mess on the bootpack up/down the Roman Wall.

We topped out the summit plateau at 6 hours for the day and headed over to the true summit to give it a ‘tag’. It was WINDY up top, which wasn’t a good recipe for our corn desires. We took a summit selfie, loitered around looking over at the Park Glacier Headwall (for another time…), and tried to find respite from the wind (we failed…).

Impatient and cold, we decided to head down the Roman Wall around 10:15 AM. We knew it would be firm, but we weren’t keen on waiting and getting cold. It was actually quite a fun ski! It was very smooth and planar and the firm surface made for good skiing. We took another brief break down at the crater to take off layers, before turning the corner to the top of the Squak Glacier.

We briefly booted up to the summit crater at the top of the Squak Glacier to get the full ‘fall-line’ descent of the Squak. Around 11 AM we dropped our line and…CORN O’CLOCK! Hell yeah…it was glorious smooth corn, 30 degree party, super-G style skiing. The consistency was so good…pure ripper.

We took little pause on our descent down, milking out every last ear of corn there was to be harvested. Within 5 minutes we had descended 3,000′ and were back in mank snow in the trees.