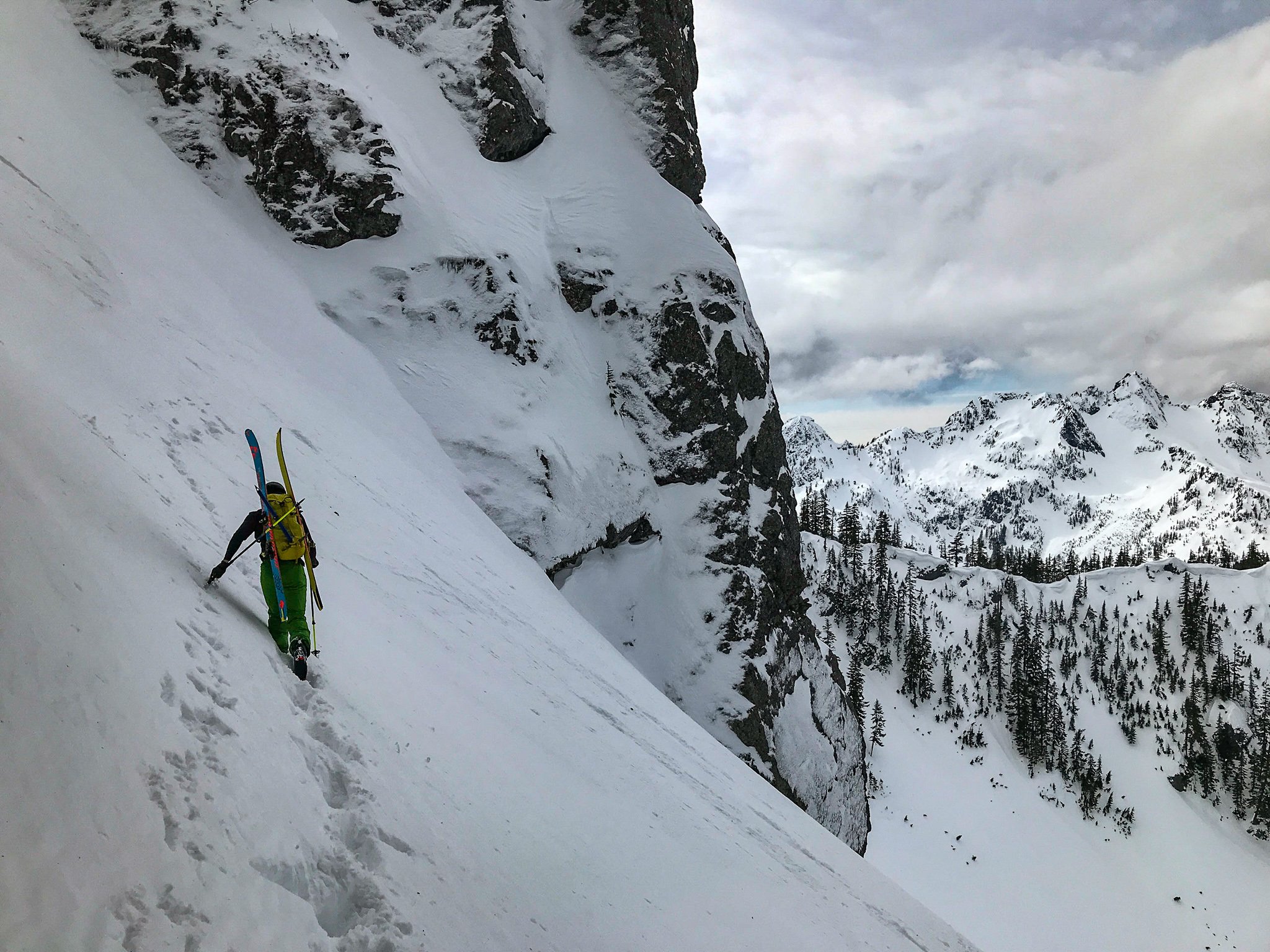 8 AM – realize have to change plans

8:45 AM – begin up towards Snoqualmie Mtn

Earlier in the week, Jonathan and I had been trying to make plans for a Friday ski tour; initially we were eyeing driving down to Mt. Hood, but conditions appeared less than ideal for a drive that long. A storm was brewing as well, scheduled to hit the Cascade Crest sometime Friday evening.

We started doing some more research on local options, as Snoqualmie Pass seemed to have great weather through the late afternoon on Friday. I read up on different couloirs off of Chair Peak and Snoqualmie Mountain, largely at the recommendation of two locals I had reached out to (thanks Kyle and Anthony!).

We turned our sights to a circumnavigation of Chair Peak (see a great write-up from Kyle McCrohan), beginning and ending in the Alpental parking lot/ Source Lake trailhead. Less than an hour from where I live, it was close, convenient, and amazing terrain.

Friday morning we met up at my place, packed up the car, gave one last look at the weather and avalanche bulletin for the day, and headed off. We arrived at the Alpental lot around 7:45 AM, when surprise #1 for the day came: we couldn’t access the Source Lake parking lot. Huh? What was going on??

We saw two other skiers/climbers in the parking lot, looking similarly confused. I ventured over to talk to them, as we both were slapping on our skins and getting ready to go (or so we thought).

Eric and Olivia were planning to climb the NE Buttress of Chair Peak, an awesome mountaineering objective in a similar region of travel as us. Eric walked over to the “CLOSED” sign, where there was a man parked in a truck, and brought back news. Avalanche control in the Alpental sidecountry and over I-90 would keep the Source Lake area closed until the crew was done. They were not scheduled to launch the helicopter until 10 AM, which was still hours away. BUMMER! We should have checked WSDOT first; it didn’t cross our minds on such a bluebird day with no snow forecasted, but we should have.

With all of our original objectives now out of the picture, we agreed to go out together for a “backup” tour: the Slot couloir. In researching options earlier in the week, I had read up on the Slot, a local classic line nestled on the north facing aspect of Snoqualmie Mountain. Eric and Olivia had skied it before, and were eager to give it another try.

We started out from the Alpental parking lot, just below the Phantom Slide path. There is a clear snowshoe/ski track up towards a waterfall, which is visible from the road.

Conditions were BEAUTIFUL: blue skies and warm. We knew that as the day went on, the south facing aspect of the Phantom Slide path would be cooked and slushy, so we kicked it into gear a bit.

Once we reached the base of the waterfall, we ducked into the trees, switching back and forth through the growth to avoid the cascade. From here on up, the skin track was on-and-off. It was clear people had been up here recently (Anthony, the local I mentioned, was up the day before), but tracks were melting out fast because of the warmth.

At times, the trees were thick. Just look at Eric getting lost in the branches!

As we continued up through the trees, we couldn’t help but gaze out at Chair Peak. Olivia and Eric looked on, eyeing their former objective.

Eventually, we reached a clearing in the trees up the Phantom Slide path, and we could look out onto Rainier and the Source Lake area behind us.

There were patches of crusty, icy snow now and then, a result of the warm temperatures throughout the week that melted and then re-froze the top layer. I found it manageable without ski crampons; Jonathan chose to use his.

We topped out around 11:45 AM, grabbed a snack, and started looking over and down into the Slot couloir.

The entry to the slot, based on Caltopo, is around 45-50 degrees, and can be notoriously icy and wind scoured at times. Today it was firm but chalky, manageable for some jump turns down the initial section.

I went first, side-slipping a turn and then scraping my way to a corner where I was out of the way of Eric, who went next.

Once below the top section, the snow looked AMAZING! The northern aspect of the Slot couloir seemed to have protected it from the sun, keeping the powder light.

What a run! Olivia dropped after Eric, then Jonathan finally.

That was FUN! We skied down to the base of Snoqualmie Mountain, where Olivia and Eric decided to call their day with celebratory beers.

Jonathan and I had one more run in us though: the Snot Couloir. The next-door neighbor to the Slot, the Snot has a tricky top section, nearing 60 degrees, that many rappel into. We planned to boot up the Snot and drop in below this section.

We started up towards the Snot around 12:45 PM, booting up through firm snow.

Jonathan and I alternated booting, switching off every 15 minutes or so. We managed to boot the 900′ or so vertical feet of the Snot in less than an hour. Just below the rappel entry, we clicked in for another sweet couloir.

We were done with the Snot by 2 PM or so; we quickly transitioned and followed Eric and Olivia’s path over the col of Snoqualmie Mountain.

We followed the tracks up the col, clicked in, and began skiing back down the Phantom Slide path. The snow on the southern aspect was now a thick slush, and with tired legs was exhausting to move through.

I knew that I should be veering to skier’s right to avoid the cascade, which we ducked into the trees on the uptrack to avoid, but I still managed to ski too far to skier’s left. I had to take my skis off to boot back up a ways.

By 3:40 PM, we were back at the cars, satisfied with an amazing day! We could feel the winds beginning to pick up, and noticed clouds and the storm beginning to further develop. We were glad we were done.