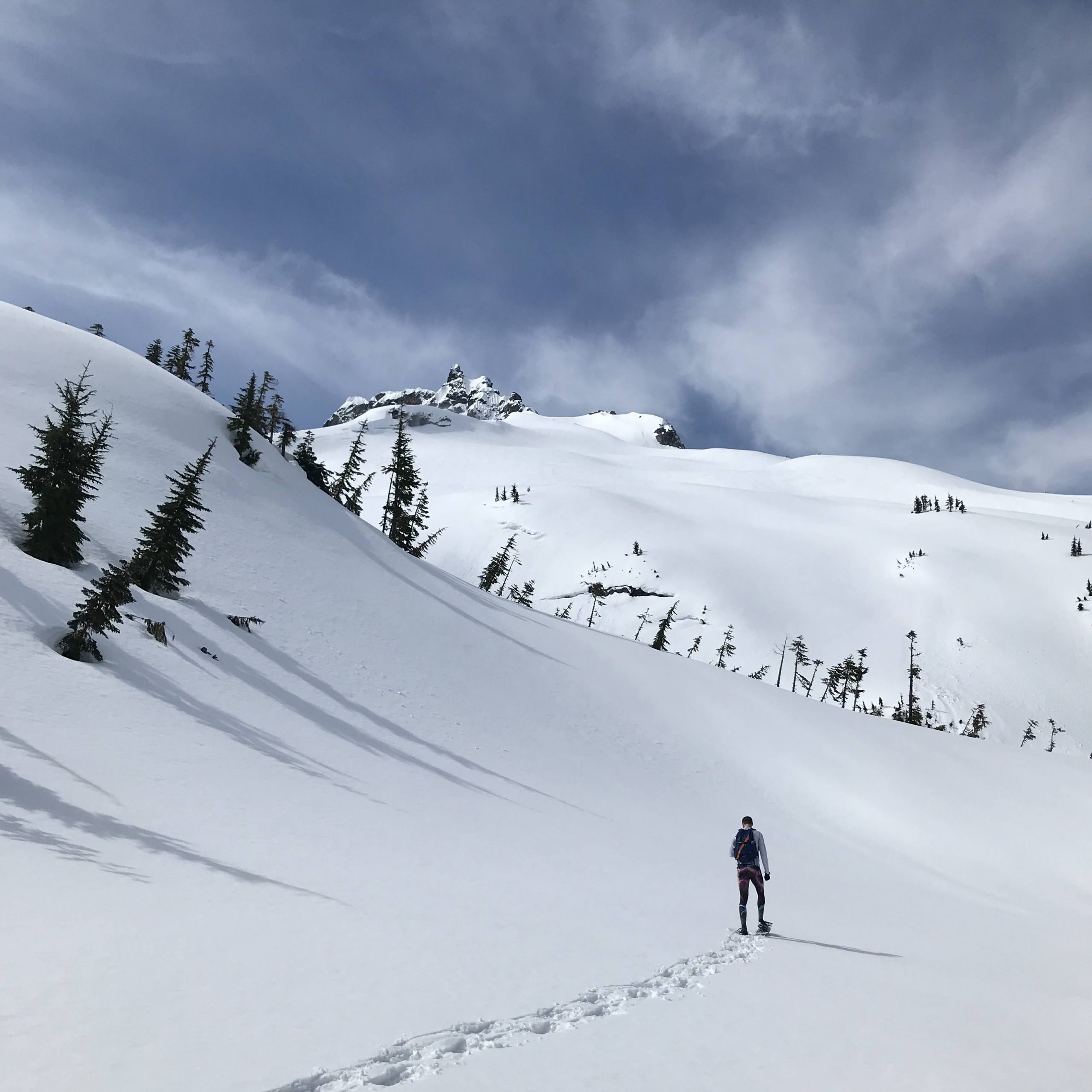 Tyler and I had been monitoring weather throughout the week in our normal routine of, “where can we go this weekend?!” The weather was looking marginal most places, as a weekend front appeared to be coming through. Friday looked promising, though, especially in the Mountain Loop region of the Cascades, near the towns of Arlington and Darrington.

Tyler is not a skier, and we had both been enjoying our trail runs together, so we came up with an idea: a two-day, trail run trip to the Mountain Loop region. The snow levels appeared to be hovering around 4000′ in most aspects, which would most certainly mean snow. Not a problem…we could bring SNOWshoes (or as my friend Kyle dubbed them, SLOWshoes).

We decided that we would set our sights on two peaks: Sloan Peak and Mt. Pugh, two striking mountains next to one another along the Mountain Loop Highway. We would camp out in my Honda Element (which I call the HOTELement) on Friday night between runs.

Friday looked clear, with no forecasted precipitation…Saturday on the other hand appeared to bring afternoon showers, and wind. We decided that we would try Sloan on Friday and Pugh on Saturday in the early morning, hopefully sneaking it in before the rain kicked in.

We had been reading into trip reports on Sloan, and we decided on approaching from the North Fork Sauk, rather than Bedal Creek because:

a) Bedal sounded like quite the ‘shwack, especially in variable snow

b) We could run the N Fork Sauk road

We took a dive into the road conditions on the USFS website, and found that the N Fork Sauk Road was closed 0.5 miles from the Mountain Loop Highway. We would have to run 4 miles along the road to the start of the climber’s trail. Fine by us!

We aimed to be hiking by 6 AM, so we agreed to leave Seattle by 3:30 AM. Bright and early!

3:25 at Tyler’s door and off we went. Roads were empty and skies were clear as we headed off towards Sloan. We loaded up the car with overnight gear: sleeping bags, pads, and plenty of food for the night.

By 5:45 AM we were rolling up to the “closed” section of the N Fork Sauk road. In the morning light, we could tell it was mucky and muddy. In different circumstances I would have tried to drive past it, but we had already planned for the run and we were looking forward to the miles. Plus, I did NOT want to get my car stuck.

We chuckled as we began to strap on our packs…the road run was going to be funny. I finagled my snowshoes onto the sides of my pack like a ski carry. Tyler used some climbing rope straps to secure his. Our packs were definitely going to wobble a bit.

By 6 AM, we were off and running. For the first few miles we kept a decent clip, around 9-10 minute miles. The road was pretty much flat, and the weather was PERFECT!

The climber’s trail on Sloan from N Fork Sauk follows the river for around half a mile, before crossing the RAGING N Fork Sauk River. We found it best to walk upstream and found a series of logjams that helped us in crossing. I would NOT advise trying to cross this river in early season conditions, especially alone. It is deep, swift, and powerful. That’s just my $0.02.

Once across the N Fork Sauk, we still had a few more crossings to do…particularly to cross the Cougar Creek. MAN…that water was COLD. It was an ice bath for our legs, but our legs weren’t even ready for it yet!

Once we managed across Cougar Creek, we pushed through some slide alder and the occasional DEVIL’S CLUB (ugh) to make our way back to the climber’s trail. Once we found it again, it was well-maintained and easy to follow. We could tell it would be a fun run on the way down!

Around 3,500′, just past a large waterfall, the snow began in earnest. We crossed the creek below the waterfall on a log, strapped on our snowshoes, and began chilling our feet. Nothing like cold AND wet!

The snowshoes certainly helped prevent us from postholing, but were somewhat (definitely) miserable for side-hilling and traversing. The snow in the trees was thick, wet, and consolidated; once we poked out of the trees, it became softer and was more wind-boarded.

At around 5,000′, we poked out of the trees and were overlooking a basin beneath Bedal Peak. There was a large bowl that appeared to be a terrain trap; we would ascend its left ridge and then cross over to the Sloan Glacier at the top of it.

It was a BEAUTIFULLY clear day! We could see Glacier Peak, Baker, Shuksan, Whitehorse, Three Fingers, everything for MILES. The Stuart Range popped out in the distance too! What a day for a Cascadian adventure.

The wind picked up once we transitioned over to the Sloan Glacier. The glacier was completely filled in by the spring snowpack, no crevasses to be seen.

We knew to aim for the left side of the cliff band marking the summit pyramid of Sloan. This would be where the “corkscrew” would start, and the going would get steep. We brought ice axes and microspikes for the upper section, but crossing the soft snow on the Sloan Glacier, I could tell it was not looking good for a summit bid. Ice and snow fell off the summit block every few minutes, and it was HOT.

Once we made it to the corkscrew, Tyler and I stashed our snowshoes and began to traverse. Within 5 minutes, I already was having bad feelings, as both Tyler and I noticed fanning and sluffing of the warming snowpack shearing off as we postholed up to our knees.

Turning around is never easy…we were SO CLOSE, just 300′ from the summit. It was a no-brainer decision, though. The snowpack was warming and appearingly unstable, we were in trail runners, and it was such a good day, no reason to ruin it. We turned back to where we had stashed our snowshoes just below the “corkscrew” and began the slushy ride back down the mountain.

Headed down the mountain on snowshoes, I was QUICKLY reminded how much I love skiing! It was such a spectacular day though, and I kept my head up for the views, rather than down looking at the sloppy snow. Returning on our tracks was machine-like, one foot in front of the other until we got back down to the N Fork Sauk River, for yet another coooooooold crossing.

Once back on the road, we began our run again. We hoofed it back down to the car, with 8:20/mile splits. We are no racing machines, but this felt fast to us with the goofy packs we were wearing and almost 6,000′ ascent on our legs. Finally, we turned a corner and THERE IT WAS! The beautiful HOTELement. Oh…were we ready for dinner!

Sloan is an impressive peak and a true Cascadian adventure. The climber’s trail from the N side is easy to follow and would make for a fun summer run/climb. In the spring, though, be prepared for snow and sloppy conditions towards the summit. The summit block was not really “protectable” in terms of snow, so be prepared to solo it. Nothing scary…just steep snow. Consider your timing to avoid warming and unstable snow like we found.