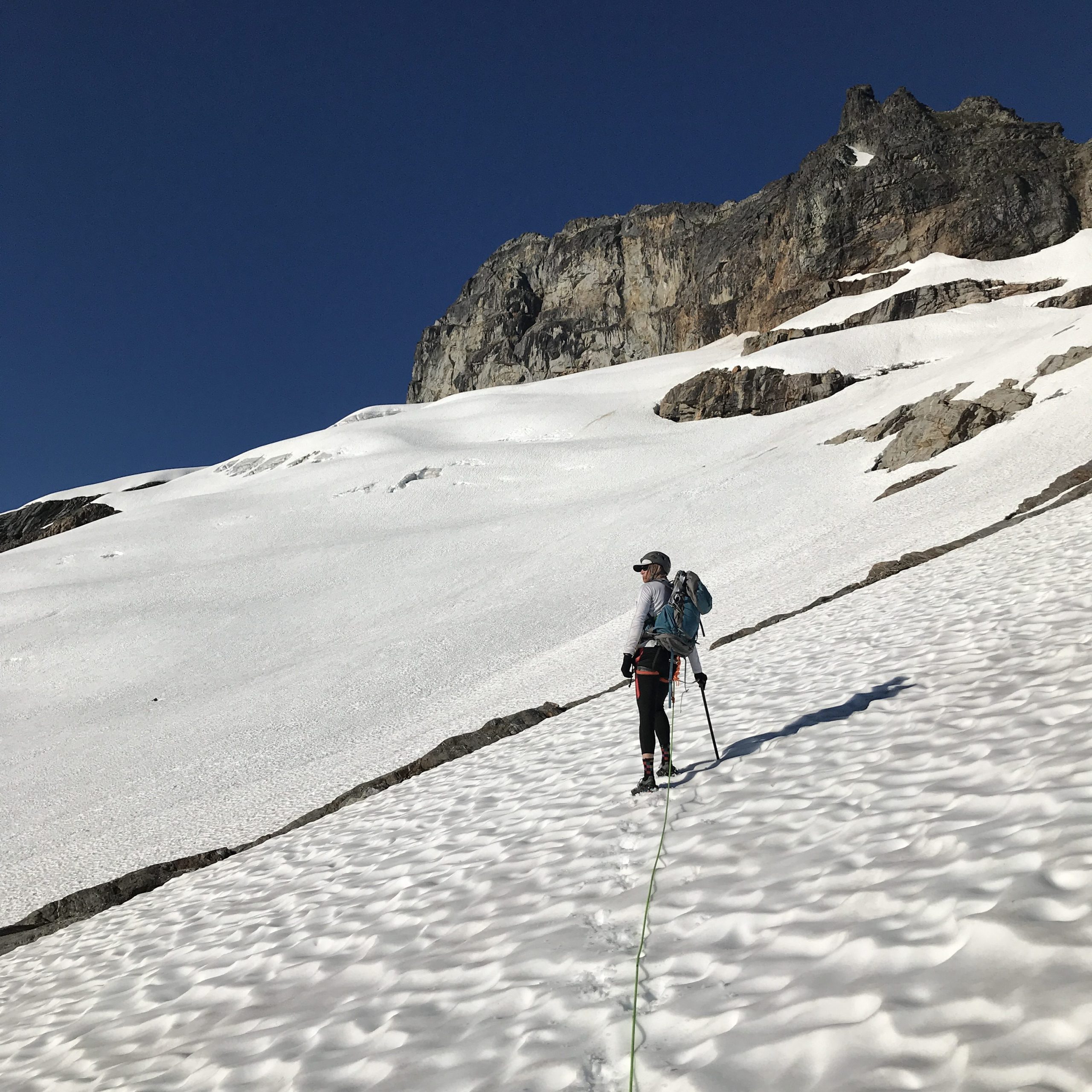 Tyler and I had made an attempt on Sloan earlier in the year, a little TOO early. There was snow pretty much the whole way and we ended up turning around at the “corkscrew” due to unstable snow conditions. It was a fun outing…but we had to come back to complete our unfinished business.

When I flew back to Seattle after my stint at home, recovering from injury, Tyler and I hatched a plan to spend a few days in the mountains. We decided on Mt. Baker and Sloan, and gave ourselves Monday through Wednesday for the two trips.

Tyler and I got off of Mt. Baker early in the day on Tuesday, and sitting in the car we discussed whether we wanted to do Sloan in a single-push with no overnight gear, like we had done last time, or if we wanted to get in some miles in the late afternoon/early evening and split up the trip. Here’s the synopsis of what we were thinking:

We decided to try and aim for the basin around 3,500′ next to Cougar Creek. It would break up the climb into two smaller parts so that we wouldn’t have to wake up as early or end as late the next day. Tyler was planning to work the day after, so he wanted to be back home at a reasonable hour. I was also planning to start my road trip out towards Wyoming and Montana the next day, so I would appreciate the extra time to prepare.

Crossing the North Fork Sauk was a bit of a maze last time Tyler and I tried Sloan, but this time it was a little faster…well, at least on the way up the mountain (foreshadowing for the return journey). We followed the trail from the road to the river and this time we knew to head upstream to where numerous downed trees and logs created a logjam that we could crawl across.

The river crossing wasn’t horrible, it was just a bit slow. I took off my shoes, determined to keep dry feet, and waded through the low water once past the logjam. Once we crossed the larger North Fork Sauk, crossing Cougar Creek was much easier. We sighted three vertical sticks in a sandy bank along the river and figured that MUST have been made by another human. After a few minutes of winding along a footpath it brought us to the trail, marked by flagging tape. SWEET! From here on up Tyler and I knew the route well, having just done it a few months prior. The trail is easy to follow all the way up to the basin around 3,500′ that we were aiming for, and we cruised through the evening miles and elevation.

Around 7 PM we reached the basin around 3,500′ near Cougar Creek and found a good camp spot…we looked at each other and debated if we wanted to continue hiking up? There was a higher basin, around 5,000′ at the head of Cougar Creek, that seemed it would be next logical spot if we were to continue up. We remembered back to our trip on Snowking, though, where we bivied on the trail, and decided to stay put. We had accomplished our goal of getting in some evening miles to make the next day shorter…that was good enough. We filled up our water bottles, pitched the tent, and knocked out for the night. Ahhh…I love sleeping outdoors. So many hours to catch up on sleep!

For a moment or two, we were confused, looking around for where the trail would poke out and continue to lead us up towards the Sloan Glacier. Looking left…looking right…still nowhere. We found a series of cairns but they seemed to dead end, not leading to any definitive path.

I managed to find a faint path into brush heading along the side of one of the waterfalls, but after pulling on branches for around 300 feet Tyler and I agreed this was not the way. It did, however, “go”, and we managed to shwack our way up through the brush and onto the next “tier” where we were able to pick the trail back up.

Ah hah! Once we picked up the trail we could see where it was coming from…a sharp turn to climber’s left in the creek bed that was hard to spot. Silly us…we continued along the trail, now gaining the ridgeline up towards the Sloan Glacier.

Once we reached the toe of the Sloan Glacier, we each threw on our harnesses, grabbed the rope, and put on either microspikes or crampons. I had brought microspikes, and looking at the traverse over towards the Corskcrew I was a bit bummed I hadn’t brought my strap-on crampons. Tyler volunteered to kick steps for me, the morning snow firm and my microspikes not inspiring too much confidence in my steps. The glacier was in great shape, with no major crevasses to report along the route. There was a faint track laid by some other climbers, seemingly a day or two beforehand. Today we were the only ones on the mountain, and it was perfect.

We traversed across the Sloan Glacier to the base of the summit block, where the “corkscrew” winds it way circuitously towards the summit. We stashed our crampons, the rope, our helmets, ice axes, and packs, and headed up to the top with a jacket and some food. The footpath was surprisingly excellent…there were only a few sections of garbage choss or scrambling. Lovely!

SUMMIT! Barely windy and with perfectly clear skies, Tyler and I enjoyed the summit, munching on salami and signing the summit register. A great return trip to an objective that still tugged at both of us.

Back down we went, cruising back down to our camp to retrieve our overnight gear and head out…until we hit the North Fork Sauk again. We LITERALLY got lost in circles…repeating our steps at least three times. We went up the river, failed to find a place to cross, thought we had found the way, only to recognize a log we had already crossed and laugh at ourselves for getting lost again. Ahh…Cascadian adventures!