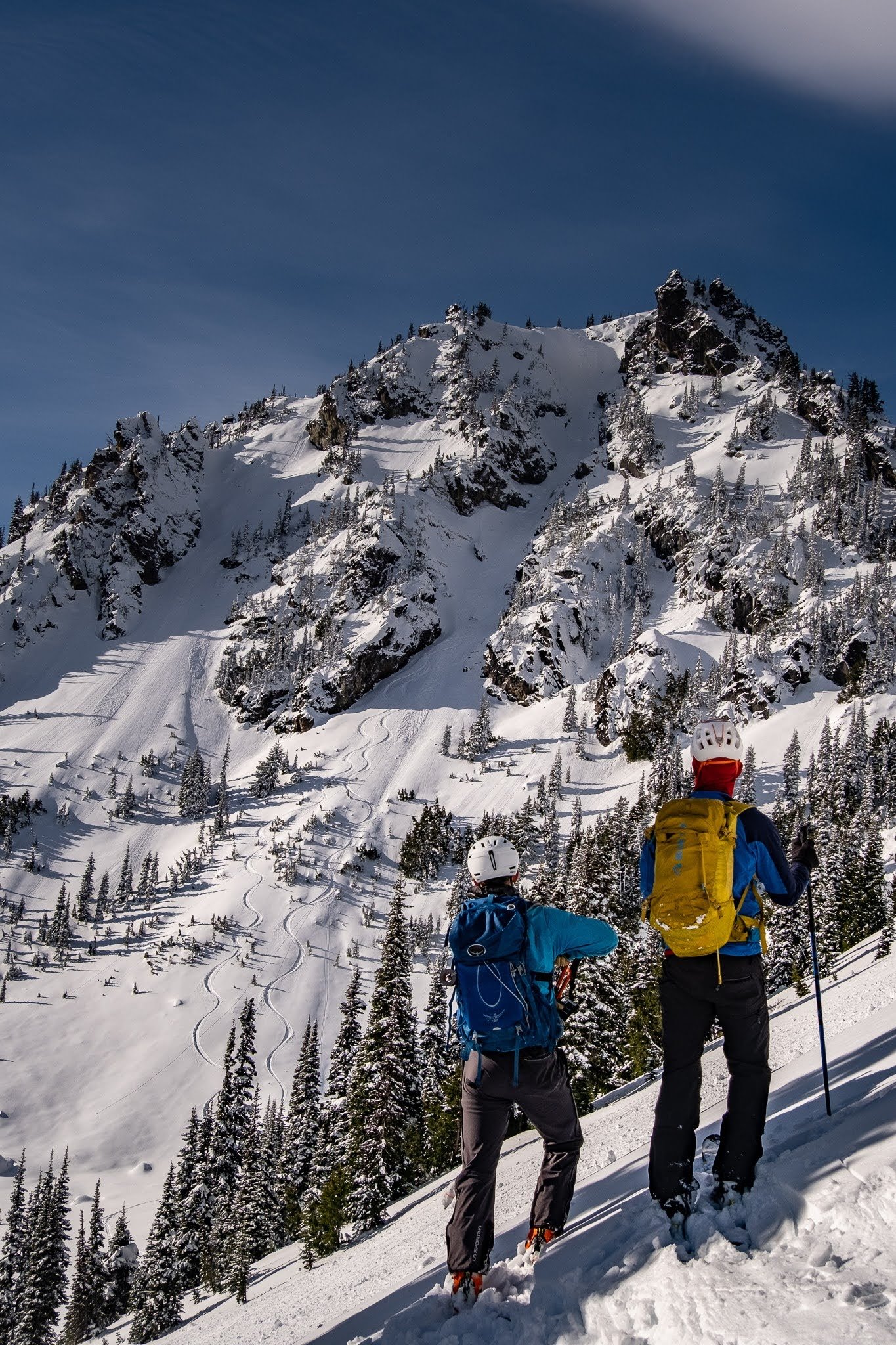 A high pressure ridge was aloft over Washington for Thanksgiving weekend and early-season coverage was SO good! Kyle, Zach, and I had skied Tye Peak the day before and planned to meet up with Dan and Madelynn at Crystal for the Sheep Lake Couloir. The day was forecast to be clear and sunny; the forecast was so hot that wet, loose problems were expected…in November!

The Sheep Lake Couloir is a steep 1,300′ couloir dropping off the NE face of Chinook Peak towards Sheep Lake. The line is aesthetic…a gash down the prominent face that begs to be skied. It requires stable conditions, as any couloir does…with light winds the previous two days and only light snowfall in the area, the forecast lined up well to give it a go.

We met up at Crystal Mountain at 8 AM; Dan and Zach had to get their uphill travel cards from the Guest Services window so that we could skin up through the resort towards the Southback area. Once Dan and Zach got their cards we began skinning up the resort; with the lifts not yet turning, we were the only ones on the slopes. Skinning up the corduroy felt a bit weird, but made for fast skinning. Ski Patrol stopped us to check our cards halfway up the slopes; make sure to follow the rules!

Our uptrack followed the groomed ski trails all the way up to the top of the Quicksilver Lift, where we continued up towards Threeway Peak. There were skin tracks from other skiers to follow as we continued up past the groomed slopes of the resort, and ultimately we were aiming for the eastern saddle near Threeway Peak. The morning was cool in the shade but warm in the sun…and it was only going to get hotter. Not a cloud in the sky and the sun above…it felt more like May than November!

From the eastern col on Threeway Peak we dropped down into the Morse Creek basin, ultimately on our way towards Sourdough Gap. The southern slopes off of Threeway Peak were heavy and sun affected…the turns were through thick, wet snow but still good!

Once we were down in the Morse Creek basin we transitioned and continued on up towards Sourdough Gap. From there we would ski down to Sheep Lake, where we would be staring our objective straight in the face.

Once again, we transitioned at Sourdough Gap and skied down towards Sheep Lake. WHAM! There it was….the Sheep Lake Couloir in its full glory.

The couloir is striking, starting off narrow and opening up onto an apron below with mellow slopes. Sadly we could see there were already tracks in the couloir…someone had beat us to it! The tracks looked from the day before, so it was not like we were too slow getting out in the morning.

Dan led the way to approach the couloir, around the south end of Chinook Peak to approach from the more mellow southwest slopes.

The southern aspects of Chinook Peak were ROASTED! On a few occasions the group had to stop to apply skin wax to reduce globbing. We were not thrilled with the pinwheeling we were seeing on the slopes we were skinning, but we moved as fast as we could through the terrain.

Once on the southwest shoulder of Chinook, Rainier stared us down…WOW!

The skinning on the southwest shoulder was low-angle and pleasant, and led us directly up to the entrance to the couloir. The top of the couloir had two entrances: one directly from the summit to skier’s left, that looked rocky in early-season, and one more towards skier’s right, lower along the ridge that we chose. I dropped in first to grab pictures of the rest. With my radio on, I chose to stop halfway down the couloir, still within sight of the rest, on a bench out of direct “line of fire” from the slide path of the couloir.

Kyle dropped in next…the snow was variable but still quite good, though thick in places.

The couloir was wide…maybe 30 feet or so, such that jump turns were not necessary. Sluff management was the key, allowing the snow to slide past you before turning back into its slide path. Kyle leap-frogged past me down the couloir to take photos of the second half of the run.

By the time I skied down to the rest of the group the couloir was pretty well tracked out and the snow was chunder…my turns were sloppy, to say the least. Further down towards the apron, though, the snow got better and I began to hoot and holler again with excitement.

We took a nice lunch break at the bottom of the couloir, happy with our work for the day. After a sandwich or two, we skinned back up to Sourdough Gap and skied the north facing bowl down to Morse Creek. Kyle got some airtime while I snapped his picture…

We took a skin track up towards a col above Crystal Lakes basin and skied down to the lake for one last run of the day. The low-angle turns were just pure fun.

The fading light over the lake was wonderful…so pleasant.

We skinned our way back up towards Threeway Peak and skied back down through the resort to the parking lot. Overall, a great day with pretty good snow but AMAZING people!