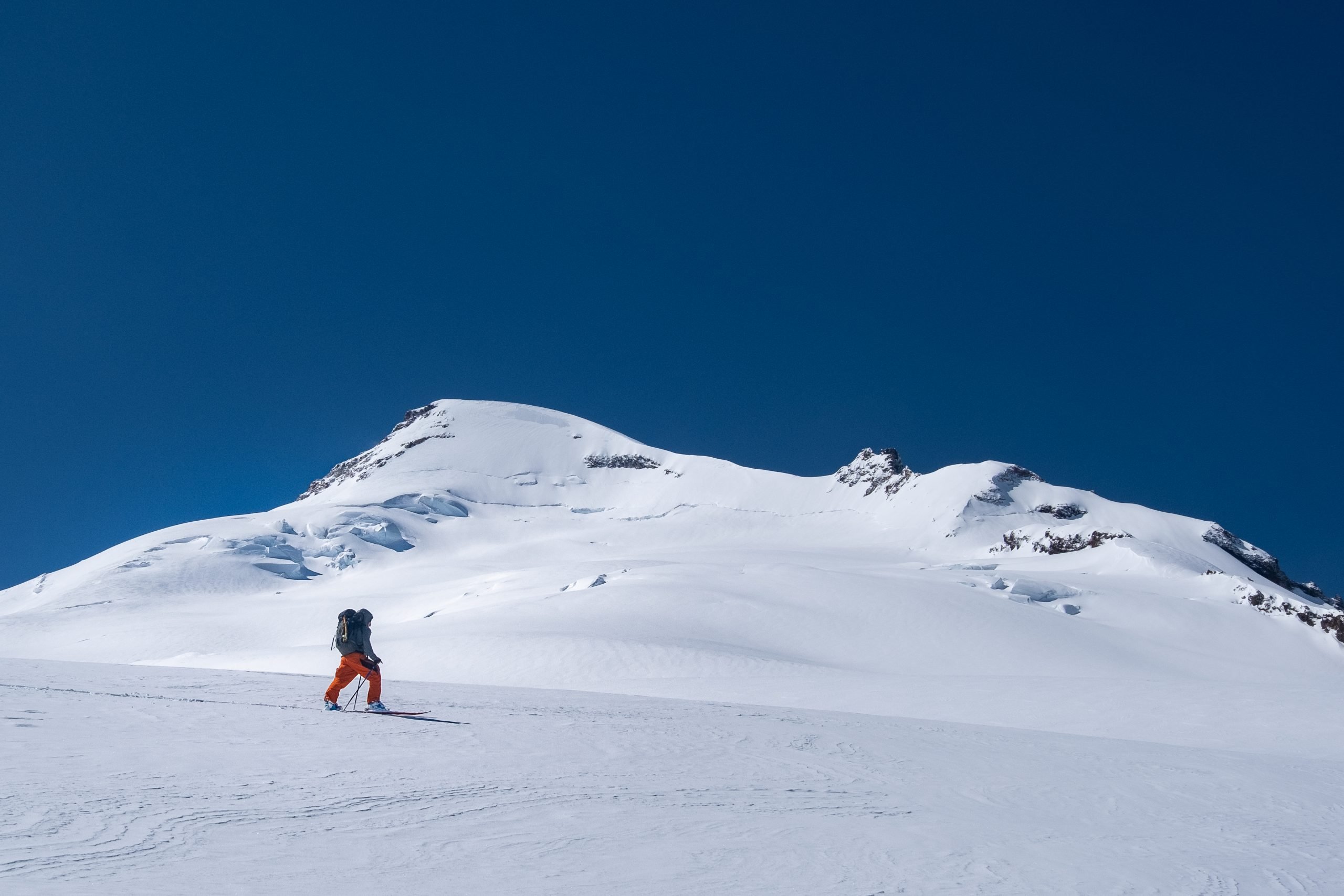 An early April storm had brought 10-12″ of new, cold powder to the region. Jon and I toured around the Baker backcountry on Saturday, but with high pressure slated for Sunday we wanted to do a bigger adventure, more exploratory. We tossed around a few ideas with Chris and Dan and settled on trying the Watson Traverse in reverse; the route is typically done by ascending the Coleman-Deming route (C-D) and then skiing down the Park Glacier to the Baker ski area, but we felt the route would be better done in the other direction. By starting from Heather Meadows and going up the Park, you could theoretically ski continuously down to the car parked on the Heliotrope road.

The storm on Friday had brought high winds and new snow, which made us alert for wind slabs. Jon and I did notice some wind affect on our Saturday tour, but not widespread propagation or large activity…mostly just surface sloughing. We discussed our plan for the day, and everyone agreed that we could travel in relatively safe terrain up until the Park Glacier Headwall, where we would have to gain either the headwall itself or the Cockscomb ridge. This was our primary area of concern for the day, and everyone clearly expressed a willingness to turn around, if need be.

We met Chris and Dan at their car on the Heliotrope road about 4.5 miles up from Highway 542 at around 4:30 AM. We left their car and shuttled up to the Heather Meadows lot, where we aimed to start at 5 AM. We were about 30 minutes delayed, but got started just before 5:30 AM. I had a minor boot malfunction, but nothing that couldn’t be solved with a little bailing wire!

The morning sun rose above the North Cascades as we began breaking trail out Ptarmigan Ridge. The glow was amazing over the fresh skin track.

We could tell the trail breaking was going to be slow for the day. The powder was boot top even with skis on. We continued out Ptarmigan Ridge, transitioning once or twice but for the most part keeping skins on. Fortunately, the morning was cold, keeping the snow dry and not globby.

The trudge out to the Park Glacier was long, but at points we got stunning views of Baker, as well as what lay ahead. We could see there was a large bergschrund at the top of the glacier just below the headwall, but there appeared to be a few spots to cross. A problem for a later us…

We continued on for what felt like an eternity. As I said, the trailbreaking was SLOW…putting us behind schedule. We had hoped to reach the summit, or at least near it, in around 7 hours, but as 8 hours ticked away we were still climbing the glacier.

As we neared the bergschrund we got socked in by a cloud that shrouded the upper mountain. We waited for approximately 20 minutes before deciding to turn around due to low visibility and objective hazard of crossing the bergschrund in a whiteout. It was heartbreaking to have to turn around so close, and to have to exit out the way we had come, which was much more time intensive than the ski out the Coleman-Deming route. However, in hindsight we all agreed it was the right call given the deteriorating conditions.

The ski down the Park Glacier was hero powder of around 10-11 inches…cold and dry. AMAZING! Definitely one of the best ski descents I have had this year. Thousands of feet of continuous fall line skiing. Couldn’t ask for much more.

It took us around 3.5 hours to get back out, but we made it back to the Heather Meadows parking lot by 630 PM. Overall, it was a 13 hour day with about 24 miles total and 9,300′ gain. And lots and lots of trail breaking.