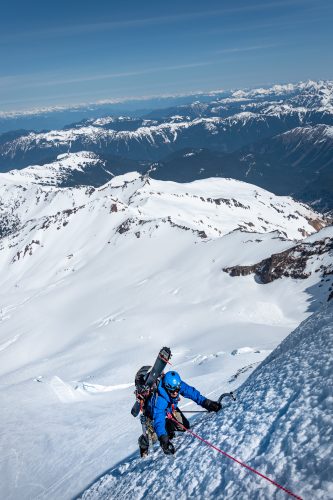 Each year, I put together a list of trips I wish to go on during the various seasons. As an engineer, spreadsheets are my way of organizing myself. In February, Chris, Dan, and I skied the Worm Flows together on Mt. St. Helens, and we had chatted about climbing the North Ridge of Baker later in the year, sometime in May or June we hoped. Well…with a beautiful weekend of high pressure, we decided to give it a go!

The route combines basic snow travel, glacier travel, steep snow travel, and one short section of low-angle ice travel; simply put, you need to have a mixed bag of skills. In many guide books, the route is graded at AI2 or WI2 for the short section of ice required to get onto the large serac on the ridge proper; as with many alpine routes, the difficulty varies greatly with conditions.

To prepare for the trip (for a team of 3), along with other items:

Our packs were certainly heavy on the way up. Fortunately we did not have to walk very much of the road. Chris and Dan stashed their trail runners only a mile or so from the car, around milepost 7; I decided to keep mine for camp.

We opted to split up the climb across 2 days: the first day approaching Camp Coleman, at 6,800′ just above the Coleman Glacier, the second day leaving camp early for the North Ridge. Many do the North Ridge in a day, leaving early from the road; with warm temperatures for the weekend, and with clear skies in the forecast, we were concerned about the upper parts of the ridge getting sun, so we wanted to give ourselves as much time as possible.

We were JUST in time…the snow levels were melting out fast. We had to take off our skis twice to cross over creeks where snow bridges had melted out. Aside from those minor inconveniences, the Grouse Creek approach was a breeze, following low angle slopes up towards the Coleman Glacier.

There were quite a few groups on the skin track up Grouse Creek. With the warm weather, the Baker backcountry was a prime spot to be…

The snow was soft, wet, and HOT…PHEW were we sweating. Not a cloud in the sky as the sun beat down on us. Once we got onto the Heliotrope Ridge, we got a great view of the North Ridge, our route for tomorrow.

As we gained the Coleman Glacier, we could spot the base camp down where many parties had set up their camps.

My it was a gorgeous day! We rolled into camp and found a nicely dug out platform all ready for us! How nice! We set up our shelter for the night and basked in the sun. I set up a clothesline across my skis with a runner to dry out my skins and sunbathed for hours. Packing overnight gear made our packs heavy, but the lounging around on the Coleman Glacier was a blast!

As the sun failed to set (haha…gotta love long Cascade days) we discussed our plan for the next day. We set alarms for 1 AM, with plans of moving by 2 AM. We would try to be at the serac, the ice portion of the route, by 9 AM, which would put us at the summit by late morning/early afternoon.

As we failed to sleep, with the late night sun beating down, we heard a helicopter hovering above. Turns out, a skier had injured their ACL skiing down the Coleman-Deming route hours earlier, and a rescue was in progress. We watched from our sleeping bags, sad to see the situation unfolding but guiltily entertained.

Early enough, our alarms rang and we were up. I was STOKED for an awesome day…the morning was clear, barely a breeze. The sky was cloudless and the moon still lit the sky. Chris made some morning coffee for us, and we strapped on harnesses before leaving camp. We packed our climbing kit, as well as emergency provisions of a stove, emergency bivy, and sleeping pad.

Route finding to the base of the route seemed easy the day before; looking out across the Coleman Glacier, we could see a series of crevasse fields, but there appeared to be an easy route through them. Turns out, it’s much harder when it’s dark out. We skated down a few hundred vertical feet to where the Coleman Glacier flattened out below our camp; from there, we began to gradually climb up towards the large slide path beneath the North Ridge. On a few occasions, we had to cross snow-bridged crevasses. Roped up, and one-by-one, I led the way, with Chris and Dan holding me tight. Later in the season, these cracks would open up much larger, making the approach to the route an absolute maze.

We removed our skis once we began crevasse crossing, which led to some agonizing postholing. The crust layer was just soft enough for our boots to punch through. It was a “russian roulette”, as Chris put it, whether you were going to sink in or not. We alternated trail-breaking until we hit an old avalanche debris path, which was firm and provided good purchase. PHEW! No more postholing…for now.

From the debris path, we sighted the ridge. There were many ways to gain the ridge:

We could see a faint bootpack on the snow ramp on the western flank; with the sun rising soon, and knowing that timing was key to avoid warming later in the day, we opted for the bootpack and began off towards the ridge. The bootpack appeared recent, maybe a day or so old, and was amazing to follow after hours of postholing. The snow ramp was low-angle; with two axes in hand with self-arrest grip, we easily navigated our way to the ridge.

On the ridge, we began to hear some voices…we had seen headlamps earlier in the morning, but they had faded once we began crossing the crevasses. Turns out, THEY WERE BACK! We met Ryan and Stan, who had left from the Hogsback Camp farther down on the Coleman Glacier on snowshoes. They had stayed lower down on the glacier and avoided the crevasse crossings altogether. Oh well… They had gained the ridge lower down and now met up with us a few hundred feet below the serac, the “crux” of the route. We chatted briefly, as both groups woofed down a snack and some water, and Ryan and Stan headed up just ahead of us towards the serac.

Gaining the serac is the crux of the route; depending on conditions, there are multiple ways to gain the serac. Once on top of the serac, the route mellows out significantly, becoming a simple snow ridge all the way to Grant Peak. On the day we climbed, the nose looked steep and stout ice climbing; a small traverse to climber’s right seemed much mellower and safer.

Up to the traverse, the snow was beautiful neve, which made for easy booting, along with Ryan and Stan going first (haha). Around 50 meters below the serac, the snow firmed up to a rimey mixture, and we began to move slower. I placed a picket around 30 meters from the serac and dropped down a rope for added security to Dan and Chris on a running belay. Above us, Ryan and Stan prepared to traverse across the short ice step to gain the serac.

We waited for Ryan and Stan to clear the traverse onto the serac, then Chris led the way. Chris placed six screws on the traverse, using a picket and a screw for our belay anchor and two screws (one borrowed from Ryan and Stan) for the anchor on top of the serac.

The ice was FIRM; with skis on our backs, the traverse took concentration and deliberate movement. Chris did a great job of leading the way, and belayed Dan and I up onto the serac. Chris set up the traverse with two double ropes; I climbed first as he belayed from the top, then Dan followed and cleaned the screws and picket. Once we crested the serac, we got a healthy dose of sun, exactly what Dan and I needed! We had been waiting in the cold shade of the serac for nearly an hour and a half as Chris, Ryan, and Stan went before us. We were cold, to say the least.

Once on the serac, we decided to stay roped up for one more 30 meter section of firm snow/rime. Chris again led the way, placing 3 screws and a picket to a point where he could belay Dan and I up and we could remove the ropes. Ryan and Stan had set a good bootpack, and the route turned back to good snow.

Finally, we had made it to the summit plateau! PHEW… The sun was out and BEAUTIFUL. We transitioned to skins quickly, skinned over and tagged the summit, and began to ski down the Coleman-Deming route back to camp. We wanted to get off the sun-baked slopes as fast as we could. We reached the summit at 2 PM, around 11.5 hours after starting in the morning. Could we have been faster…absolutely. With some more careful route finding through the Coleman Glacier in the morning, and a few less stops, we could have been quicker. But we were glad we had managed the route carefully and safely and had taken ample protective measures.

The snow down the Coleman-Deming was great corn but pretty tracked out from dozens of skiers who had skied it over the course of the weekend. Still plenty of turns to be had though!

Back at camp, we quickly packed up our things and began the ski back down Grouse Creek, which was now fully “mashed potatoes”, a soup of snowy mush.

We were able to ski all the way back down to mile post 7, where Chris and Dan had stashed their shoes, and walked the remaining 0.5 miles back to the car. Mission accomplished! A great weekend on a great route!