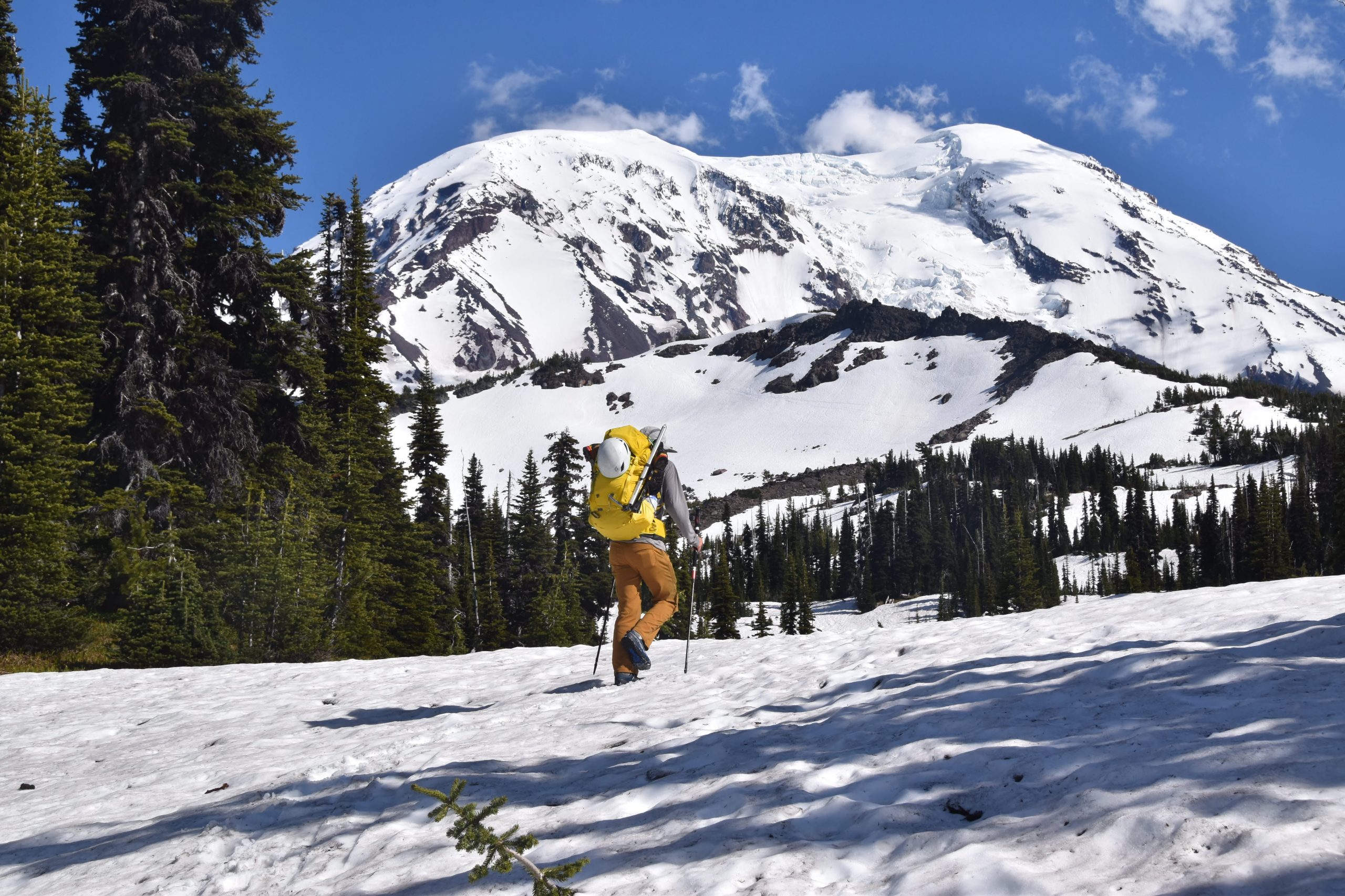 In the summer of 2019, by buddy Hans Webster and I road-tripped from Portland, OR to Seattle, WA, climbing volcanoes along the way. This was the second in the trip.

Early June, 2019…Hans and I had just climbed Hood the day before and were on to our next objective: Mt. Adams (Pahto). We had chosen to climb the North Ridge, wanting some more “privacy” as compared to the South Route, which we had read was quite crowded.

Being early season, there was still lots of snow on the trail, and just before the PCT the snow became consistent for most of the terrain. The snow was mushy and easy to travel across, even in our trail runners.

We found a grassy patch at the High Camp that made for an awesome camp spot…and the weather was perfect. Dang this mountain is nice!

We hung out the rest of the day, eating, goofing around, and just enjoying the views. Barely any clouds in the sky…a perfect bluebird afternoon.

The view out of our tent was pretty sweet too.

Hans had just graduated from Georgia Tech with a B.S. in Mechanical Engineering, so we HAD to take some pics with the flag.

We went to sleep early to prepare for our alpine start. We began in the dark around 3 AM, making our way to the North Ridge (a.k.a. North Cleaver). In terms of gear, we climbed in trail runners and had micropsikes and ice axes. We opted to forego a rope, as there were no crevasses along the ridge, which leads to the summit plateau.

Overall, the route is very straightforward. There is A LOT of choss climbing, loose gravel, and scrambling. But none of it is technical climbing.

We reached the cleaver just as the sun began to rise around 5 AM or so. The morning glow was amazing.

The biggest “crux” of the North Ridge is honestly just the rockfall. Be careful about climbing below your partner in case they kick down rocks on you.

We had packed mountaineering boots in our backpacks, and transitioned into them from our trail runners along the ridge once we got past the rocks and transitioned to snow. I’d say this isn’t totally necessary, if you are comfortable with microspikes on steep snow. Otherwise they are a nice security to have.

Without much thought, we followed the ridge to the summit plateau and meandered our way over to the true summit. On top, we snapped some pictures and looked over at our next objective: Mt. Rainier.