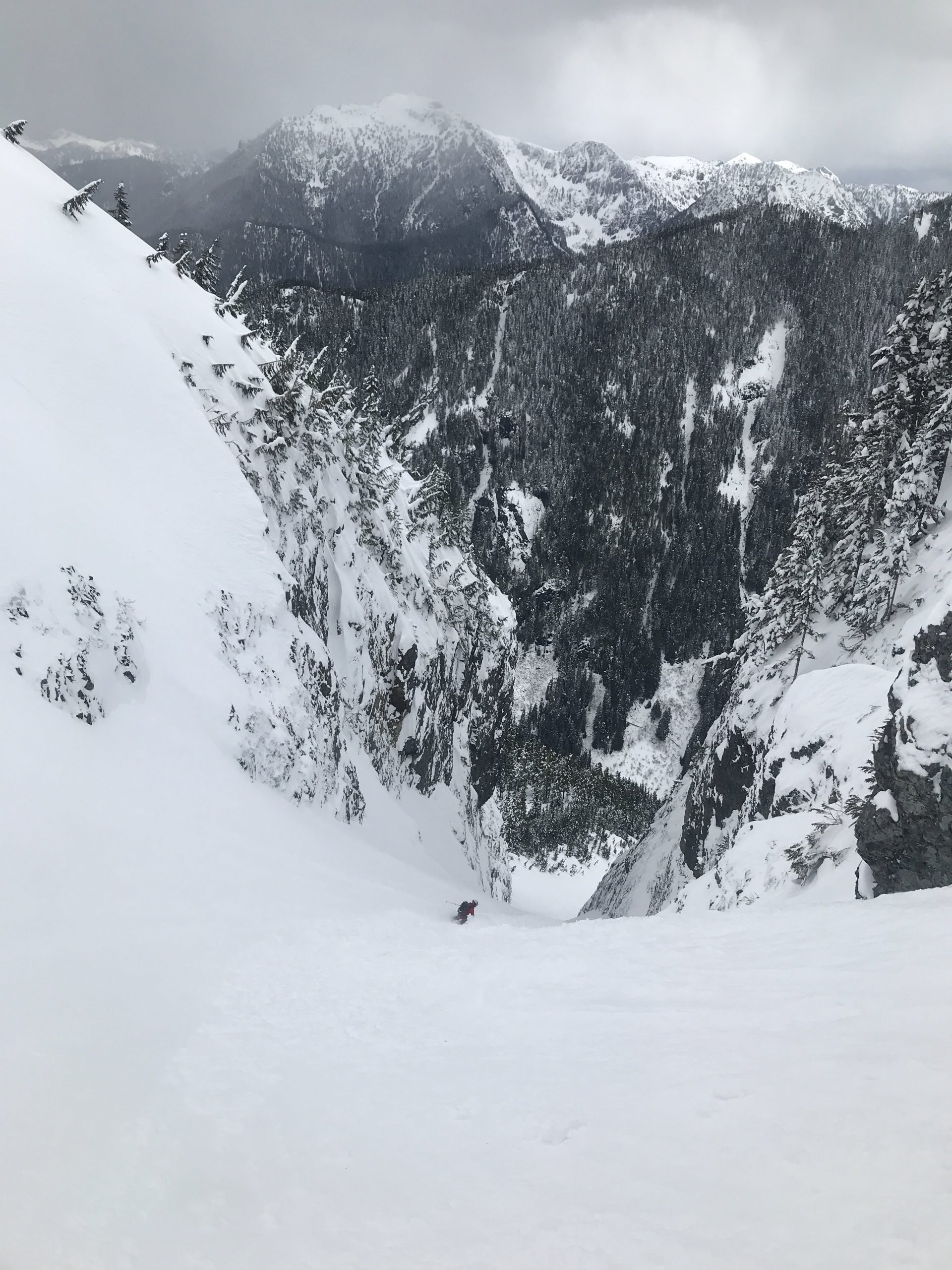 My friend Nick has an ongoing project of skiing couloirs across Washington State; Mt. Thompson’s north couloir had evaded him a time before, so we went back to try it again. Snoqualmie Pass had received feet of light, stable snow with relatively low winds, so we were optimistic about the snow conditions. The day before I had skied the Crooked Couloir off Snoqualmie Mountain, and unfortunately had seen that the sun came out and cooked south and west facing slopes. We knew that travel out towards Thompson would involve some bad skiing through crusts.

Anthony had proposed a car shuttle down at the Middle Fork to avoid all the bad skiing on the way back from the couloir. It would involve a rough road with high clearance, some road walking, and some ‘shwacking. The thought of not having to skin back through garbage snow was enticing!

The car shuttle would have been quite long, but in the morning Anthony had some soreness in his hip and pulled out to stay at home and rest. He volunteered to be on standby for us, though, and drive up the Middle Fork to pick us up at the Dingford Trailhead, should we so choose. We kept the idea in our back pockets, threw trail runners in the trunk of the car, and headed up to the pass.

So much for the trail runners…Nick and I immediately agreed that we’d leave them in the car and lean towards skinning back. We said that if it was REALLY bad we’d just hike in our ski boots.

We skinned up the Commonwealth towards the Kendall Katwalk, bypassing it just slightly on the NE side of the ridgeline. We had to boot up a short section that was steep and shallow snow over rock slabs, but it overall was pretty cruiser travel; we took about 2 hours to get to that point.

From the Katwalk, we traversed high above the PCT towards Gravel Lake, were we got a short ski descent on north facing snow. It was still dry! We skinned and then booted up the SW facing slope above Gravel Lake to enter Bumblebee Basin, just below the south slopes of Mt. Thompson. For how far it seems, it’s quite fast to get out there!

Before long, we were at the top of the couloir. The entrance is a large NW facing fan that is very exposed to wind effect; I put Nick on belay and he poked into the couloir to test the surface. We found some shallow slabs that were a bit reactive but nothing deep. We still felt a bit concerned, but comfortable enough to continue down the couloir towards the main gut of the line. We could tell the snow down lower was less wind affected, so it was just a matter of getting down to it safely.

Nick went first, hopping kick turns to where the couloir takes a slight dogleg to the right. He kicked off a small 3 inch slab but nothing deeper. I followed down to him, trying to stay within his track as much as possible.

The snow definitely turned for the better once we were down in more sheltered terrain. The rock walls of the couloir were striking!

The snow just got better and better! Even skiing the slough was great.

We were able to ski more aggressively once we were past the upper couloir and down towards the fan. We could see the Burnt Boot drainage and the Lemah group above us on the horizon.

After a great descent down to 3,800′, we transitioned to skins to head back up to Edds Lake and then return the way we had came. SIKE…after skinning for 2 minutes I convinced Nick to try the Middle Fork exit. I’ll be honest here…I was tired and didn’t really want to climb and ski more garbage snow. The idea of bushwhacking and walking in ski boots, for the first time ever, seemed more appealing than skinning and skiing. Nick begrudgingly said yes to my heinous idea and we texted Anthony to meet us at Dingford TH…we were on our way.

The bushwhack wasn’t great, I’ll admit it…there were definitely some vertical alder belays. I found the Middle Fork exit quite peaceful, though, with the river and the HUGE old growth trees.

My apology to Nick: At the end of the bushwhack out Burnt Boot Creek, Nick and I got separated. Nick had been ahead of me for most of the ‘shwack out and I thought he was still ahead of me as we entered Goldmeyer Hot Springs. I knew we had at least 6 miles of road walking left to do, so I continued on without a thought. This was NOT OKAY. Nick had stopped at the hot spring to wait for me and I missed him. As I continued to walk, we got further and further separated. I passed two parties and asked them if they had seen Nick. They said no. After I talked to the first party, I just thought that maybe Nick had passed them while they were down at the river or something. After the second party, I started to realize that Nick was either behind me or on the other side of the river on the Middle Fork trail.

At this point I realized I needed to stop; I continued on for about 5 minutes to find a good spot to sit down. After 5 minutes Nick showed and he was rightfully pissed. I was very angry at myself for being so stupid; I felt I had put a damper on the mood of the day, which had other wise been very successful. We continued hiking on until we met up with Anthony and then hiked on to the Dingford TH.