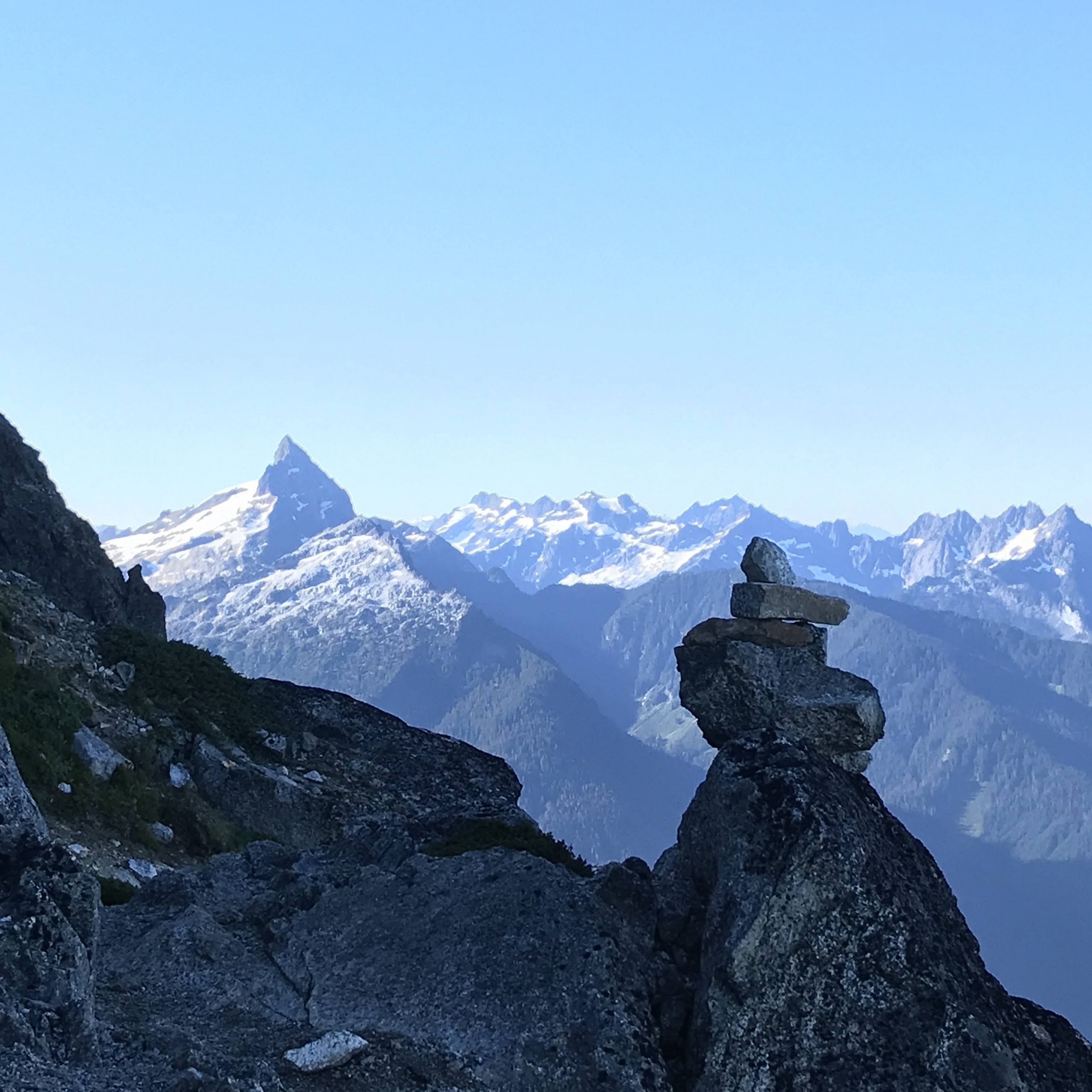 Earlier this year in May, my friend Tyler and I tried to “run” Mt. Pugh with snowshoes. As you can probably guess, it did not end well…we made it to Stujack Pass and barely onto the ridge, before realizing that we were still a long ways off from the summit, with hip deep snow to wallow through. We turned around and ended up settling for a good fitness/training day.

School had just started back up and I was looking for a solid half-day trip that I could fit into the morning, which would allow me time to do schoolwork in the afternoon. A revenge tour on Mt. Pugh! Perfect. At 12 miles roundtrip, with just over 5,300′ gain, I figured I could squeeze in Pugh in around 5 hours or so, being home around lunchtime.

I slept in the back of my car at the trailhead and planned to wake up and start around 6 AM, right after sunrise. I woke just before 6, hearing hikers begin to file into the trailhead. WOW…more trafficked than I thought. Last time I was here there was barely anyone…but, after thinking for a second, I was last here in May, when nobody except Tyler and I would be dumb enough to climb Pugh.

I quickly scarfed down an English muffin with a smear of peanut butter and began loading up my Black Diamond Distance 15 running pack. I packed a mini first aid kit, my Garmin inReach, a puffy, some snacks, 500 mL of water, sunglasses, and my Black Diamond Distance Z-poles. I was planning to be out for less than 6 hours, but I always pack first aid supplies whenever I go into the mountains.

I locked up the car and began hiking up the trail. In my head, I was hoping to be under 6 hours round-trip…the stats were 12 miles, 5,300′ total. After doing 7,000′ vert the day before out near Eldorado, my legs were a bit stiff, so I took the first few miles for a warm-up, power hiking up towards Lake Metan.

The past 3 months have been about rebuilding fitness for me, after injuring myself in late May, and I was content with power hiking up Pugh and running down. I need to build back my uphill fitness, especially my running power. Pugh was a perfect opportunity to build some leg strength.

I made Lake Metan in around 40 minutes and continued hiking up towards Stujack Pass. The trail was soft, straightforward, and honestly, lovely. I passed three hikers on my way up, but once past them I was all alone…the mountain to myself.

It was amazing how easy the route was without snow…lol. The switchbacks up to Stujack Pass were SOO much better than postholing with snowshoes. I made quick time of the switchbacks, reaching Stujack Pass and turning right towards the ridge. The whole way, the trail was easy to follow and well kept.

I crested a notch along the ridge and got my first sight of Pugh’s summit, a sight I had just a few months prior but so different this time…SNOW FREE! Wow…I should have just waited. I kept on along the ridge, power hiking and keeping on pace for sub-3 hours to the summit.

There was only one tricky section along the ridge, one where I missed a cairn and had to climb up and to climber’s right along the ridge to regain the trail, which had ducked onto the south side of the ridge. On my way down, I clearly saw the cairn, but on the way up it was easy to miss.

Pugh is rated as a “Class 3” scramble, but to be honest it’s Class 2. There are only a few sections where I used my hands to either butt slide or grab a rock for some security. The route is well marked, cairned the entire way, and overall, an absolute blast.

Along the ridge I picked my head up to get amazing views of Sloan, White Chuck, Whitehorse, and the entire Cascade range, really. I could see Baker to the north, Rainier to the south…ahhh, good to be back where I belong.

Before I knew it, I was walking up the final steps to the summit when I saw…a tent!?!? Someone was camping at the summit, and I quickly saw numerous bivy sites at the top. WOW…that would be a beautiful sunrise! I looked at my watch…2 hours, 45 minutes to the top. Nice…slow but not horribly slow. I quickly scarfed down a peanut butter English muffin I had packed and began back down, knowing I could easily beat 6 hours now, hoping for sub-5.

I wasn’t able to start running for about a mile below the summit…the trail was rocky and a little too steep for me to feel comfortable beginning a trot. Instead, I walked quickly, recreating my upward movements in reverse. I easily found the spot along the ridge where I got “lost” for a moment, kicking myself for how obvious it was. Once I was back on the trail along the ridge I began my trot.

On my way down I was surprised how many hikers there were! I passed at least 25 hikers throughout my descent…guess they started just a bit later. I found a good rhythm on the way down, and started to really cruise once I got down off the switchbacks below Stujack Pass. Once I was back in the forest, I ran continuously down, switchback after switchback.

I actually felt as if I was getting stronger as the run continued on! With each step, I gained more and more confidence in my running stride. Back at Lake Metal, I looked at my watch…4 hours. I could make it to the car, 1.9 miles away, in less than 30. But…a poop was brewing. Oof. I had to hold it in. I wanted to break 4.5 hours back to the car. I knew the bottom section well, having run it with Tyler last time, and had mile markers in my head to tick off. Around 0.5 miles from the end I nearly gave in to my urge to poop, spotting a good spot off the trail a bit. NO…keep on going.