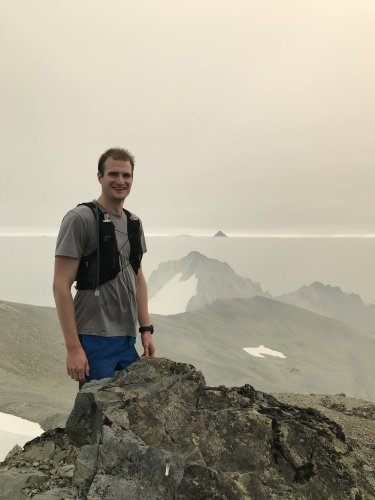 SMOKE…wildfires were rampant through California and Oregon, and the smoke was making its way up to Washington thanks to high winds and high pressure. I wanted to get outside, but to be honest, most places looked pretty disgusting.

On Friday, Tyler and I went back and forth about if we should get outside or not given how poor the air quality was. It seemed that the Alpine Lakes area behind Lake Cle Elum was a “bright”-er spot amongst the smoke, better than the air quality at home or other areas of the Cascades. We decided to give it a shot.

We left Seattle around 6 AM and we could barely see anything on our drive up to Snoqualmie Pass. The smoke was SOOOO thick. As the sun began to rise, the smoke parted somewhat on our drive up to Tucquala Meadows, and for the first time of the day we could actually see 1/4 mile!

The trailhead at Tucquala Meadows was quite empty for a Saturday morning, but with all the smoke it made sense. Most people were staying indoors…and by the end of the day we understood why. We strapped on our running packs, with food, water, and some first aid supplies, and began up the trail towards Cathedral Pass. The climb up to Mt. Daniel is extremely straightforward…there is a boot path the entire way. And at this time of year, early-to-mid September, there is no necessary snow travel.

Within 70 minutes or so we were up at Cathedral Pass and crossed the PCT on our way to Peggy’s Pond. We passed a few hikers who seemed to be camping at the Pond, and continued our way up the climber’s trail towards the ridgeline leading to Daniel. Grass gave way to small scree and rock, and we continued along the ridge. The air quality was deteriorating as we climbed higher, with less treecover and foliage to help break up the smoke.

We could see one party ahead of us along the ridge, but other than that we were the only ones climbing up today. Tyler and I took a quick break to munch on Skittles and Swedish Fish, and then continued along the ridge.

I broke ahead a few feet and continued along towards the East summit, before Tyler stopped me and remarked that USGS had marked the wrong summit point! HA! He was right..looking at the topo map, the true summit was at least 80′ higher than the east summit and about 1/2 mile further along. The group ahead of us had gone to the east summit and proclaimed victory, hooting and hollering from the false summit.

The boot path continued along to the west towards the true summit, and before long Tyler and I were by ourselves on the true summit. It was SOOOO smoky. We could see Mt. Stuart poking out above the smoke, but aside from that there was horrible visibility, barely enough to see the outline of Hinman just a few miles away. Gross.

A fun trip but we both felt pretty ill by the end of it. We had planned to run back down the trail but did not want to exert ourselves that strenuously in the air conditions. I’ll mark this one down as a “scouting trip” for an Alpine Lakes Crest Traverse in the future.