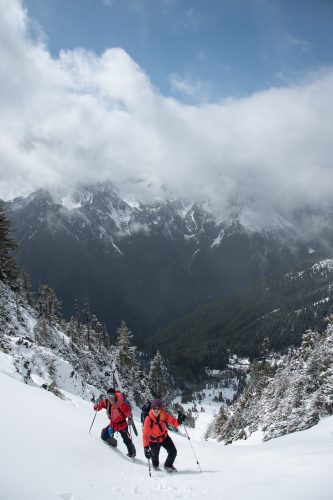 The weekend weather in the Cascades was spotty, with fronts passing through and a mixed bag of rain and snow most everywhere. On Friday and Saturday, I had done two trail runs in the Mountain Loop region; Thursday a friend of mine, Deborah, had messaged me that she and two of her friends were headed to the Olympics to hike and maybe try to climb Mount Stone. A day in the mountains…count me in!

The group planned to meet up at the trailhead at 8 AM; weather was forecasted to roll in around 2 PM, with scattered snow showers and clouds earlier in the day. I brought trail runners for the approach and mountaineering boots for the snow, which I thought would begin around 4,000′ or so.

It was a beautiful morning drive along the inner Olympic peninsula; I saw the sun rising over Puget Sound as I drove with the windows down. What a day to be alive!

I rolled in around 7:30 AM and waited for the others; I reclined my seat to rests my eyes, but before I knew it the others were pulling in as well. Deborah and Matt both had packed similar to myself: boots, crampons, ice axe. Lee brought skis! Man…was I jealous. Should have brought the sticks!

We started up the Putvin Trail just before 8 AM, and began climbing up the valley. The trail begins gradually up towards the National Park Boundary, where it meets up with an old service road, before beginning its steep ascent up towards Lake of the Angels.

We chatted about this and that on our way up, as snow began to trickle down. As the strail steepened, the conversation became more quiet…

Around 4,200′, there is a short section with a hand line for a slippery section of rock. While the hand line may feel like overkill, it certainly is nice for when the rock is slippery, especially on the way down.

Snow had fallen overnight, accumulating to a few inches, dusting the trail starting at around 3,500′. The true snow level, however, was closer to 4,500′, once we reached a basin below Lake of the Angels. Here we transitioned to our mountaineering boots, strapped on our crampons, and headed up a gully towards Mount Stone.

Our boots penetrated around 3-4 inches into the snow, under which there was a firm crust from days of freeze-thaw. We traded off cutting steps; it felt a good warm-up for some summer mountaineering!

There are multiple ways to approach Mount Stone; the “normal” route in the summer begins from Lake of the Angels and then traverses NE towards the W Ridge of Mount Stone. We chose to ascend a gully further to the E and then traverse W. The snow coverage was full, so our “route” didn’t really matter that much. We did have to downclimb a slight bit to traverse back over towards the W Ridge of Stone, but it was not that much of a detour.

It was a BEAUTIFUL day in the Olympics; clouds rolled in and out, but the occasional patches of sun were wonderful…and WARM! Picking up my head up, I could not help but notice all of the ski lines!!

The snow deepened as we traversed to the W below Mount Stone; every few steps we would posthole up to our shins. Man…if only I had brought the sticks!

The visibility was mostly terrible throughout the day…like the inside of a ping pong ball. We stopped occasionally to take our bearings and make sure we were on track.

We reached a col below the W Ridge and began to ascend the ridge; there was a short, steep section of “snice” (snow-ice) that was a BLAST to climb up.

On the ridge, I topped out on a false summit, only to pick my head up and realize the summit was just a bit farther along…we downclimbed a bit, traversed to another saddle, and took a look up at the final summit block.

Traversing across to the summit pinnacle, Matt briefly punched through a moat up to his hip; THAT got his heart pumping! I quickly helped him out and we continued on.

Now it was time for a decision…it was nearly 1 PM and the winds were howling. Visibility was coming in and out, and the snowpack was already starting to warm. Hmmm…we were so close from the summit block, maybe 100′ vertical, around 20 minutes one-way.

Turning around is never easy…but today wasn’t about summitting. It was about adventure, about getting out and experiencing the wild. It made sense: we needed to get down and out of this avalanche terrain as fast as we could, and without skis this would be slow. We made the right call. We returned the way we came, following our tracks rather than plotting a new route in the low-visibility conditions. We downclimbed the snice, postholed our way back down the basin, and returned to Lake of the Angels, just in time for the sun to begin COOKING the snowpack.

Descending back down the Putvin trail, I was amazed how much of the snow had melted…well I guess that made sense. The surface level snow that had fallen overnight was completely gone, revealing the true snow levels. Once we reached the hand lines, I changed back into my trail runners, and we trotted back down the trail to our cars, giddy from an amazing day in the mountains!