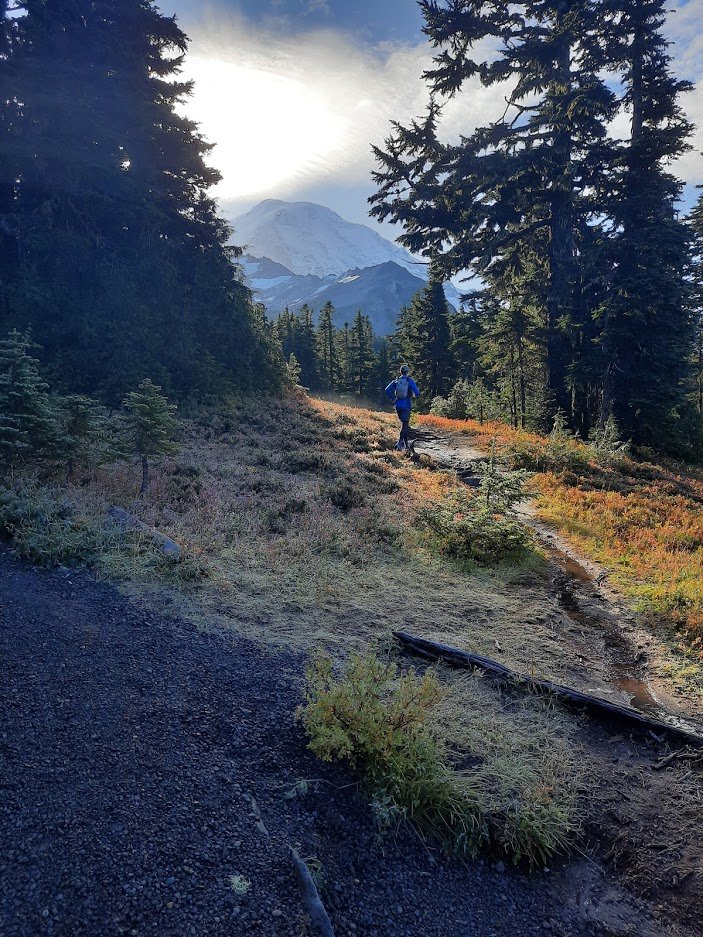 Fall is a hit-or-miss season in the PNW, as I am coming to learn more intimately with every wet, rainy weekend. A clear day was developing on Saturday, with light showers forecast for the late afternoon but clear skies and dry weather for the morning. A weather window!

Tyler and I were both in the mood for a 14-16 mile run. Early in the week, I started to look at the map and realized I had not been to Mt. Rainier National Park yet this year. I needed to change that. I’ve only been to the park 3 times: once to climb the Emmons-Winthrop route from White River, once with my family in the Paradise area, and once to climb the Disappointment Cleaver route.

I initially drew up a loop that explored the foot of the Carbon Glacier; Tyler took my route and modified it to start from Mowich Lake, circumnavigating Mother Mountain and crossing the Carbon River on the Wonderland Trail. In total, our planned route was approximately 16 miles and 4,500′ gain, the sweet spot we were looking for.

We had read that there had been a missing hiker reported in the area, hiking the Mother Mountain loop days before in a severe storm. Search-and-rescue crews were still patrolling the area looking for him. We also had found out that a log bridge across the Carbon River had washed out, the northern crossing on the Wonderland Trail.

Tyler and I discussed the bridge wash out; our plan was:

(a) Try and follow the old Wonderland Trail, which can be seen on the west side of the Carbon River. The trail has been unmaintained and closed for a few years but we wondered if it was still there

(b) Investigate the river crossing and see if there were logjams or other constrictions on which we could cross. We knew the Carbon River would be RAGING but had hope that there might be some place down or upstream that we could cross.

(c) Turn around and head back to Mowich Lake, the way we had come. We weren’t going to risk crossing the Carbon River if we weren’t 100% comfortable with it. We could always turn around.

We headed out of the city around 7 AM and began the drive up to Mowich Lake. The “park entrance” on the Mowich Lake side is starkly different from entering the park from Ashford. Whereas the Longmire entrance has a huge gate, often with dozens of cars backed up in a single-file line, the Mowich Lake entrance was a long, dirt road with a sign that says “Welcome to Rainier National Park.” There was even a self-pay fee station for park entrance, in contrast to the booths of rangers at Longmire. A totally different feeling…

Cars began to pile up along the Mowich Lake road as we neared the Tolmie Peak Trailhead. A clear-ish Fall day with no rain…yep, there were going to be crowds. We parked along the road near Mowich Lake, laced up our shoes, and began to jog down the road towards Mowich Lake Campground.

We chose to run the loop counterclockwise because:

(b) With the Carbon River bridge wash out, doing the loop counterclockwise meant we would get to experience Spray Park, the gem of the route, regardless of if we were able to cross or not. Had we gone the other way, we would have descended down to Ipsut Creek and if the Carbon River was not crossable, climbed all the way back up Ipsut Creek, never having pranced through Spray Park…boring.

We strode along the Wonderland Trail out of Mowich Lake, taking a short detour out to see Spray Falls.

As we climbed higher towards Spray Park, mother Tahoma stood proud in the morning light. WOW…it was good to be back in the park, my first time this year. With my injury in late May, I had been out of the state for June and July and missed out on some prime adventures. Now, in October, I was getting to see the beautiful place that stands out so prominently from the city.

Spray Park was dusted with early season snow, and the water puddles were glassy ice in the cold morning. Tyler and I felt like children jogging through the icy water, shattering the glass-ice like popping bubble wrap.

The snow and ice certainly slowed us through Spray Park, but the views were worth going slower for! A clear Fall day like this is a gem to keep.

Descending down from Spark was slow on the firm, morning snow; clearly there had been a melt-freeze cycle up here, as the crust was not breakable.

Once we entered the forest below Spray Park we were able to find our stride again, cruising all the way down to the Carbon River. We initially took a “detour” to the bridge crossing of the Carbon River to see the bridge, as we “thought” we would be following the old, unmaintained Wonderland Trail to the west of the river.

HA! Turns out the old Wonderland Trail is really closed. We jogged along the west bank of the Carbon River to the trail closure, where there was a faint footpath leading into thick brush. Following it for even a few feet would have been a dance with Devil’s Club (a plant, click the link for Wikipedia and read about those lovely “yellow spines”…ouch). Um…no thank you. So we turned back and crossed the bridge for the second time. We wouldn’t be able to avoid the Carbon River crossing after all, and would have to go and see for ourselves what the situation was like.

The section along the Carbon River was the most runnable section of the trail yet, river-grade and cruiser along the well-maintained Wonderland Trail. We quickly made our way to the northern crossing of the Carbon River, where we saw work crews on both sides of the river preparing to put in a new log bridge. We stopped briefly to chat with them; they said that even though they knew the bridge would likely only last a week or so with heavy snowfall coming soon, it would help the search-and-rescue crews patrolling the area, looking for the lost hiker.

The river was RAGING, and we meandered upstream to no avail. Ugh…I did NOT want to have to turn back around. We continued downstream to see what options there were and VOILA! A logjam, at one of the turns in the river…perfect. It was stable, sturdy, and had wide berth for us to comfortable balance on. We went one-by-one, balancing on all fours with the logs wet from the river mist.

Phew…that was a relief. We continued along the Wonderland Trail, river-grade for a few more miles before we began our gradual climb back up to Ipsut Pass. The switchbacks at the top of the climb were a mental annoyance, but we cruised down from Ipsut Pass to the car at Mowich Lake.