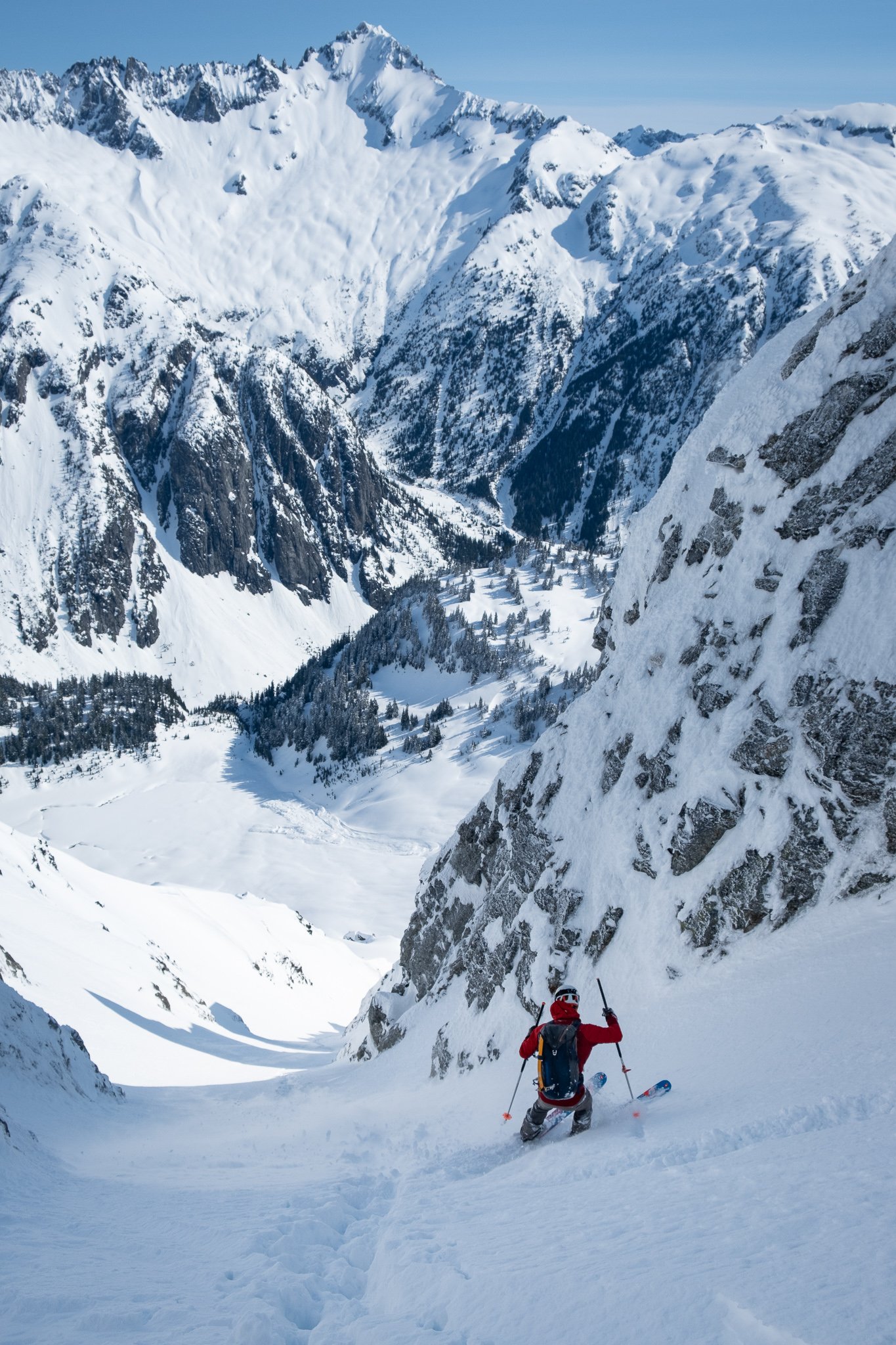 April 2022 has been a return of winter for the Cascades and we’ve been getting powder dump after powder dump. In the winter it’s easier to assess conditions based on aspects with new snow: north, and NW/NE will stay good for a few days because there just isn’t enough sun to bake them. But in the springtime with hours and hours of daylight, even north aspects can get cooked pretty fast.

Nick and I tossed around a bunch of ideas for the weekend after a refresh of powder that came with some significant winds. We were stoked on getting out into the Cascade River Road area but uncertain as to which objective to go for. A while back Nick had told me about a line on Magic Mountain called the ‘Banana Couloir’, a striking line that winds 2,000′ down the shoulder of Magic Mountain. Since moving to Washington I’ve barely skied in the Cascade Pass zone, but have been amazed by the amount of terrain to explore out there.

We had read that the road was clear to around MP 18 so we headed out Friday night to camp out. We agreed on a very early start to the day because of sun exposure and warming; there is a lot of overhead hazard int he Cascade River Road zone with some huge peaks. We set our alarms for 2:30 AM and prepared for the groggy, zombie-like wake-up the next morning.

We started the road walk right around 3 AM and immediately made the mistake of trying to skin once we saw snow. Sadly, the snow was patchy at best until the Boston Basin pullout and we transitioned over and over which slowed our progress. In a few weeks the road will be in much better shape, but there are still a fair number of downed trees to clear. No major wash outs though…

We were able to consistently skin past the Boston Basin TH on firm crust; we could see a skin track heading up to Cascade Pass from maybe a day before…it looked like a party had headed up towards Sahale. Morning clouds shrouded the peaks above us…classic Cascade Pass cloud machine in action.

We made much better progress once we were in the valley beneath Cascade Pass. The visibility was horrible once we reached the pass, but once we dropped down onto the east side the clouds parted enough to see. We hung a high ski traverse down to Pelton Lake and transitioned for our climb up the Yawning Glacier to the base of our line. Thankfully the clouds were hanging on, giving us some shelter from the morning sun.

We traversed over to the base of the couloir from the Yawning Glacier and began the bootpack up the line. The snow was not supportive and the booting was pretty treacherous. Thankfully we had ‘super booter’ Nick to help us out. The bottom portion of the line got sun pretty early on and started cooking, but once we were around 500′ up the line and it turned to the north the shade returned. There is some overhead on climbers’ left of the line but it stays relatively shaded throughout the morning.

The booting took us about 1.5 hours wading through the nearly hip deep snow. We topped out at the col on the NW shoulder of Magic and looked around at the terrain in the distance. We could see Spider Mountain and its impressive North Face, as well as Arachnophobia. BIG LINES!

We booted back down beneath the cornice at the top of the line and clicked into our skis. Nick went first and skied down to a safe zone on the skiers’ right hand side of the line. There was A LOT of sluff.to deal with…we couldn’t really ski it quickly. I went next…then Joe…then Anthony.

The line is consistently steep but wide…it makes for great steep skiing without much hazard beneath you. We weren’t able to ski it fast because of the sluff that we had to deal with, but in different conditions you could ski it top to bottom. There are a few safe zones on the skiers’ right hand side of the line to duck into to get out of the line of fire.

The bottom portion of the line that had seen sun earlier in the morning was funky snow but other than that, the line skied exceptionally well. We took a party lap on the Yawning Glacier and then headed back to Cascade Pass. We saw a TON of loose wet activity as we headed out in the late morning. This is definitely a line to get up early for, as there is a lot of overhead hazard in this zone. Lots of shedding was happening throughout the latter half of the day, and we later heard reports from friends that headed out to Spider Mountain that there were LARGE natural avalanches occurring later in the day.

We got great corn on the final run back to Cascade River Road, before starting the zombie march back down the road. It was sad to have to walk down the road but the patchy snow would have prevented any kind of biking.