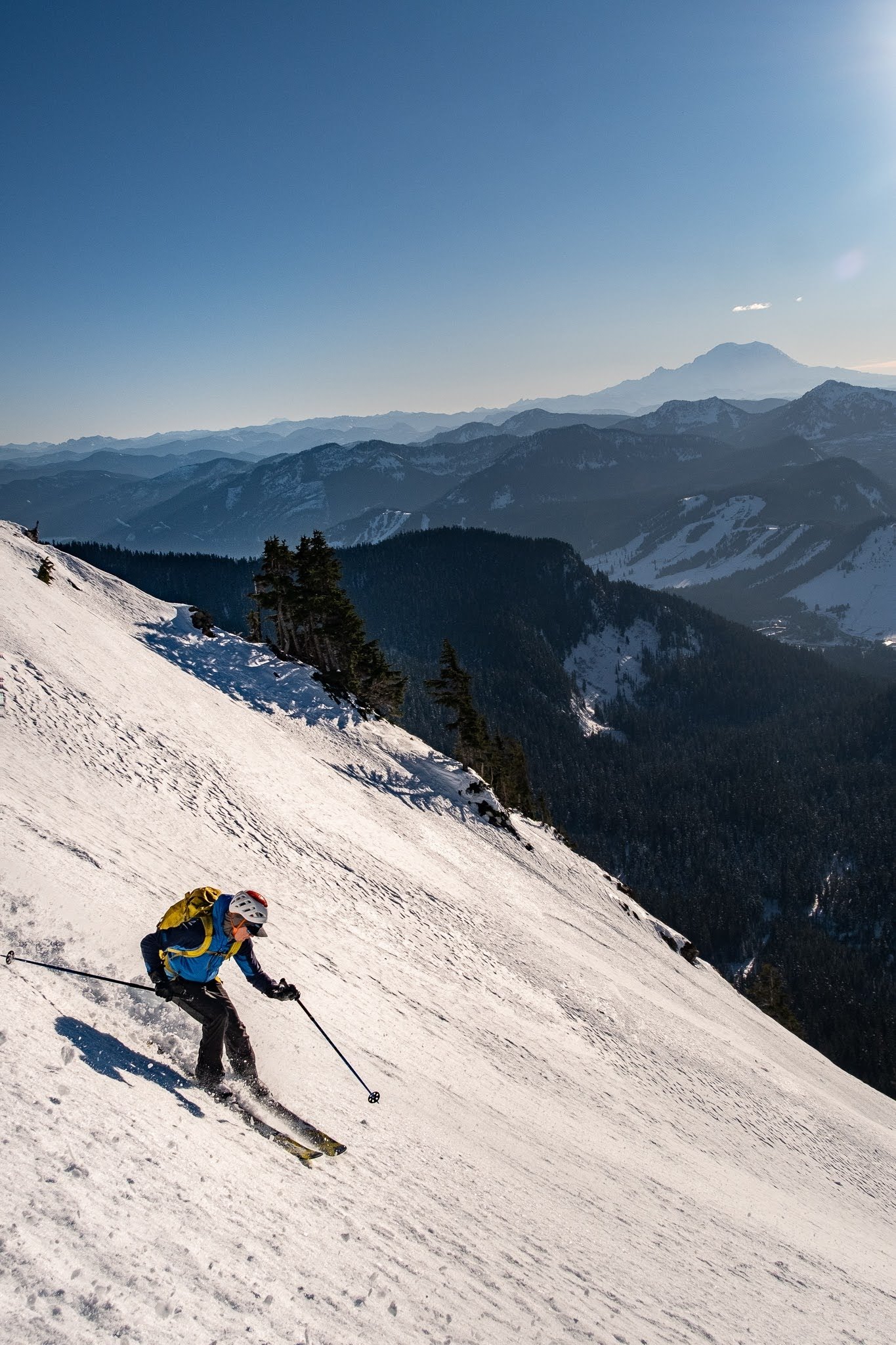 A whole week of high pressure in December felt weird. Conditions were more like April than December…there was CORN and temperatures were above 40 at points in the Casacdes?!?

Nick, Kyle, and I had waffled on what our plan for Saturday should be…we went back and forth, even into Friday night. Nick threw out a last minute audible…skiing Red Mountain in Snoqualmie. Kyle added onto it…linking up the Cocaine Couloir off of the S side of Lundin Peak with the W Face of Red…and possible scouting out the N Couloir off Lundin Peak. South facing aspects had been getting roasted all week long, and Snoqualmie especially had been getting blasted with wind and easterly flow. We predicted that southern facing aspects would be breakable crust and would need time to soften, and based on NWAC observations, we also figured that most W aspects would be pretty severely scoured and windblown. We held hope in the back of our minds that the N Couloir off Lundin might be protected enough to hold some packed powder…but our hopes weren’t high.

We also weren’t sure how bony the approach through the Commonwealth Creek basin would be…but there was only one way to find out. We knew the bridge across the creek would be the crux…and it would make for some funny photos.

We met up at the Summit West parking lot at 7:15 AM. On the drive up to the pass our cars were blasted with easterly winds funneling through the pass. There was an inversion holding at the pass, with temps colder down low than up higher. The fog was light, though, and morning glow above Red Mountain from the parking lot was all we needed to get excited.

There was a snowshoe trail along Commonwealth Creek that led us up towards Red and Lundin. The trail was firm but not icy…but it was narrow, wide enough for a foot or so on either side of our skis. Thinking a few hours ahead…it would make for an “interesting” death luge.

We quickly came to our first “crux” of the day…a log crossing across Commonwealth Creek, topped with snow, just enough to make things interesting. Nick and Kyle kept their skis on and scooted across the log, making for some hilarious moments…

I took my skis off and scooted across, enjoying watching them more than replicating them. We continued to follow the creek towards the head of the valley, which led us towards Lundin, our first objective of the day.

Our plan was to head up to the E saddle of Lundin Peak and scout out the N Couloir, which drops down towards Goldemeyer Hot Springs. We didn’t know much about the N Couloir, so we wanted to scout it out. From the topo, the upper section looked quite manageable, around 40 degrees or so; there appeared to be a cliff band around 500′ or so down the couloir that we would have to stop before.There appeared to be a bench before the drop-off, so we planned to ski down to the bench and then boot back up to the col.

The skin up to the col got icy at times, and I was glad that I had my ski crampons with me. The melt-freeze of the snowpack throughout the week, especially on this southern aspect, had hardened the snowpack significantly. We would have to wait for the sun to soften the Cocaine Couloir before giving it a go.

The wind began to howl at the saddle; there was a prominent cornice above the drop-in to the couloir that we would have to dig out if we wanted to drop in. Nick and Kyle got out their shovels and started clearing the way…Kyle even traversed up and around the cornice so that he could clear from below.

We booted down through our trench to mitigate the cornice, which also got us out of the wind. We popped on our skis and began to make turns. The northern aspect was hard-packed but not bulletproof, instead firmly packed powder. The conditions were good for making jump turns, as Nick and Kyle put on a clinic. I have to say, my jump turns were definitely subpar this early in the season…need to get that in order.

We skied down to the bench at 5,100′ and booted back up the couloir to return to the saddle. Back at the top, the snow had seemed to soften up just a touch…it still felt really firm and like breakable crust. Good enough…we clicked in and began skiing south down the Cocaine Couloir towards the Commonwealth drainage, where we had come up.

We skied down to around 4,400′ before stopping and beginning to traverse E towards Red Mountain. We weren’t sure what conditions would be like on the W Face, but we at least wanted to skin up and asses on our way up towards the face. We could boot up the face and make observations on the snow conditions.

Getting across to the lake basin below Red was a bit funky, but honestly didn’t need to be. We tried to stay higher in elevation, rather than dropping lower and following the summer route. It ended up working out fine, except we had to boot a section to climb up through a drainage, which was “wallowing” through breakable crust for a hundred feet or so. Kyle enjoyed it.

Once we reached the lake basin we looked up and saw…a BOOTER! Put in by snowshoers ahead of us. It was my turn to set bootrack, since Nick had set it going up to Lundin and Kyle had set it returning up to Lundin after dropping into the N Couloir. I got lucky!

The W Face of Red was impressive, a long run-out, a pure clean line. The snow looked firm and hard-packed, but the sun was high above and appearing to warm it up as we made our way up. Booting up the ridge, we made observations along the way, noting where the wind had scoured the face worse, where there appeared to be some “ripening, December corn” (is that even a thing?!).

At the top, we agreed that the snow felt good enough on the way up to ski down. There were pockets of good corn, as well as pockets of wind-blown garbage, so we would just have to take it slowly. Kyle went first, then Nick, then myself.

The snow was inconsistent, varying from corn to wind-scoured to breakable crust, but overall was good enough for us to ski the W Face and feel good about it! That’s a win in my book.

The tricky part of the day was the exit…which ended up being MUCH better than I expected based on what we came up. Kyle and Nick navigated us high and to the east, more towards the exit of Kendall Trees/Kendall Peak, rather than following the uptrack we had come up on.

We were able to ski all the way back down to the road, with only minor B*S here and there. There were a few open creeks to manage, but overall the skiing was a typical Cascadian exit: crusty, lots of hockey-stops, and an appropriate amount of death luge.

From the car, I glanced back at Red, as the sun began to set. We were there…