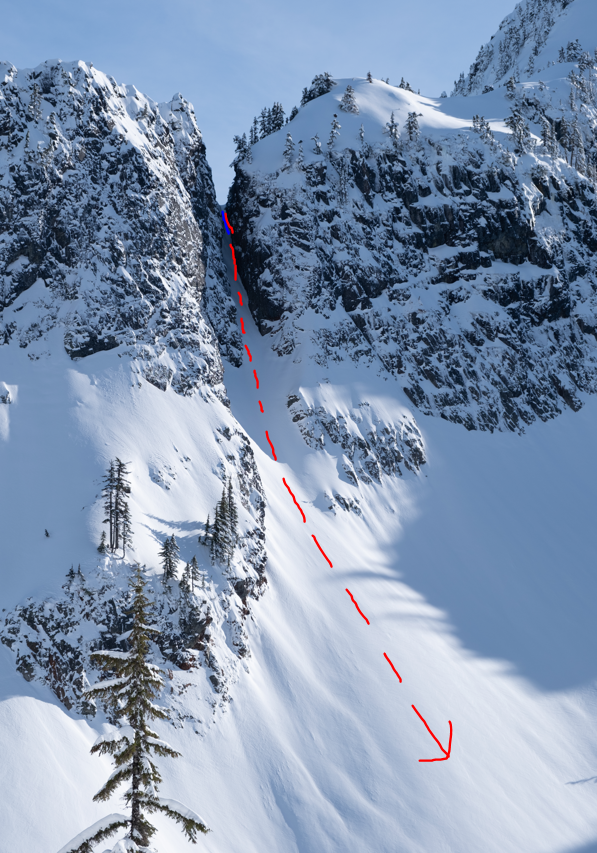 Little Alien Couloir is one of those lines you travel by dozens of times before you commit to putting in the work to ski it. It’s short, but steep, staring down at you as you skin across Chair Peak Lake. A few years ago, Kyle and I skinned/booted up to the base of the couloir where the rock walls start in earnest. But the booting became a wallow and we had other lines to ski, so we ended up just farming the apron.

With a great north facing powder dump and a sunny/clear day, I really wanted to give it another try…even if it meant a full on wallow to the top. I had some work commitments in the morning, so it felt like a great way to ‘spice up’ an afternoon Chair Peak circumnavigation.

Todd, Shannon, Anthony, and I left North Bend around 9 AM and got a leisurely start from Alpental upper lot at 10 AM. We opted to ski the north slopes down towards Snow Lake to milk some good north facing powder. We bumped up a little ways towards Melakwa Point and wiggled our way down the north slopes.

The day was clear, calm, and quite pretty. Once we reached the bench above Chair Peak Lake, we got great views of Little Alien. The snow looked really well kept and protected…but it was going to be DEEP wallowing haha.

There are 3 common ways to get into Little Alien:

The tricky part with #2 and #3 is the top of Little Alien, in early season/thin conditions, is really tight. Tighter than a ski’s width. You ~usually~ don’t need a rappel to get into it from the top-down, but your results may vary (please don’t sue me haha). We opted for #1 and just committed to the wallow. We felt comfortable with the snow stability that we weren’t worried about remotely triggering a slab above us.

We skinned up to the base of the apron where it starts to meet with the line itself, then transitioned to booting. For the first hundred or so feet, the booting was actually quite easy. We were bottoming out on a rain crust maybe 8-10 inches down. Once the pitch steepened, though, it became an all-out wallow. The alpine knee, overhead hand shovel, and pole grab-and-shovel techniques were used to the fullest.

We trenched our way to about 15 feet below the top of the couloir. Here’s where we started to face the existential crisis:

Do we boot to the top, where it’s not ski-width…only to sidestep down? A straightline in this setting didn’t make sense for any of us, as the couloir’s fall line is INTO the rocks on skier’s left.

Do we transition 15 ft below the top, where it makes more sense from a continuous ‘ski’ perspective? But will certainly leave us with an asterisk* feeling in our minds?

We opted for the asterisk* and transitioned where we could actually ski. In fatter snow conditions, the top becomes skiable when the rock on climber’s left gets plastered with wet powder. Not today…

As the photographer in the group, I claimed first tracks to “get pictures of everyone coming down”…LUCKY ME! It was really fun riding the fall-line ramp down skier’s right-hand side of the couloir. I created a slough river that helped fill in our trench on the left.

The snow was exceptional, even if the couloir felt REALLY short. There were about 5-6 good turns then it opened up to the apron, which was more good turns but not couloir. STILL WORTH IT!

We added in a lap of the Cupcake Couloir off Melakwa Pass for good measure, then headed up to Bryants Couloir and skied out at sunset. Good freaking day!