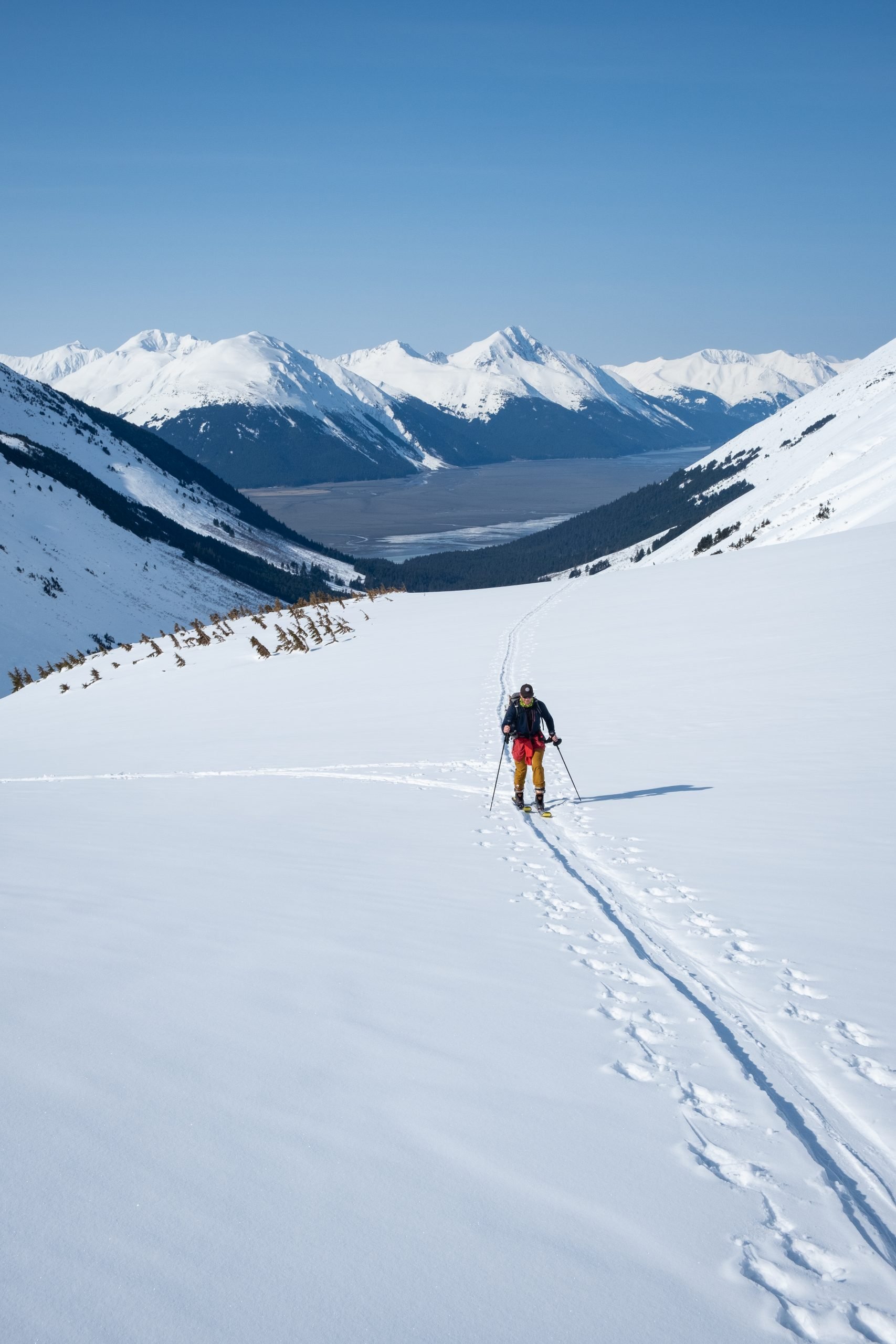 Anthony and I had driven all the way back to Anchorage from our brief stint at Thompson Pass, so we didn’t have much time for trip planning. Fortunately, Anthony’s friend Emily had a great idea for us in store…

Emily and her boyfriend Sam had hyped up the ‘Kern Creek’ circuit, a tour that starts from Turnagain Arm and climbs to the head of the Kern Creek drainage towards peaks like Highbush, Lowbush, etc. The zone is tucked behind Alyeska, a ski resort just outside of Anchorage. By Alaskan standards, the tour involves ‘a long approach’ and ‘bushwhacking’, but compared to Washington it seemed reasonable and tame. It was an odd feeling to be thinking about touring starting from sea level though!

We opted to exit out to Alyeska, instead of returning the way we entered, because we were pretty confident we’d be able to find a hitch back to our car.

We started touring from a pull-out on the Seward Highway by Kern Creek…literally at sea level. We walked across railroad tracks, pushed our way through some bushes, and within 30 minutes we were in the alpine. What an ‘approach’?!?

The aesthetic of being high above Turnagain Arm was pretty neat, and we couldn’t stop looking back at the water.

Our initial plan for the day was to ski the east face of Highbush and the NE Couloir of Highbush, but that quickly changed when we saw cool lines on Bearberry Peak right above us. We were like kids in a candy store and couldn’t keep our hands off the low-hanging fruit right in front of us. We opted for a quick lap on Bearberry before continuing on.

The snow, somehow, was still blower on north aspects. It hadn’t snowed in weeks?!?! We booted up to Bearberry, as the skinning conditions were a bit tough. Before long we were along the ridge of Bearberry staring at Turnagain Arm again. That view will never get old.

We chose a fall line descent just to the E of the true summit; there are lines everywhere on the face….you can’t go wrong with your choice. Anth went first so I could grab a few pics of him descending.

Then it was my turn. The top bit was just steep enough to make things interesting; the snow was skiing super well, soft on top of firm underneath, making for a fast ski surface. WOOOOOO!

We wanted to keep lapping Bearberry, but knew that we should keep on moving ahead. We followed an old skinner up towards the col east of Lowbush, but transitioned to booting since the southern was still firm and crusty.

The cirque we entered into went on forever! The scale of Alaska never gets old.

Looking into cirque we got eyes on Highbush Peak. We knew a group had skied the S face the day before and could see their tracks; they had kicked off a wet slide, which made us reconsider our plan for the E face of Highbush. Plus, looking over to our right we saw a sweet little line on Peak 1203. Once again, we opted for the low hanging fruit and headed over for fun skiing.

There were two lines that caught our eye: one mini-spine and one line on the north face. The spine skied great; after a quick lap we skinned back up for the face. Anthony managed to find the only bad snow of the day and skied crusty pow; my going second allowed me to move slightly over to the better snow. My reputation of being a snow snob continues!

After our two laps, we headed over to Highbush…finally. At this time of the day it was quite warm and we felt like we were melting. Looking up at the east face, we were glad we hadn’t skied it. There was a ton of avalanche debris that had flushed through the constriction.

We were tired and debating on just exiting, but I had a desire to check out the NE couloir. It looked like such a king line from the topo that I needed to at least see it. We booted up into it and were a few hundred feet from the top before we bailed due to wind slabs. MAN! It looked like such a sweet line but we had a bad gut feeling about the stability. We backed out and skied the north facing exit towards Winner Creek towards Alyeska.

The creek became dead flat and we had a few miles of skinning to get out. We started goofing around, listening to music and trying to glide as much as we could. Eventually we stopped and ripped our skins and skied crusty all the way to Alyeska. We were able to snag a hitch from a dude named John. Thanks John!