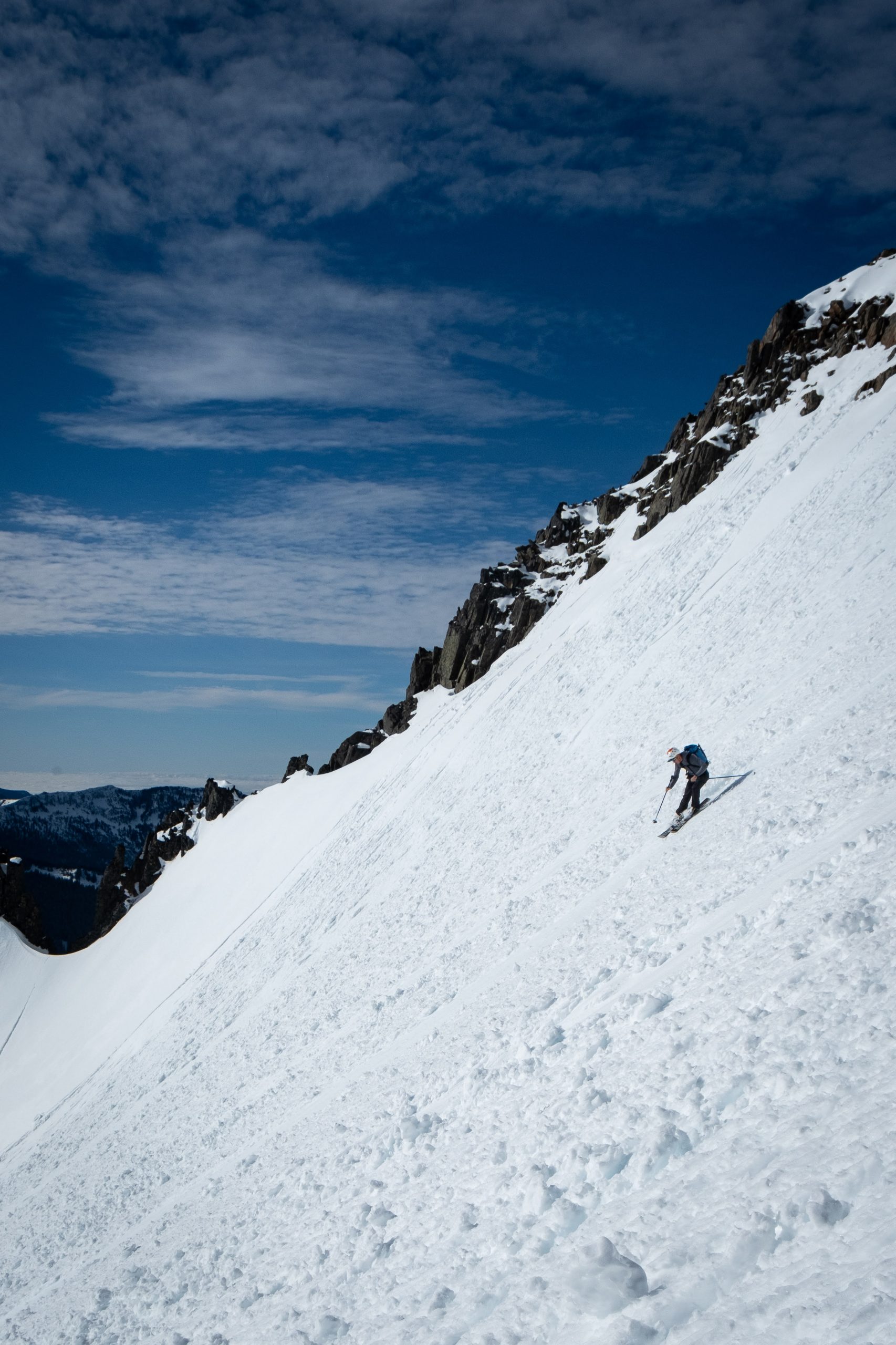 A long spell of high pressure and warm temperatures turned January into June-uary. Very quickly, north facing lines turned to an icy, scrape filled nightmare, and my sights turned to south facing lines that were normally reserved for the springtime.

Kaleetan Peak and Granite Mountain are two gems of the Snoqualmie area, known by many because of their prominence and accessibility in the summer. In the winter, it’s a bit of a different story, and I had yet to ski them.

Kyle and I had been throwing around ideas throughout the week, and our eyes both turned to Kaleetan and Granite. I had been up on Kaleetan in the summer with my friend Tyler, and as I scrambled up the rocky south gully I couldn’t help but think of skiing down it. And Granite Mountain…it’s always a sight on the drive up to the pass. We HAD to ski that too!

Our friend Nick Murad had skied both as a traverse in similar conditions the year prior; we were stoked to give it a go.

Kyle, Rio, and I had some hiccups to start the morning, but we met up at Granite Mountain trailhead and shuttled over to the Alpental Parking Lot, only 30 minutes late. Our plan was to skin up towards Bryant Couloir, boot up the couloir, drop over to Melakwa Lake, and then from there gain Kaleetan Peak via the ‘White Ledges’…i.e. the East Face of Kaleetan. We would gain the shoulder of Kaleetan and then boot up the couloir on the S Face that we would ski down. From there, we would ski fall line down to Tuscohachie Lake, cross the Pratt River, climb to the saddle above Denny Lake, then climb the final ridge to Granite Mountain Lookout. From the lookout, we would ski the south face of Granite down to our car. Easy peasy…right?!

Surprisingly, the skin track up to Source Lake was not icy, at all. We feared that with the inversions down low and the spring-like conditions, that the skin track would be an icefest. Thankfully, the few inches (2-3) that fell on Snoqualmie was enough to stick to the crust below and make travel simple and fast. No ski crampons needed for us!

We were all alone on the way up to Source Lake, which was an odd feeling considering it was a Saturday in the Alpental Valley. Normally this would be a conga line…instead, we had it all to ourselves.

We took a left once we reached Source Lake and followed a skin track up towards Pineapple Pass. Once we reached a bench below the final slopes up to Pineapple, we diverged and began to climb to climber’s right towards Bryant Couloir. There was one short section that we booted because the snow was not adhering well to the crust layer beneath, but other than that we skinned the whole way to the couloir. We reached the couloir just 100-200 vertical feet beneath the top. From there, we booted to the top of the couloir. The snow firmed up near the top to a firm neve; we were glad we had brought our ice axes.

We transitioned and skied down the west facing slopes towards Melakwa Pass. The snow towards the top was a breakable crust that was not quite supportable, but as we got lower down and onto more sun affected slopes the snow was closer to cream-of-corn. Not quite great, but not awful. Kyle disagreed…

We traversed over towards Melakwa Lake, passing through an avalanche debris pile that nearly ate one of my skis. Thankfully, I didn’t completely wipe out.

We transitioned and continued our climb up towards Kaleetan Peak. The snow was getting hot and manky, not quite glopping but getting heavier. Uh oh…

We took a look at an alternate way up to Kaleetan through a notch in the ridgeline, but it was obstructed by a massive overhanging cornice. We did not like the apperance of the cornice, nor the fact that the warming of the day would make it even more likely to collapse. We agreed to continue up towards the east shoulder and assess once we could get a better vantage point.

The slopes up to the east shoulder looked like firm, steep snow. We each had one axe and crampons, so we figured it would be manageable. There was some overhead hazard of rockfall that we would have to contend with from the face itself, but we agreed that if we moved efficiently through the area that we would be able to mitigate that risk adequately.

Kyle led the way up the face, bravely kicking steps into what was even firmer neve snow than we had expected. I will admit…I got sketched out. I could not stop thinking of my accident years prior where I fell hundreds of feet on steep snow just like this. PTSD kicked in and my thoughts quickly became irrational. I cursed and groaned…honestly, my mindset wasn’t very productive. I went very slowly through this section, blasting my ski boots into the firm, hardpacked snow until I felt like I had purchase. We probably lost 30-40 minutes due to my anxiety, but in the end I made it up to the east shoulder. Thank you Kyle and Rio for putting up with my irrational fears.

Once we were on the east shoulder, the final few hundred feet to the top was much more straightforward and less sketchy. Kyle, once again, led the way and set the booter to the top. I can’t claim to have contributed much in this respect for the day…sadly. Thank you Kyle.

The climb up to the top of Kaleetan was TOASTY…we were getting cooked from the reflective heat on all sides, from both the rocks and the cooking snowpack. Near the top of the “couloir” proper, the rocks became a bit “sharky”…it looked like we’d be booting down a bit before skiing.

The summit was amazing…views all around. It was TOASTY warm and we enjoyed the break to our day. We ripped our skins and booted back down a few feet to avoid completely destroying our skis. I side slipped a bit until I was able to make a few hop turns. The snow was slushy and sliding a bit, but nothing more than surface sluff. Kyle went next…then Rio.

Once out of the couloir, we poked out to skier’s right to ski the face proper. There was an old bed surface that had turned to good corn! We ripped some turns down the slide path, before returning to the hot pow.

We continued down Kaleetan to Tuscohachie, which took us almost an hour. The routefinding was somewhat tricky at points, but overall not too bad. The bigger time delay was how tiring the skiing was! The snow was heavy and took a lot of effort to maneuver through. WOOF!

We stopped to fill up water, and Kyle taught me the ski pole-carabiner method. SCORE!

Once we got all the way down to the Pratt, things got a little weird. We couldn’t quite find a snow bridge that wasn’t completely sketch across the river, but we were able to find a way down to the creek. Rio tried to dash across the river quickly, but mentioned that he got water in his boots. I wasn’t sold on wet boots for the rest of the day, so I took off my boots and forded barefoot.

There was a perfect sitting rock to put my boots back on; it took me a minute to get my feet dry and warm again, but hey…I had dry boots! We then continued on our long final climb across the Tuscohachie Lakes up towards Granite Mountain. Thankfully, Kyle put his foot on the gas pedal to get us moving, as I was feeling sluggish and slow from all that tenuous traversing on the icy slopes up to Kaleetan. He was determined to lead us on to Granite before the snow refroze.

The light in the valley up towards Granite was quite magical, a late afternoon glow unlike anything I’ve seen in a while. While the day may have felt like summertime, the early afternoon glow certainly felt more like winter. On the slopes above Denny Lake I turned around and admired the evening glow on Kaleetan. Man did it look steep from afar!

At the top of Granite we saw our friends Phil and Joe, who mentioned that Nick and Kate were coming up for another lap! What a coincidence…I feel like the only people I see in the backcountry are the people I know. The sunset glow was fading…it was time to ski.

SUNSET CORN! Skiing Granite Mountain overlooking the highway in corn was pure bliss. I had feared it would be refrozen garbage, but it turns out it was just a magical experience of soft snow and evening light.

We took the slide path nearly all the way down, but diverged when the trail picked up. We took the trail switchbacks down to the car, through a few sections of rocks and shrubs. Overall, the exit wasn’t terrible and was quite manageable even in the fading light.