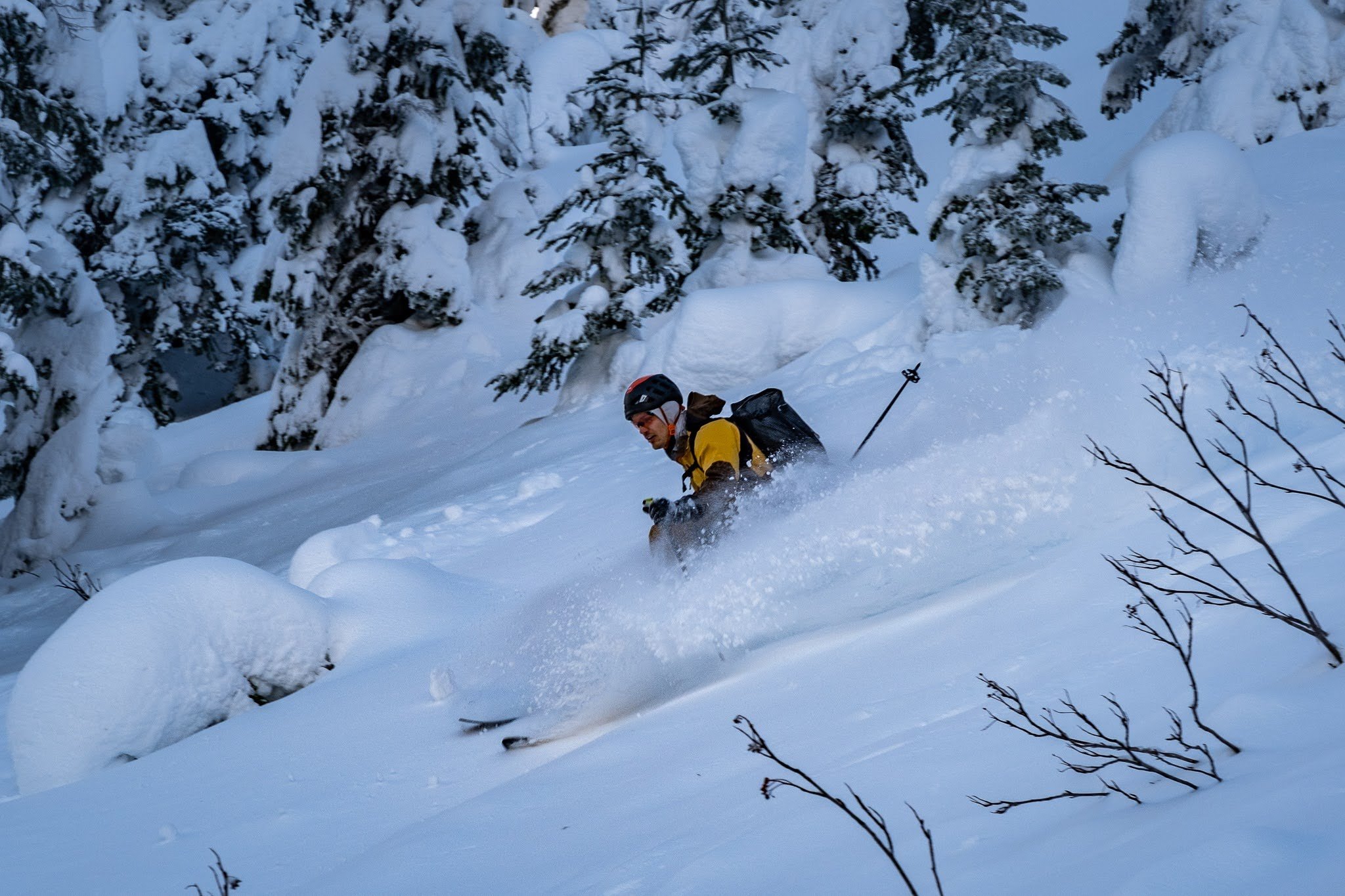 Friday had brought intense solar radiation to the Cascades, warming southern slopes and creating a freeze-thaw cycle that resulted in a thick crust layer. Kyle, Steve, Logan and I joined up to give Jim Hill Mountain a go…we were on the hunt for cold, northern facing powder. We thought that the northern aspect of Jim Hill would deliver…and we were sort of right.

Stevens Pass had barely gotten any snow the night before with a forecasted storm; based on our observations, only 1-2″, TOPS. On the contrary, it was clear that it had rained at the pass level, and the snow line appeared to be hovering above 4,000′. That meant starting out, the snow was HEAVY, rain affected, and straight garbage.

We parked in a pull-off by a utility station around 0.5 east of the Stevens Pass Nordic Center. We crossed the highway carefully and threw on our skins on the snow piled up on the shoulder of the road. We skinned alongside the road for around 0.25 miles before turning onto a logging road that we began to follow. Normally, with more snow coverage, you can immediately climb on the western side of Henry Creek, but in the early season the coverage was very thin so we decided to continue following the logging road higher up. This was more circuitous but more pleasant, as we were able to follow the low-angle road up to 3,700′.

Once the logging road diverged, however, we needed to begin sidehilling towards Henry Creek. This is when things got interesting…or more fun, as Steve would say. The slide alder on the slopes above Henry Creek was THICK and the snow coverage was poor, more typical for early season than most of the other areas I had seen this year thus far.

We began to shwack, smack, and thrash our way through alder, trying to push through to avoid crossing Henry Creek. Most parties will cross the creek and ascend the drainage on the western side of the creek, but because the snow coverage was so thin we opted to climb the eastern flank of the drainage, aiming to gain a bench around 4,800′

Climbing up the eastern side of the drainage was steep but manageable, especially with the heavy snow that was underfoot. We were surprised when, nearly on the dot, the snow changed to powder around 4,000′, quite abruptly. We began to get more motivated to continue along seeing better snow!

Along the way up, Kyle and Logan had mentioned their Lanham Lake approach a few years back and we began to think as a group, “Hmmm…we should just exit via Lanham Lake instead of skiing down this garbage!” We would make it a “traverse” of sorts…kind of.

Once we gained the bench around 4,800′ we began to traverse east towards the alpine bowl beneath Jim Hill Mountain, where we aimed to ski for the day. As we climbed higher, we got sight of the open bowl.

We began to notice significant wind affect on the snowpack; there were two layers, a top layer of 1-2″ that was holding together, and another one 5-6″ down. We began to have concerns about wind loading and slabs propagating, and a few ski cuts gave us enough pause to stop and transition around 200′ below the summit, with concerns of continuing up any higher. Ultimately, we found the snow to be stable on our ride down, but were glad with our decision.

We found better snow down lower, around 5,200′ just below the col between the Lanham drainage and the Henry Creek drainage. We skied powder through the trees and glades below the col before starting to lap it.

We found the snow better down low and had fun taking laps on a small bowl beneath the col. Kyle and Logan tried a few jumps while I manned the camera.

Our exit via Lanham Lake was…INTERESTING to say the least. The trees were thick on the way down to the lake, preventing us from making any kinds of coherent progress. Sideslipping and slamming into trees definitely were frequent, for me at least. Once we made it down to Lanham Lake, the luge track along the trail made for another interesting end to the day. The trail was bare in some spots over creeks, so hockey stops and braking for dear life kept the adrenaline pumping.

All in all, this was a true Cascadian adventure that reminded me it’s still November…there is more season left to come.