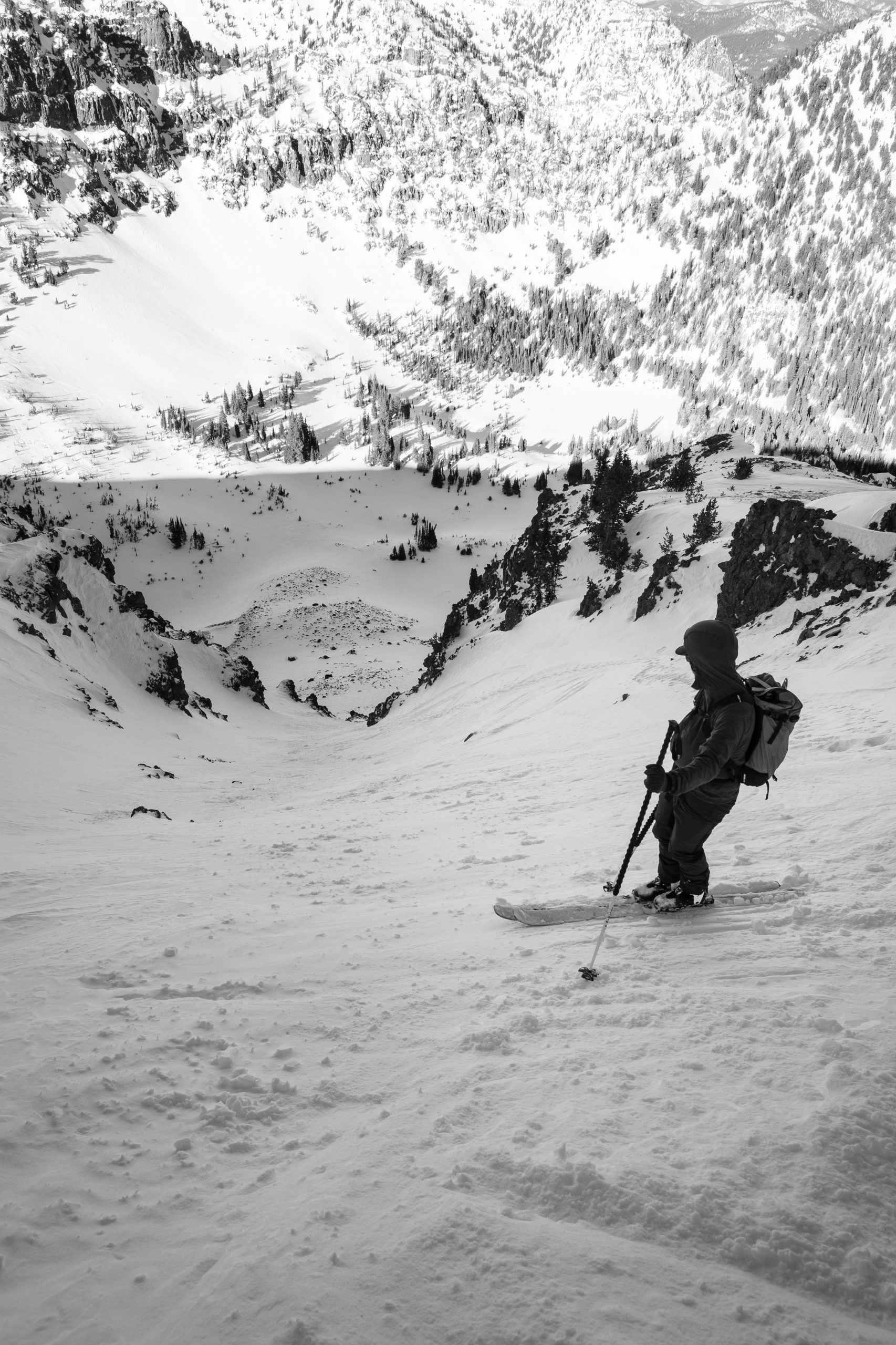 As part of my short trip out to Bozeman, Logan and I had been throwing around a few ideas for the 3 days I would be there. The day before we had skied the SE Couloir on Emigrant Peak, so we were looking to expand our explorations into a different zone.

Logan had been dreaming up a full Hyalite ski traverse after reading a trip report from 2013, linking up some of the prime ski lines that Hyalite has to offer. Logan’s full vision was:

It would be a big day, not necessarily ‘vert-wise’ but mileage wise. The total stats for the day would be just over 17 miles and 8,000′ of climbing. The approach to Hyalite alone was going to be 6 miles, just to get to the first ski line.

We agreed that we were up for the test, and talked through the terrain for the day. Most notably, there was one specific bail point that made sense for the day: out the Maid of the Mist drainage after skiing the Fat Maid. The drainage exiting from the Pinner has an icefall that we would not have been able to descend down. We needed to make our call on moving on after the Fat Maid, or we were committed to finishing out the traverse.

We agreed on an early start for the day, setting alarms for 5 AM and hopping in the car at 5:40 AM. Thankfully, the drive to the end of Hyalite Canyon was amazingly fast, and we were skinning by 6:30 AM. We had headlamps on for the first 30 minutes or so of the approach, but quickly the light began to stream through the trees.

The approach up Hyalite Creek was mentally exhausting; extremely low angle, with confusing switchbacks. It reminded me of climbing up Mountaineer Creek towards Colchuck Lake, the torture of exploring ski lines tucked far into deep valleys.

Once we popped out of the trees we could see Hyalite Peak just as the sun began to poke out behind its shoulder. We were the only ones out there…alone amongst the popular canyon. It was an awesome feeling having this area to ourselves, no other people to change the ambience.

We took a quick break at the base of Hyalite and noted our first line of the day, the north face of Hyalite Peak. It wasn’t anything extraordinary, but there was a small gully that looked like a fun feature. We agreed to boot up to the summit and then ski back down. Our traverse would then take us up along the saddle towards Divide Peak, where the North Evil Twin lives.

The hike up to Hyalite was bone dry along the ridgeline, a classic Montana feeling of boom-and-bust snow.

We hiked back down a bit to the start of our ski line, where we clicked in and skied hardpack down to the bottom of the bowl where we had been just minutes ago. Not great snow, but at least skiable!

We spotted another skier blitzing their way up to Hyalite…they were really moving! We headed up to Divide Peak along the ridgeline, as opposed to booting up the South Evil Twin. We weren’t convinced that the North Evil Twin was “in”, so we were going to bypass it by hiking around the climber’s left-hand shoulder and then dropping into the bowl. We found a break in the cornice and clicked in to our skis…but not before spotting the North Evil Twin. It was NOT in…phew, we were glad that we didn’t try and go ski it.

We skied windboard down into Divide Basin, where we’d have a flat traverse over to Maid of the Mist. This would be a longer section of no real skiing…sad. We traversed over to a flat spot, where we basked in the sun for a few minutes. It really felt like spring…we forgot it was JANUARY!

Getting across to the top of the Fat Maid was both tricky and slow moving. We needed to ascend to Divide Peak, then take the ridgeline across to an unnamed point where the Fat Maid drops from. The ridgeline was corniced on the east side, and the west side was windswept and lacking snow.

We pondered a few different options:

The main reason we opted not to continue along the ridgeline was more because of tedium than safety. The ridge would have gone…we were just tired of postholing without skis on.

The skin up to the top of the Fat Maid was SLOW. The southern aspect was getting cooked by the sun, and there was a clear change in the texture of the snow with all the radiation. The snow was sliding on the firm crust beneath in certain spots, which gave us a moment of concern. We opted to continue moving up on the aspect we were on, as we weren’t overly concerned with large slides, more-so tedious slipping and sliding trying to cut skin track.

Finally…after almost 3 hours of NO SKI LINES…we made it to the top of the Fat Maid. We were pretty fried, not going to lie. It was more a mental exhaustion than physical…transitioning from booting to postholing to skinning, with no downhill in between. The Fat Maid had been skied by quite a few people before us, but it still looked quite fun. Logan went first, side stepping his way down into the couloir through some initial rocks. Classic Montana feel…

I followed and we looked down the line with anticipation. It looked firm but FUN.

Turn-by-turn, we made our way down the firm windboard. The snow was poor, but the aesthetic was quite good.

At the bottom of the Fat Maid, we looked up at Arden Peak. If we were going to continue along on the traverse, we’d have to either boot back up the Skinny Maid, or do some shenanigans along the ridgeline to climb up and over Arden Peak. It was 2 PM and we were both kind of mentally drained. We opted to take our boots off, enjoy the sun, and descend down to the valley through the Maid of the Mist drainage, as opposed to continuing on.

Here’s a summary of our main thought process:

We both agreed to head in for the day. We had fun, were healthy and not injured…that’s a win. We learned a lot and made some mistakes, but none that were costly. Overall, it was time to call it a day.

The descent down the Maid of the Mist drainage has a reputation for being bushwhacky and messy. It certainly was down low, and we took our skis off at one point and just walked down.

Once we made it back to Hyalite Creek, we skated along the trail and skied the luge track back to the car. At what point I nearly hit a pair of hikers on the trail after yelling “WATCH OUT”, but thankfully they jumped to the side just in time.