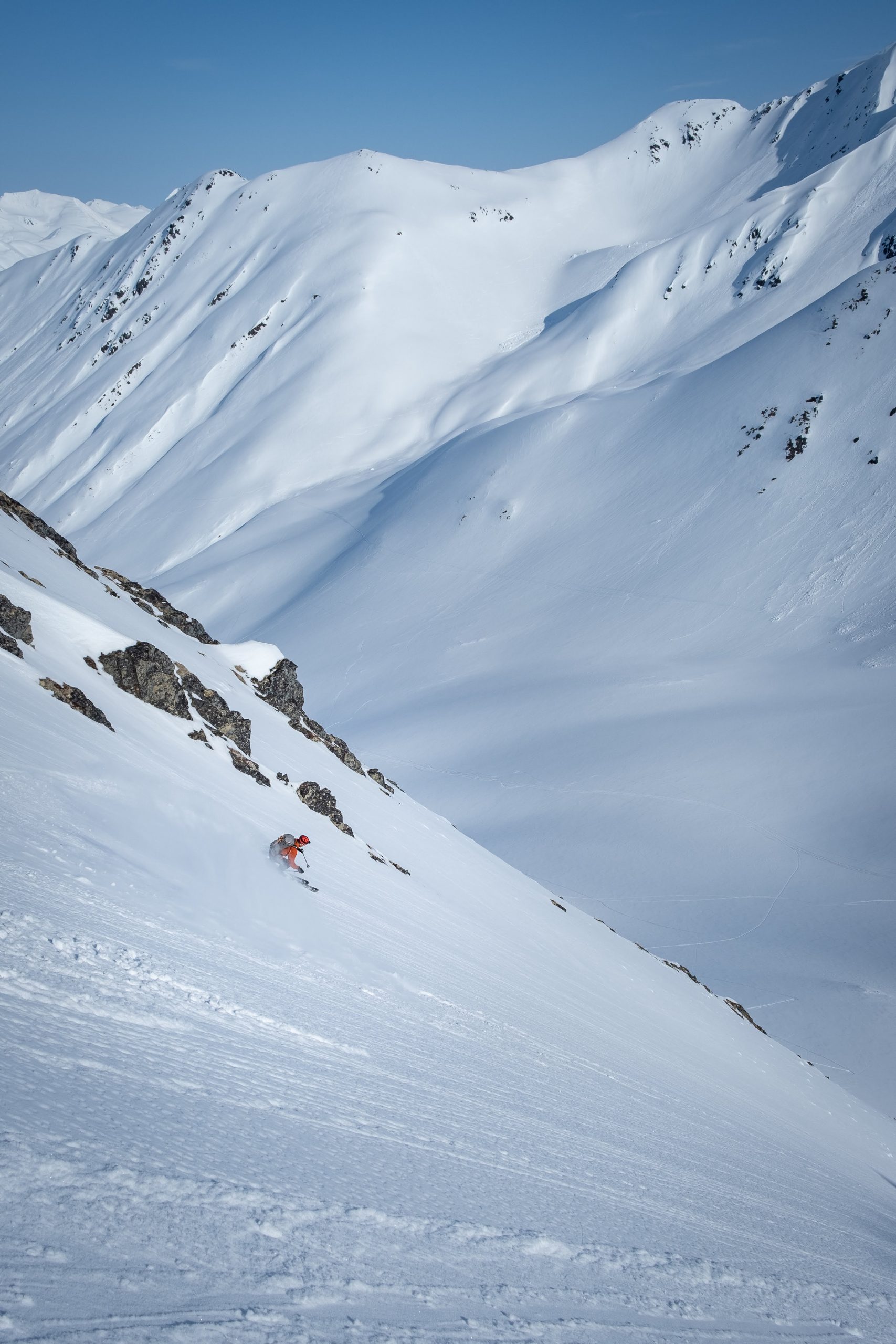 My favorite way of finding ideas for things to ski is just doodling around on Caltopo and looking at slope angle shading. It’s pretty exciting to just scour a map and look for cool lines.

I had been poking around in the Turnagain Pass zone when I saw a series of north facing couloirs that caught my attention…one in particular was pretty dang striking on a map. It was a north facing couloir on a peak called “Grandaddy”. I marked it and kept looking around, but my mind couldn’t help but be intrigued.

After typing in a quick google search of “Grandaddy couloir”, I got a TON of hits…turns out it was a popular line that sees pretty decent traffic, by Alaskan standards.

But it wasn’t just the main chute that intrigued me…there were SO many lines just stacked up in a row along that ridgeline! Perfect for harvesting!

Anthony and I initially planned to ski the “Grandaddy Chute”, the main line just off the W shoulder of Grandaddy Peak, and then link up with the NW Face of Pastoral Peak, and potentially with the NE bowl of Sunburst Mountain.

However, very quickly on the skin in we bailed on that plan after seeing SO many cool lines on Grandaddy Peak’s ridgeline. We couldn’t help but just harvest good, steep north facing lines!

The first line had a booter in already, so we cruised up to the top of that line and enjoyed awesome sheltered pow for our first run of the day!

Run number two was even better!

We hit a third lap before heading to Grandaddy Chute…finally. We opted to boot up the climbers’ left hand side of Grandaddy Chute instead of taking the broad ridgeline at the top of the valley. At the time, we did this because we weren’t sure above the access to the peak and the cornices on the top. Looking back now, the ridgeline would have been MUCH easier than the 1,500′ of booting we did. We had to do a sketchy traverse on the S side of the ridge to get around a MASSIVE cornice that prevented us from dropping straight into the line. The S side was baked from the sun and a firm crust; taking our skis off and booting was a bit precarious, but not horrible.

The Grandaddy Chute itself was actually the worst skiing of the day…LOL. It was wind hammered and kind of a weird terrain feature; it wasn’t a couloir but rather a large “wedge” that just funnels down. I skied on the skier’s right hand side of the “wedge” and made some hop turns in funky wind chunk. Yum…

The north side still had one more run left for us! We had considered heading up the ridge to Pastoral but were tempted by the easier exit out of the drainage we were in. We hit a quick lap on the eastern most run in the valley and headed in. Our exit run we even got some fun corn at the bottom!