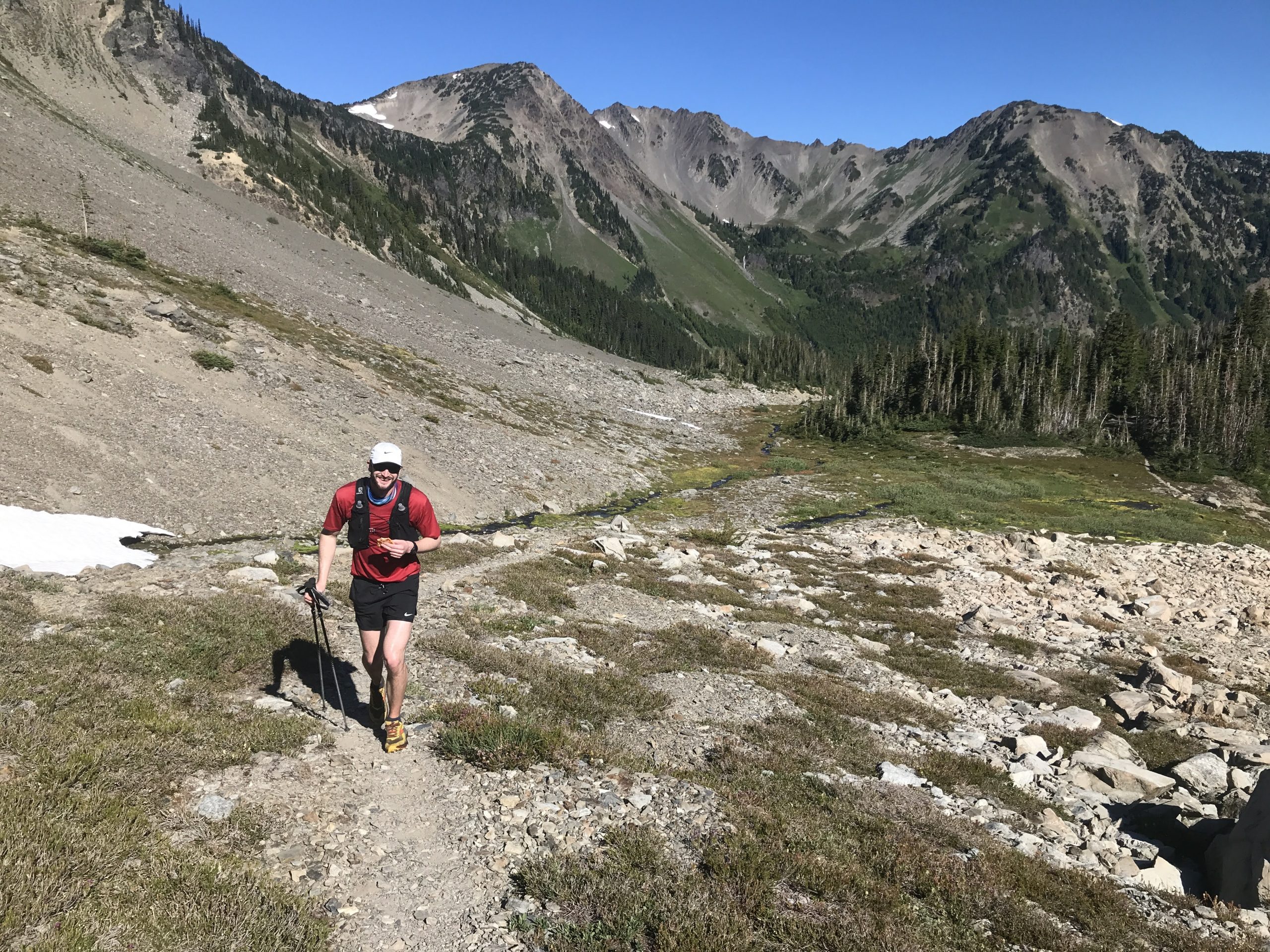 This summer I really wanted to tackle the ‘Grand Loop’, a 42 mile/12,500′ loop in Olympic National Park that covers some pretty amazing terrain (link to FKT site: https://fastestknowntime.com/route/olympic-national-park-grand-loop-wa). There are sections along broad ridgelines, through wildflower meadows, and down river valleys…making a comprehensive ‘sweep’ of the northern Olympics in a day. I’ve only ‘scratched’ the surface of the Olympics previously, so I was keen to get another healthy dose of them.

Tyler, John, and I made a plan to head out to Deer Park one Friday after work and give the ‘Grand Loop’ a try on Saturday. The ‘Grand Loop’, as it’s become know, can obviously be done clockwise or counterclockwise from two main parking areas: Deer Park or Obstruction Point. The major ‘points’ of the route are Deer Park, Obstruction Point, Grand Pass, Cameron Pass, Lost Pass, Graywolf Pass, Three Forks (in the order that I encountered them).

We opted to go for a counterclockwise route from Deer Park, starting before sunrise at 4:30 AM. This would give us sunrise over the Puget Sound up along the ridge from Deer Park to Obstruction Point; it also meant we’d be starting early enough to avoid the major heat of the day on the exposed climbs.

We started off slowly from Deer Park and meandered in the dark towards Obstruction Point. We kept it quite slow to start, knowing we had a lot of terrain ahead of us. We caught sunrise’s yellows, reds, and oranges and MAN was it pretty dang sweet!

We cruised along towards Obstruction Point, where I could a mandatory bathroom stop. I was quite thankful for the toilet! We reached Obstruction in about 1hr 45 mins going quite slowly (just as a time reference).

We kept on meandering along slowly from Obstruction Point towards the descent to Grand Lake, from where we’d climb up to Grand Pass. The morning was cool and there were no clouds in the sky…we were glad we’d started early!

On the climb up to Grand Pass, John mentioned he was thinking of branching off and exiting via Cameron Creek. He and his fiancee Sofia had plans to run the Wonderland the coming week, so he needed to keep fresh-ish legs. We ended up reaching Grand Pass in just over 3 hours (for time reference).

Tyler and I waved goodbye to John at Grand Pass and took the steep and pretty crumby descent down from Grand Pass towards Cameron Creek. It wasn’t really runnable so we tried our best at jog-walking. Once we got down to the branch with Cameron Creek the trail became a bit more runnable…just kind of rocky and rooty for a bit.

The climb up from Cameron Creek to Cameron Pass was HOT…we stopped at the lake and filled up water, a few times. Tyler mentioned he wasn’t feeling great and was low on sugar (oops). I told him I had an extra Gatorade packet I could lend him, but other than that I needed to keep the sugar I’d packed for myself. I could lend him an extra pair of headphones I’d packed for the death march up from Three Forks to Deer Park…that might help his zombie mode later??

We reached Cameron Pass around 4hrs 50 mins (for time reference). At Cameron Pass we agreed we might split up later in the day if our paces started to diverge. I had planned for a 12-14 hour day and wasn’t stocked well for more than that. We shuffled along the ups-and-downs from Cameron Pass to Lost Pass, where we would enter the ‘Dose’…what I feared would be the brushiest part of the route.

The Dosewallips has a reputation for being pretty bushy and burly…at least that’s how I had printed it in my mind. I feared it might not be very runnable and kind of dreaded the thought of walking all those river-grade miles in the heat of the day.

We reached Lost Pass around 5hrs 25 mins (for time reference) and began our descent down towards the ‘Dose’. It was brushy, but not that brushy…it started off pretty steep, but got pretty mellow…could it be runnable? Once we got to ‘Dose Meadows’ it was clear it would be runnable on-and-off again. There were sections here and there where the brush was chest deep and rocks were hidden, but then there would also be stretches where the running was good, cruisy, and fun! I was happy that it wasn’t as bad as I thought it would be. There were plenty of places to fill water too!

It was HOT though…amongst all that brush and now in the heat of the day. Tyler and I reached the base of the climb to Graywolf Pass in about 6hrs 30mins, the second-to-last major climb for the day.

Tyler said he was gonna split off from me and take it slow; I handed him the Gatorade packet, said ‘sorry for ditching ya man’, and headed off. I put in my headphones and began to listen to podcasts, hoping it’d distract me from the miles I still had left.

The climb up to Graywolf Pass was quite ‘dull’: you’re in trees almost the whole way and you can’t really see that much. I tried to just power through it and managed the climb in under an hour. I think if you’re really ‘feeling it’ this entire climb is runnable. The grade really isn’t all that steep.

I sat down at Graywolf Pass for about 15 minutes and ate some food, rested my legs, and enjoyed the last views I’d have for the day. From Graywolf Pass, I would have a 10 mile descent down to Three Forks, where I’d climb 3,300′ back up to Deer Park, where the day would be done. There wouldn’t be any more veiws and I’d have to just crank out the last 15 miles or so. There was a nice breeze and MAN did my salami and potato chips taste good at this point in the day when the salt was dried up from my sweat.

The descent down from Graywolf Pass had it’s good parts and bad parts…some spots were rocky, some parts were cruisy, and some parts had tons of blowdowns. For the most part it was pretty runnable; once I got past the ‘junction’ where the trail turns NE it was entirely runnable all the way to Three Forks. I tried to enjoy the music and podcasts I had and crank out the river grade miles. I was VERY glad I had chosen the CCW direction, as running down this at the end of the day was quite nice, as opposed to exposed heat on the ridgelines we had covered in the morning.

I reached Three Forks in 9hrs 28mins and rested for 10 mins or so. I filled water, ate a good helping of food, and prepared to crank out the final 3,300′ climb up to Deer Park. Again, similar to Graywolf Pass, the climb was not steep at all and definitely could have been runnable with fresh-er legs than I had. I powerhiked and tried to jog some sections but didn’t really have the motivation to redline at the end of the day. I wanted to beat 12 hrs total time but wasn’t that set on doing that. I ended up coming in at 12hrs 38mins which felt good and my body didn’t feel beaten up. I left Tyler some LaCroix on his car and headed home, prepared for the long drive back to North Bend.

I DEFINITELY recommend doing this loop CCW from Deer Park for a few reasons: