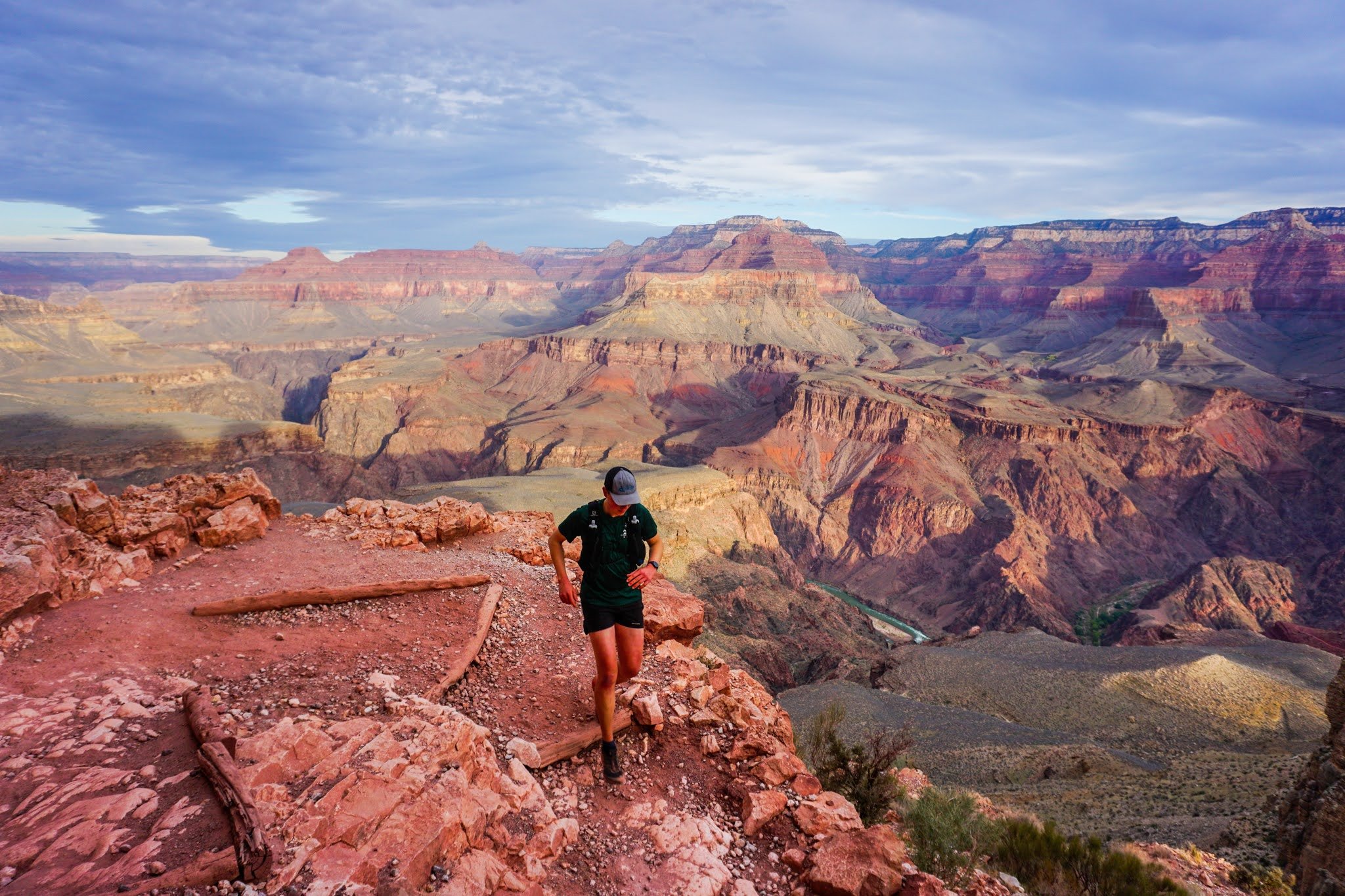 I hiked the Grand Canyon back in 2018 with my Dad as part of a longer hike I did across Utah and Arizona. Back then, I wasn’t a runner. I was a hiker and backpacker. In the last year of college and as I moved out West, trail running has grown into a huge passion of mine. I’ve found the flow of running on trails so peaceful and painful, a beautiful coexistence that feels much more sustainable to me than rock climbing or other highly vertical action sports.

As the rainy fall weather of the PNW began to set it, I had my sights on a trip out to the desert for some sunshine and Vitamin D. It was a wonderful coincidence that Blake and Daniel were going to be on a road trip out in the Desert West, so I booked a flight from Seattle to Las Vegas, where they would pick me up and drop me off. I would sneak this trip in a weekend as a mini-adventure, in between a busy working schedule.

I had mentioned the trip to Kyle as I picked him up from the airport, and he was stoked to join as well. We now had a squad!!

Running the Grand Canyon is often referred to as R2R or R2R2R. The most common starting point is the South Rim, as it is open year round and has more services (parking, campgrounds, grocery stores, etc.) than the North Rim. Around November 1 each year, access to the North Rim from Jacob Lake, AZ is closed to the general public.

For Rim-To-Rim-To-Rim (R2R2R), the statistics are:

Some people choose to descend via the Bright Angel Trail and climb back up via the South Kaibab Trail. There is a shuttle that runs between the two trailheads.

We chose to run the South Kaibab both ways for two main reasons:

We chose to start around sun-up, as we didn’t feel the need to start much earlier. We preferred to be climbing back up to the South Rim in the dark, rather than having dark on the descent down to the river. We anticipated it would take us 12-14 hours, so we knew that, given the time of year, we would be in the dark at some point during the day. By starting at sunlight, we would just have dark on one-end of the run…at the end.

The temperatures were predicted to be around 40 degrees at the rim in the morning, rising to around 80 degrees down in the canyon at the heat of the day. It would be hot, but not unbearably so.

The descent down the South Kaibab Trail started off steep and stayed that way…it was quite brutal on the body. The trail was firm underfoot and had many sections that were a pure staircase. Running down this was hard on the calves, especially, since they would absorb the impact first.

We took a few breaks on the descent at the rest stops; our time down to the runner was just under 1 hour, 20 minutes with a poop break mid-descent. Overall, we were moving smoothly, but our bodies were beaten down by the 5,000′ descent to start. I felt decent, but Kyle and Daniel, in particular, felt worked.

We stopped for a water break at the first water station across the river before Phantom Ranch, filling up our bottles. The next water stop would be 5-6 miles ahead at the Cottonwood Campground.

I began to feel in a flow state on the trail up towards Cottonwood; I left ahead of the rest of the crew, and to be honest, left them behind my accident. I just felt good…for the first time in a LONG time on a long run. Running along the river felt quite effortless. Granted, it was quite flat, but it still felt amazing to be flowing through the morning miles.

Blake caught up to me around 3 miles into the run from Phantom Ranch up towards the North Rim, and we found a good rhythm. At one point we turned around, hearing a runner ask to pass us, and there was Jim Walmsley! Jim holds the FKT for the R2R2R at 5 hours, 55 minutes. We felt starstruck! I fist bumped Jim and we kept on going.

Blake and I figured that Daniel and Kyle would be a bit behind us, but we chose to keep on moving and would wait for them at the North Rim. In hindsight, we should have waited for them earlier in the day, rather than later when everyone would be fatigued and want to keep moving, but we were eager to see how well we could move early on while our legs were fresh.

We kept cruising and filled water at Cottonwood and Manzanita, before the step climb up the North Kaibab switchbacks towards the North Rim. The switchbacks up the last 7 miles to the North Rim are awe inspiring, cut into sheer cliff sides and dropping hundreds of feet on one side. A fall here would be fatal.

Blake sped ahead on the climb up to the North Rim, but not more than 15 minutes or so. I reached the North Rim around 5 hours, 15 minutes into the day. Only to realize that the water was turned off. YIKES. Luckily, there was a decent crowd of people to grab water from. I ate a peanut butter and jelly sandwich (thanks Kyle!) and drank some water, and began my descent back down. I was fearful about my hip flexors, as on the Baker Lake 50k this year they had been giving me pain. I took an ibuprofen and hoped that I would be able to run the 14 miles back down to the river. From there it would be a grind back up the South Kaibab Trail to the car, but one that I could manage walking, even with an aching body.

I saw Kyle about 10 minutes into the descent. Daniel had turned around early into the day because of an abnormally elevated resting heart rate that concerned him; Kyle felt good, but was a bit upset that Blake and I had left him, and rightfully so. I felt guilty leaving Kyle and Daniel, and in the moment I didn’t apologize (and realize I should have). I was fearful that if I slowed my progress my body would begin to shut down, and wanted to keep the momentum I had. I said a brief “Hey” to Kyle and then began my descent down the North Kaibab back to the river.

I was AMAZED at how much the ibuprofen helped my body. I guess drugs do work? Lol…I don’t really mean that. My joints felt great and muscles felt like they had a second surge of energy after my brief rest at the North Rim. I flowed on the descent down the steep switchbacks. I took extreme care on the steep sections in the cliffside, where a clumsy fall would be REALLY bad.

I met up with Blake at the Cottonwood Campground, where he had been waiting for me. He asked if I thought we should wait for Kyle. I said, “Yes…but I am really afraid of losing my momentum right now. My body feels really good and I’m afraid that if I stop now my body will just shut down.” I was being honest, however guilty I might have felt. Blake opted to wait for Kyle at Cottonwood. Initially, I thought I would just keep on trucking all the way to the South Rim on my own, and wait for them at the end; but around halfway back to Phantom Ranch, I decided I’d wait for them at the river, since the ascent was just a walk at the end of the day. If my body did end up shutting down, I could manage to grind out a hike.

The late afternoon cruise along Cottonwood Creek felt flowy, although a bit more labored. 30+ miles into the day my body was starting to feel tired. I was still keeping a good running pace of 10-11 min/mile, but I could feel my energy and muscles beginning to go downhill, in particular my calves. The descent from early on in the day was BRUTAL.

I reached Phantom Ranch and dipped my feet into the creek. I waited about 45 minutes for Kyle and Blake before they arrived. I was really happy to see them; I apologized to Kyle, who seemed to be quite tired and feeling queasy. His stomach was not treating him well.

We opted to walk the rest of the climb back up to the South Rim, half of which was in the dark. We caught the sunset over the canyon as we climbed, which was truly magical. The Canyon looks like a painting that is just out of reach of your fingers; it’s quite a surreal feeling.

As the darkness set in, Kyle put on some tunes and we trucked on through the night towards the car. We sang songs and hiked on, through the pain cave to the end!

We finished the day in 12 hours, 20 minutes; we certainly could have gone faster, but the pace felt smooth and slow enough to take in the scenery.