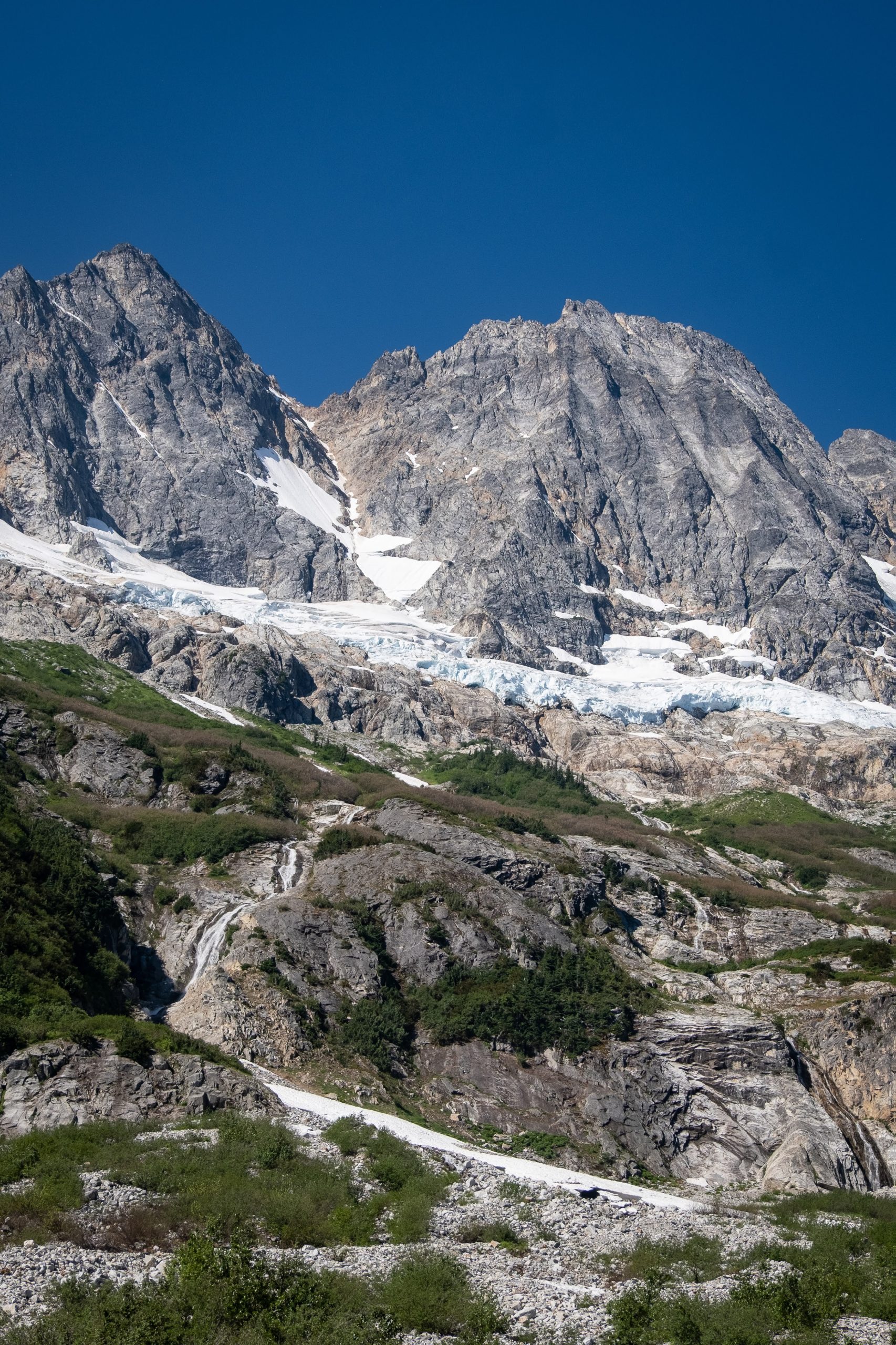 The year before, my friends Kyle and Steve climbed the Northeast Buttress of Goode Mountain and bivy-ed on the summit, and for months they could not stop talking about how “goode” the views were (get ready for the puns!). So naturally, once summer came again, Goode Mountain was on my list of trips to try and squeeze in.

Chris and I had climbed Denali together earlier in the year, so we had good chemistry and tons of stoke for getting out into the alpine together. My usual routine of trying to find partners began on Monday, and I messaged Chris asking if he was up for a big weekend in the alpine. I threw around a few other ideas, but Goode stuck out to Chris and I. It was forecast to be clear, low wind, and no smoke (hopefully). We only had 2 days, since Chris and I have full-time jobs, so we knew it was going to be a big weekend.

The approach in to Goode is long, no matter how you slice it. You can make less hiking by driving to Lake Chelan and taking the ferry to Stehekin, but that is one LONG drive, as well as a ferry ride. We opted to drive to Rainy Pass and sleep at Bridge Creek trailhead on Friday night and start around 4 AM on Saturday morning. We would aim to bivy on the summit Saturday night, which would mean a 12 mile approach to the base of the route, then climbing the entire route on Saturday. Sunday would be the descent down the SW Gully, followed by 20 miles of trail hike out along the PCT and Park Creek Trail (a.k.a. a “zombie walk” at that point).

We started out on the PCT headed downhill towards the North Fork campground. Earlier in the year, the bridge over Bridge Creek at the North Fork junction had washed out, but just a week or two earlier, trail crews had put in a new suspension bridge. Our timing was perfect! We wouldn’t need to cross the bridge at the start of the trip, but coming back out it would be a life saver. The ford is doable-ish, but it’s a big river.

Once past Grizzly Creek, we hiked another 1.5 miles towards talus fields at the base of Goode Mountain; at the point where we turned off, the trail nears the creek and makes for an easy crossing to the base of the mountain. I wouldn’t even really call it bushwhacking, as it involved pushing through maybe 30 feet of some alder. For the Cascades, that is hardly anything at all.

By this point we had hiked 12-ish miles, but barely gained any elevation at all. We made the ford across the creek, which was about knee deep and ice cold.

We took a quick water break and prepared to start gaining vert. We knew to head towards a waterfall on looker’s right; the slabs on climber’s right of the waterfall were Class 3 and gave passage to a tunnel of alder to talus slopes above.

Overall, the route is not bushy at all, when taking this direct approach. Beckey, in his Cascade Alpine Guide, describes a more circuitous variant that climbs higher up the valley, then winds back towards the Goode Glacier. I don’t see any need for that, as the slabs to the right of the waterfall, as well as the rock above that leads to the Goode Glacier, are pretty simple terrain. Additionally, there are good campsites around 5,400′ below the Goode Glacier for those looking to split up the approach and the climb.

We reached the slabs and had some fun scrambling; the scrambling was fun and easy, but with wet rock would be downright scary and miserable.

Once on top of the slabs, we entered ‘The Tunnel of Butterflies’; I swear, I had never experienced such a dense population of caterpillars IN MY LIFE. It was wild, pushing through the alder and having dozens of caterpillars fall onto your garments.

We brought light hiking crampons and an ice axe each; we chose not to rope up on the glacier, mostly because we felt that the crevasses were quite open and noticeable. That said, your risk tolerance may vary.

The “crux” of the entire route is often transitioning from the Goode Glacier onto the actual Northeast Buttress. There is often a considerable moat that requires either a jump, downclimb, or rappel and then climb back up. Later in the year, the moat can widen and become impassable. We didn’t have a great sense of where most people cross the moat, as the GPX tracks we found bounced around all over the place due to interference; that, and GPS is only so accurate, and not very useful for micro-features, in my opinion. We aimed for around 6,800′, where the glacier starts to gain in steepness and logically it just made sense to try and traverse onto rock.

I found a collapsed snow bridge that had some gaps in it, but overall provided a relatively nice ramp onto the rock. I had to traverse a ledge system that probably was Class 4, but overall the transition onto the Northeast Buttress wasn’t ‘horrible.’ Chris was able to find a much easier passage a little ways down from where I crossed.

I will admit, crossing on collapsed snow bridges is a VERY sketchy endeavor. The snow was still relatively firm in the early afternoon, but the sun had plenty of time to warm them up. If Chris had tripped and dynamically weighted any of them…not good.

Once we transitioned onto the buttress itself, we roped up and got out our rack of cams and nuts. Our gear for the route consisted of:

We intended to simul-climb the entire route, as it was mostly 4th and low 5th class terrain. We started up towards the ridge crest from where we gained the glacier. Unfortunately, at this point I put away my camera, so instead of photos of the route I will try to summarize the route in bullet point form:

1. From where you transition onto the buttress from the glacier, climb up and trend towards climbers right to gain the ridge crest. Once on the ridge crest, remain just to climber’s left. There is a long, approximately 700′ section of mostly Class 4 scrambling that will go fast. There are portions with loose rock, so be very cognizant of rockfall. Otherwise, the climbing is fast, relatively secure, and as mentioned, not very technical.

2. After around 600′-700′ of Class 3-4 scrambling, with a few Class 5 moves mixed in, get back onto the ridge crest. You will follow the ridge from about 7,800′ to 8,200′ where the ridge will start to steepen. At this point, shift over slightly to climber’s right, where a gully system appears and allows for easier travel. Again, there is loose rock, so be vary of those below you.

3. Once you are through the gully system, you will come to the “amphitheater”, a large bivy ledge that has two camp spots. We took a nice break at this spot and ate some food and drank some water.

NOTE: There is likely to be NO WATER on route. You may get lucky and find a trickle from a lingering snow patch, depending on the time of year you go. We did not.

4. From the amphitheater, you can take one of two “arretes” to the final summit ridge. We opted to take the one on climber’s left, which features a few exposed 5.5 moves. The route is well-protectable; there are just a few moves on the ridge itself that are pretty exposed.

You will spot a cairn that denotes the Black Tooth Notch on your climb up; note its position, as you will have to rappel down to this cairn on your descent.

5. Either arrete will start pushing you back to climber’s right to the final summit ridge, which is much less steep than most of the climbing on the route. For the most part, it is Class 4 terrain.

We reached the summit after a 16 hour day; we were not going fast, by any means, but we were very happy to have some sunlight left. We had passed one party on route that had been pitching out the entire climb; they planned to camp down at the amphitheater bivy sites. We would have the summit to ourselves! Good thing too, as there were only two bivy spots. Just enough for each of us!

The summit register had recently been swapped out, so were sad to miss out on a history lesson of those who had been there before us. Dang!

We took in the alpenglow after a long day of hiking and climbing. MMMMM….it was so gorgeous!

The night was slightly windy, but overall not too bad. It kept the mosquitoes away! We woke at 5 AM to a sunrise that was just truly spectacular.

We packed up and began the rappels down to Black Tooth Notch. The rappels are traverse-y, to say the least. I’ll again summarize the routes notes for the descent in bullet form:

Once out of the gully, descend to the heather benches below and start trending back to skier’s right where possible. You will need to get below a series of waterfalls before you are in a burn zone that will take you down to the trail below.

The heather meadows were magnificent; we filled up on water and prepared for the long, HOT hike out. We found the old climbers trail along the ridgeline in the burn zone, which made travel through all the blowdowns much faster.

We reached the Park Creek Trail, filled up on water, put on sunscreen, and began the zombie walk out. 20 miles of pretty much flat trail…after such an epic climb…yay. It was hot, but we managed to keep conversation going which kept out minds off our feet, at least for a little bit.

We had 3 bear encounters on our way out, but none of them were particularly interested in messing with us. From the Park Creek Trail, it was about 6 hours of continuous hiking down and out. I reached the car at 7:30 PM; Chris at 8:15 PM. All in all, one damn GOODE weekend!