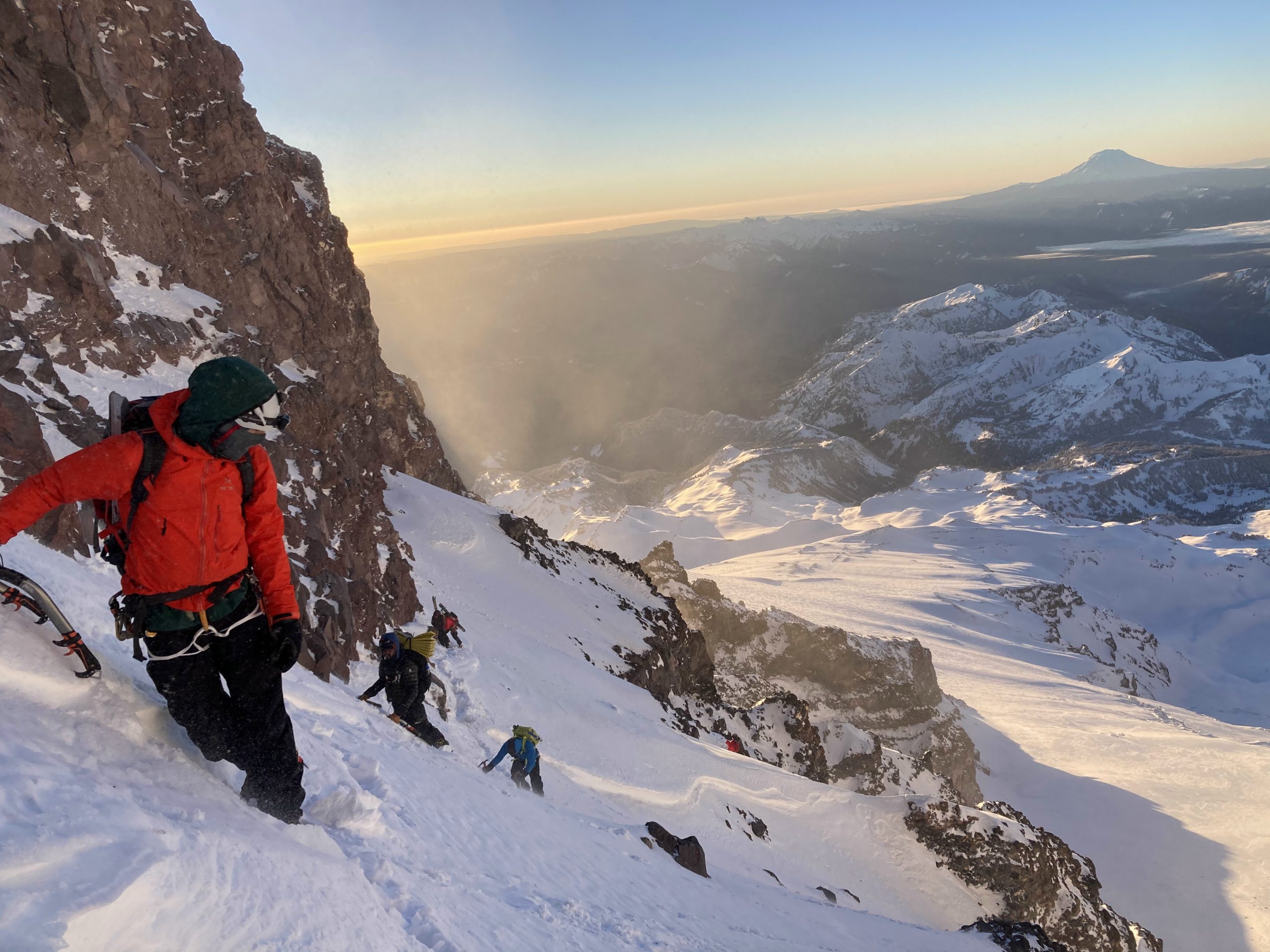 High pressure had lifted over Washington for almost a week…in January! Or should I say…June-uary. A Pineapple Express rain event had all but destroyed the good snow we had, turning powder into ice and rain crust. The upside was that alpine faces were stabilized…the downside was that they were likely firm, either windboard or ice.

Looking at this extended high pressure window, my focus immediately turned to more typical “spring” objectives…large alpine faces, volcanoes, etc. I wanted to take advantage of the stability for adventure; “good” skiing was going to be hard to find, but “adventurous” skiing would be the special of the day.

As I skied down Dirtyface Mountain on breakable crust, my mind wandered; hmm…what about Rainier…in WINTER? I was intrigued. I had done Rainier twice before, in summer, once via the Emmons-Winthrop and once via the Disappointment Cleaver. Both times, though, I had booted up and down. Last season I had wanted to try and ski the Fuhrer Finger but got injured before I had the opportunity.

I started diving into weather, conditions, and a window appeared to be forming. A very mild snowstorm was forecast to hit Rainier on Thursday night, leaving a few inches of dust on crust before high pressure returned Friday-Saturday night. A storm did appear to be entering the region Sunday morning, which made me pause and think about the “buffer” room of the weather window.

Ultimately, I put together a plan and messaged my friends Evan (a climber in Portland, OR), Anthony, and Will. Anthony, Will, and I planned to bring skis to the summit and hoped that solar radiation would soften up the upper faces enough. At the worst, we’d have extra weight on our backs as we booted down the mountain.

I chose to skin up to Camp Muir on Friday afternoon, instead of staying with Will and Anthony in the Paradise parking lot, primarily because I wanted to train myself for carrying a heavy pack for my plans of Denali later in this year. In all honesty, looking back now I wish I had just done a single-push with Will and Anthony…carrying a heavy pack sucks.

Our plan was to climb the Gibraltar Ledges route, which in winter is the most direct route up Mt. Rainier. Evan and his climbing partners planned to hike up to Camp Muir in the early afternoon, and I would meet them around 4-5 PM after getting off work on Friday. Will and Anthony planned to sleep in the parking lot down at Paradise, and would meet up with us around 4:30 AM on Saturday morning.

I loaded up my pack with overnight gear and began the slog up to Camp Muir around 12:30 PM. There were still some hanging clouds on the mountain, but quickly enough the sun poked out and bluebird skies lifted for the day.

I lazily made my way up the Muir snowfield…VERY lazily stopping for pictures and checking out the surroundings. I made it up in 3 hours 45 minutes, which felt like a snail’s pace.

On my way up the snowfield I got eyes on the Gibraltar Ledges and took some zoom pics. It was nice to see the route in the daylight, as opposed to by headlamp for the first time.

The Muir snowfield, or rather Muir ICEfield, was a mixed bag. It was clearly wind affected, with portions of pure rain ice and portions of summer corn, intermixed with wind-blown sastrugi. Interesting. I snapped a few pictures of a skier coming down, with mother Tahoma looming large.

Okay, okay…enough about the slog up Muir. Get to the trip report already! I know…just wanted to sneak in a few pictures…lol.

The Gibraltar Ledges route starts from Camp Muir and ascends the upper Cowlitz Glacier towards the Cowlitz Cleaver. The “crux” of the route is the ledge system, which gives the route its name of the “Gibraltar Ledges”. The ledges extend along the southern flank of Gibraltar Rock and give way to the Gibraltar Chute, a 50 degree snow slope that connects with the Nisqually Glacier. The route pops onto glaciers again at Camp Comfort, i.e. the top of Gibraltar Rock. From this point, one has many options of how to ascend to the summit…either staying to climber’s left and ascending the Nisqually Glacier, or veering to climber’s right towards the Ingraham Glacier. Descent options vary, either re-tracing one’s steps down the ledges (I wouldn’t advise) or descending the Ingraham Glacier via the Direct Route (not the Disappointment Cleaver).

Will and Anthony met me at Camp Muir at 4:30 AM and we started out at 5 AM, just behind Evan and his crew. There was another pair of climbers heading up the Gib Ledges as well. I’ve learned its strategic to be slow in the morning…let the others set the bootpack 😉

From Camp Muir, the upper Cowlitz is a straightforward snow climb to the start of the ledges. In the dark it can be tricky finding the entrance to the ledges, but the key is to stay as close as possible to Gibraltar Rock (climber’s right). If you veer too far left, you will feel “cliffed out” on the Cowlitz Cleaver.

There were portions of rime ice on the snow climb up to the ledges, for which I used two Petzl Gully axes in low-dagger position. Nothing worth roping up for, but I went a bit slower than I had hoped for.

Once we reached the ledges, Anthony set an awesome bootpack for the rest of the crew. I got spooked out on one particular move than involved some mixed rock, but other than it was pretty straightforward. Later in the season this traverse would SUCK. Underneath the snow it is CHOSS for days. There is a reason this is a winter route, for sure.

The ledges dump out onto the Nisqually, and the conditions were prime for a booter. We took a break at Camp Comfort, eating and drinking before roping up for the upper glacier.

At Camp Comfort, Anthony, Will, and I roped up and began booting up the Nisqually Glacier. We chose a very direct line up the glacier; there is a serac that many other climbers have referenced in trip reports. We climbed to climber’s left of that serac; there were only 3 or 4 crevasses we had to cross, and all were bridged at some point.

It was WINDY at times, blowing 20+ mph, only worsening the cold temperatures. The summit was forecast to be 0F with a wind chill of -25 F. I’d believe it. The cold was the toughest part of the day, as the climbing conditions and visibility were PRIME. Will, Anthony, and I made it up to the summit around 12 PM, 7 hours from Camp Muir, which was MUCH slower than we had thought but still within a comfortable time frame. Evan and his climbing partners, as well as the other party that had started out ahead of us, had turned around just above Camp Comfort around 11 AM; they ended up descending the ledges and returned to Camp Muir, safe and sound.

Anthony and I traded off leading on the rope team, with Will sandwiched in the middle. I started off the day slowly but felt a second wind later in the day; either that, or Will and Anthony started to slow down a bit (LOL). Anthony and Will are some of the strongest climbers I know, and keeping up with them is always a challenge (that I often fail at, but still try with dignity).

As we climbed up the Nisqually towards the summit crater, we encountered mostly firm, chalky windboard mixed with portions of softer sastrugi snow. Overall, the conditions were aligning for our ski descent. It wouldn’t be GOOD skiing, but it would be skiing. It was too cold for corn to form, sadly; I had thought that the solar radiation would have been enough, but the temperatures were too cold.

We traversed across the summit crater and snapped a SINGLE picture on the summit. I brought my camera in my pack but did not get it out once. It was just too darn cold.

We tried to find a snow cave near the summit to warm in, but to no avail. We clicked into our skis and began to scrape down the rime-infested summit crater towards the top of the Ingraham Glacier. Our plan was to ski the Ingraham Glacier along what is called the “Ingraham Direct” route. The route is further to the north (skier’s right) than the ascent route from Camp Comfort we had taken. It uses the Disappointment Cleaver as a landmark. The goal is to ski between Gibraltar Rock and the DC, tending more towards the DC, as the upper Ingraham Glacier can be a maze of crevasses and seracs.

I chose to ski with an axe in hand, as opposed to a Whippet, which Anthony and Will donned. The underfoot conditions were FIRM…chalky windboard most of the time with interspersed sastrugi. For almost all of the descent, we either jump turned or scraped down at times.

The most challenging part of the ski down was navigating crevasses…a lot of them. The upper Ingraham Glacier was still very broken up. There was never a point where we had to take off skis, but we certainly had to weave in and out of crevasse fields. Anthony did an AMAZING job of leading the way, as Will and I followed his tracks through the crevasses. It was most DEFINITELY adventure skiing.

Our one “goof” of the day was navigating to the exit of the Ingraham Glacier towards Camp Muir. In the summer, the route favors Cathedral Gap; we paused near Cadaver Gap, a steeper pitch than Cathedral Gap, and ultimately chose to continue skiing down the Ingraham Glacier to try and find Cathedral Gap. Sadly, around 10,100′ we realized we missed it. Anthony did a great job of pausing us and helping us realize this before we went too far down. It was definitely painful, though, to boot back up around 1,000′ to Cadaver Gap. Better safe than sorry, though.

We ultimately returned to Cadaver Gap and skied that down to Camp Muir. There was a small little traverse into the gully, but overall it was the best skiing of the day.

I quickly gathered my things at Camp Muir, and Will, Anthony, and I skied down the Muir ICEfield back towards Paradise. There were, again, sections of BULLET ice mixed with softer snow until around 7,500′. After that point it got softer and more consistent. Clouds started to roll in around Panorama Point, but we got down and out to the cars safe and sound around 4 PM. Out the gate before dark!