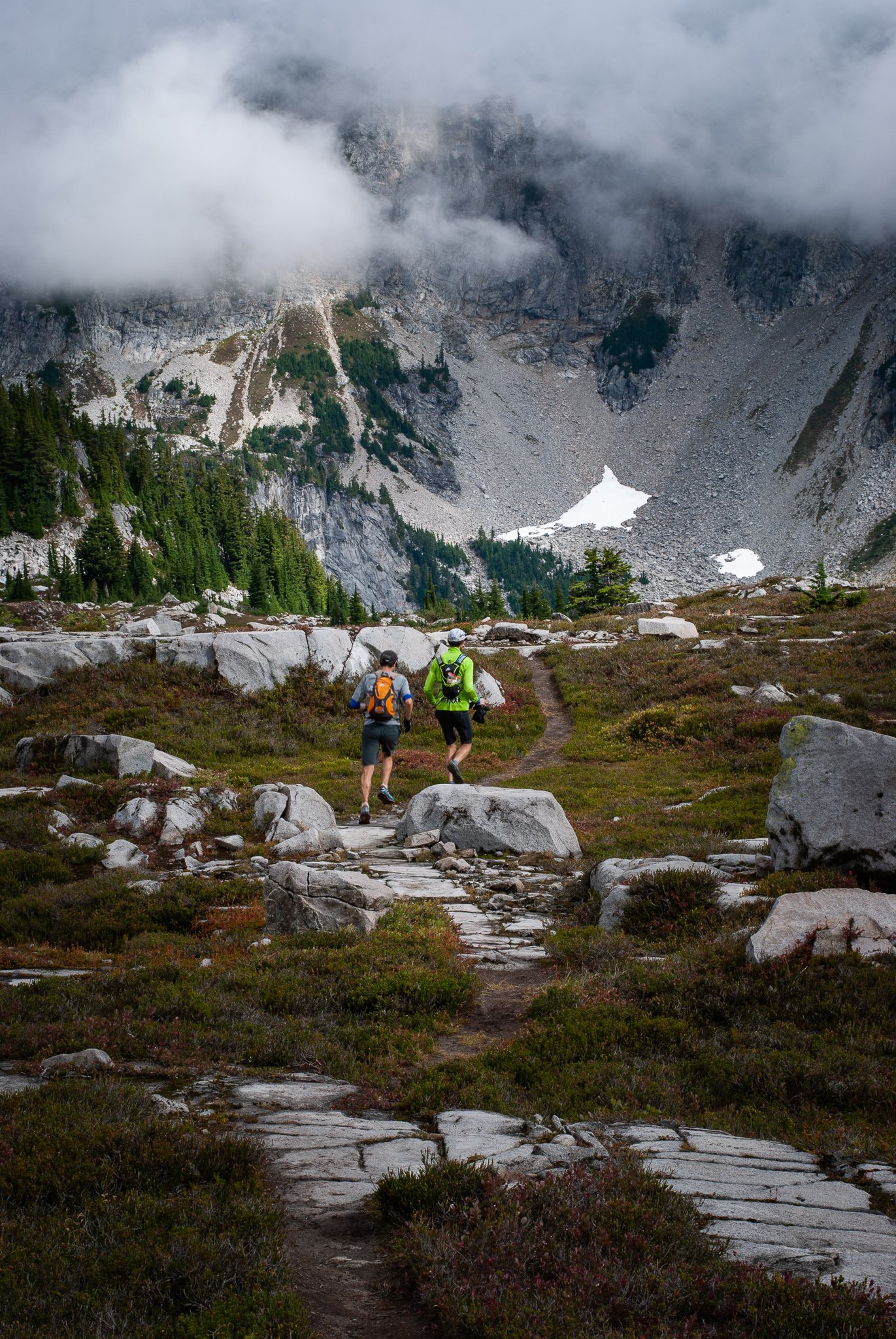 My co-worker Zach had messaged me about a loop he wanted to do from the Foss Lakes trailhead to the Necklace Valley trailhead. I had heard of the loop before, referred to as the “Alpine Lakes High Route.” The loop has a ~6 mile off trail section, but for the most part is on trail. The “high route” section is along the Iron Cap ridgeline; my friend Kyle had done a variant of the high traverse, extending it from Big Snow to La Bohn.

Late summer was turning to Fall, and the days were starting to get shorter and cloudier. Weather looked marginal, at best, but still acceptable. Zach invited his friend Glenn and we headed out to give it a shot.

We got a late start by my standards, arriving to the trailhead around 8 AM. I anticipated it would take us 10-11 hours, given the vertical gain of ~8,500′ and mileage of ~25 miles.

The trail from W Fork Foss starts out reasonably flat before climbing up from Trout Lake towards Lake Malachite and Copper Lake. The morning was a bit wet and VERY humid, but the temperature was cool enough to be pleasant. The cloud cover helped as well. We walked most of the switchbacks up to Copper Lake, before getting back into more of a jog.

We found a good rhythm going around Copper Lake to Little Heart Lake, with ups and downs along the lakeshore. We were in-and-out of cloud cover for the most part, so the views were sporadic at best. The trail was getting a bit rockier, but still very runnable.

Past Big Heart Lake, the trail climbs steeply up to Atrium Peak, and then descends steeply down towards Chetwoot Lake. This section wasn’t very runnable and was clearly less travelled than the well-worn trail earlier on closer to the trailhead. Guess most people stop at Copper Lake…

At Chetwoot Lake we filled up some water and headed up the talus fields towards Iron Cap Mountain. Given the conditions of thick clouds and strong winds, we opted to take the low variation around Iron Cap through the Iron Cap Lake basin, rather than climbing up to the summit ridge of Iron Cap. The rocks were somewhat slick with moisture, so we wanted to avoid the long descents on slab on the summit ridge.

We passed a handful of backpackers who were hiking the route we were running; they were certainly confused seeing a few runners with tiny little running vests. Where were our tents and sleeping bags?? Uh…back at home.

The off-trail section between Iron Cap Lake and the Tank Lakes requires a bit of scrambling and route-finding. For those experienced with off-trail travel, it’s nothing more than a few moves of Class 3 and minor bushwhacking. I led the way, as Zach and Glenn are mostly road runners. We moved slowly across the boulder fields, around 1-1.5 miles per hour, but found our way without much trouble. There are plenty of cairns to guide the way.

The Tank Lakes were a highlight of the route, high alpine lakes sprinkled with rocks, creating an amazing aura. I would love to return with some more visibility and maybe spend a night up there. The clouds did provide a cool mood, though.

We descended down towards the Necklace Valley from the Tank Lakes through some boulders and along old moraine drainages. The post-glacial terrain was a bit too rough to run continuously, at least for me, but there was jogging mixed in amongst fast-walking.

Once we hit the valley floor we found the Necklace Valley trail and began our run, descending down to the trailhead. There were some sections that were steep and filled with roots, which I opted to walk instead of try to run inefficiently. Overall, though, the descent was pretty enjoyable.

Glenn opted to run ahead of Zach and I to go and get the car; Zach and I were PERFECTLY fine with stopping our run at the Necklace Valley trailhead and having Glenn come to pick us up!

We finished the route in 10.5 hours, right on schedule. The light was beginning to fade as we rolled into the Necklace Valley parking lot, so we were very glad to not pull out our headlamps.

Overall, this route is a great loop, with tons of more off-trail potential!