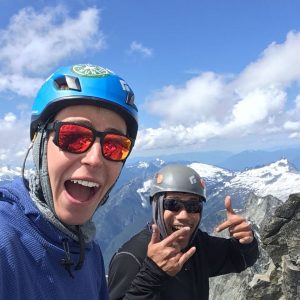 This trip was part of a month-long stint I spent in the Cascades, bouncing from trip-to-trip. Kyle Rabago-Banjo, a friend of mine from Georgia Tech, had flown in for a long weekend from San Francisco. We had just finished the W Couloir of Dragontail Peak the day before in the Enchantments.

Banjo and I sat in a Safeway cafe in Leavenworth, WA, just off of Dragontail Peak. It was around noon, and we ate chicken from the hot bar. Quite the imagery, I know.

We had 2 days left before Banjo would have to leave and I would have to meet up with another pair of friends in Marblemount to begin the Ptarmigan Traverse. Hmm….what ideas could we come up with in this grocery store?!?!

The West Ridge of Forbidden Peak is a classic route in the North Cascades. A low fifth-class rock scramble along a beautifully exposed ridgeline, it combines alpinism with classic Cascadian bushwhacking. From reading trip reports, we were intrigued. It seemed quite the adventure! We looked at our watches…hmm…it was around noon. Could we make it to the trailhead and hike to Boston Basin tonight? Then we could climb Forbidden tomorrow…and then we could bag the East Ridge of Eldorado the day after, right next to Forbidden along Cascade River Road??

However ridiculous this may sound now as I am writing this, almost a year later, it sounded like a plan to us! We quickly scarfed down the remainder of our chicken and hit the road.

We arrived at the Boston Basin trailhead by 6 PM or so. It was 4 miles and 3,500′ up to Boston Basin from the trailhead. We figured we could make that by sunset, which was scheduled for 9 PM.

We exploded our gear behind the trunk of the car: climbing gear, ropes, a tent, sleeping bags, it began to pile up. Before we knew it, my 50L pack was overflowing, and so was Banjo’s 60L. Uhhhh…this was becoming a bit of a different trip than we had thought, not quite the “fast and light” run up and run down we had envisioned in our minds. Right on queue, rain began to trickle down as well…HA!

By 7 PM we were up moving through the bush of the Boston Basin climber’s trail. The trailhead sign that posted “This is an unmaintained climber’s trail” was right…it was only cut back by those hiking it. With rain falling more heavily now, we were thoroughly soaked by the overhanging bushes and shrubs, which now hung closer to the trail, heavy with rain. The trail turned to mud in many places, and somehow this casual 4 mile jaunt became anything but that. We both had done plenty of difficult adventures, but for some reason this was seemingly more than we had anticipated. Not dangerous, just way more difficult, mostly mentally.

By 9 PM we were still beneath treeline, around 4,800′ when treeline began to clear higher above at 5,400′ or so. We looked one another…I was SOAKED…Banjo was dripping wet…his pack was water logged…and the 70m he was carrying looked like dreadlocks fresh out of the shower. Campspot?!? Well…any GOOD camp spot would be much higher above, in Boston Basin around 6,400′. That was a good ways away. We trudged on for a few more minutes, with headlamps now on, until we hit a flat-ish spot ON the trail. Simultaneously, we looked at one another…the same thought in mind. CAMP.

Was this the best practice of “Leave No Trace,” of dispersed camping…ABSOLUTELY not. But given the circumstances, we did our best. We pulled SLIGHTLY off the trail, maybe a few inches or so, and put up our tent. As soon as we shoved ourselves in, our faces lit up with happiness. AHHHH. We were soaking wet, but at least we had shelter now. We stripped off our wet clothes and hung them up in the tent. Kyle got the JetBoil lit and boiling water for mashed potatoes. Wow did those taste good.

We realized that our plans for the trip were going to have to change. Not making it up to Boston Basin that night was going to delay our climb of Forbidden. We were not going to get up to Boston Basin early enough to safely attempt to cross the glacier and climb the ridge the next day. We would have to either:

We chose the latter, feeling that we had already done some of the work so we may as well continue. We would hike up towards Boston Basin the next day, set up a basecamp, rest and nap, and then attempt to climb the ridge the next day.

We woke up to the sound of footsteps…we were sleeping on the trail after all. Groggy, dazed, and a bit confused, we were slow in the morning. The humidity of the forest kept ALL of our equipment soaked and saturated. LOVELY…

We packed up our bags and continued on up towards Boston Basin, finishing the approach we had started the night before. Within an hour or so we broke through the bushline into the alpine zone, and our jaws began to drop. WOW…now this is what we came for. We could see Boston Basin above, the Cascade River valley beneath us, and the North Cascades expanding into view.

Once through the bushline, the approach to Boston Basin changes character significantly, changing from a brushy, steep climber’s trail into an alpine, low-tundra scramble. We followed the cairns across a few stream crossings and the footprints through some lingering patches of snow to reach Boston Basin. The camping area was clear from bivy spots assembled by climbers over the years. We chose a platform with a nice view over the valley and set out our clothes to dry in the wind.

We reached Boston Basin mid-morning and spent the rest of the day gazing out and admiring the scenery. Since we were not attempting Forbidden that day, there wasn’t much else to do other than take it all in. We saw a few climbers descend from Forbidden late in the evening, but other than that we had the basin to ourselves. How rare!

The climb itself was probably one of the most straightforward parts of the trip. There is a TON of beta on the internet about the route, but I will summarize VERY quickly:

The ridge was AMAZING. Super airy and exposed. Banjo and I simul-climbed most of the way; I led one pitch and he led a few others.

On top, we snapped a few pics and then headed back down we could see some clouds starting to roll in.

The day took a right turn once we were back down at the notch. A strong storm was overhead, with thunder and lighting, rare for the Cascades. We quickly rapelled down the gully, but not before getting hailed on. Back on the glacier, we ran, still roped up, back to the tent. It was messy.

This photo sums it up pretty well.

We opted to sleep the night in Boston Basin, rather than descend in the storm. Soo…3.5 days with 2 days of food. We were hungry to say the least.