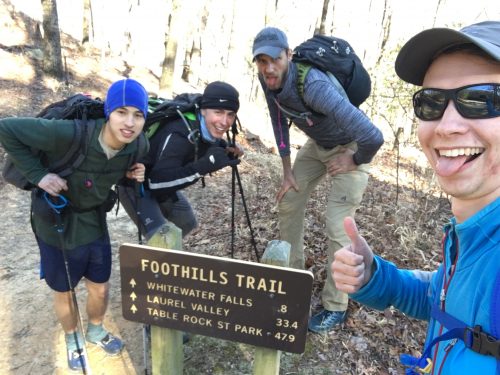 The Foothills trail is a 75 mile point-to-point hiking trail that runs along the North Carolina/ South Carolina/ Georgia border from Oconee State Park to Table Rock State Park in South Carolina. It is relatively flat, having only 10000′ of elevation gain across its entire length. Being relatively convenient to Atlanta, it’s a frequent destination of ORGT (Outdoor Recreation Georgia Tech) trips. This meant that we were fairly familiar with it and it was only a matter of time before someone proposed trying to do the whole thing in a weekend, which finally happened in March 2018. After we collected a group of people, this morphed into doing the entire trail in a day. It ended up being Colin, Mitchell, Eric, and I.

We planned to set a shuttle at Table Rock State Park and drop a resupply box at Horse Pasture Road Friday night, and camp at Oconee State park in order to get started on the trail around 4AM Saturday Morning. The night was frigid, below freezing, and we slept out in sleeping bags near the cars.

We started around 4 AM, beginning at a fast walk/low jog. The full moon kept plenty of light for us to not use headlamps.

Every 5-10 miles or so, there would be a road crossing or trail crossing, and we’d get one of the signs above. It would keep us motivated to keep going.

In all honestly, I wasn’t even a runner at this point…I did NO training whatsoever in terms of running. I biked, rowed, lifted weights, and did the StairMaster like a hamster…but running, not at all.

Around 26 miles into the day, Colin and Mitchell decided to bail. Colin was dealing with an ankle injury and Mitchell was already blistering and not feeling well. They would hitch back to our car parked in Oconee State Park and wait for Eric and I at Laurel Valley, where they’d resupply us for the final climb up and over Mount Sasafrass (or so we thought).

Our experiences diverged at this point. Colin and Mitchell shared pictures drinking beer by the car. Eric and I death marched through the night up until the point we started to cramp and crashed on the side of the trail, 56 miles in. We inReached Colin and Mitchell and told them to meet us at a nearby trail junction. Exhausted, Eric and I posed for this picture.

We stopped at IHOP for some breakfast, then I crashed on the car ride home.