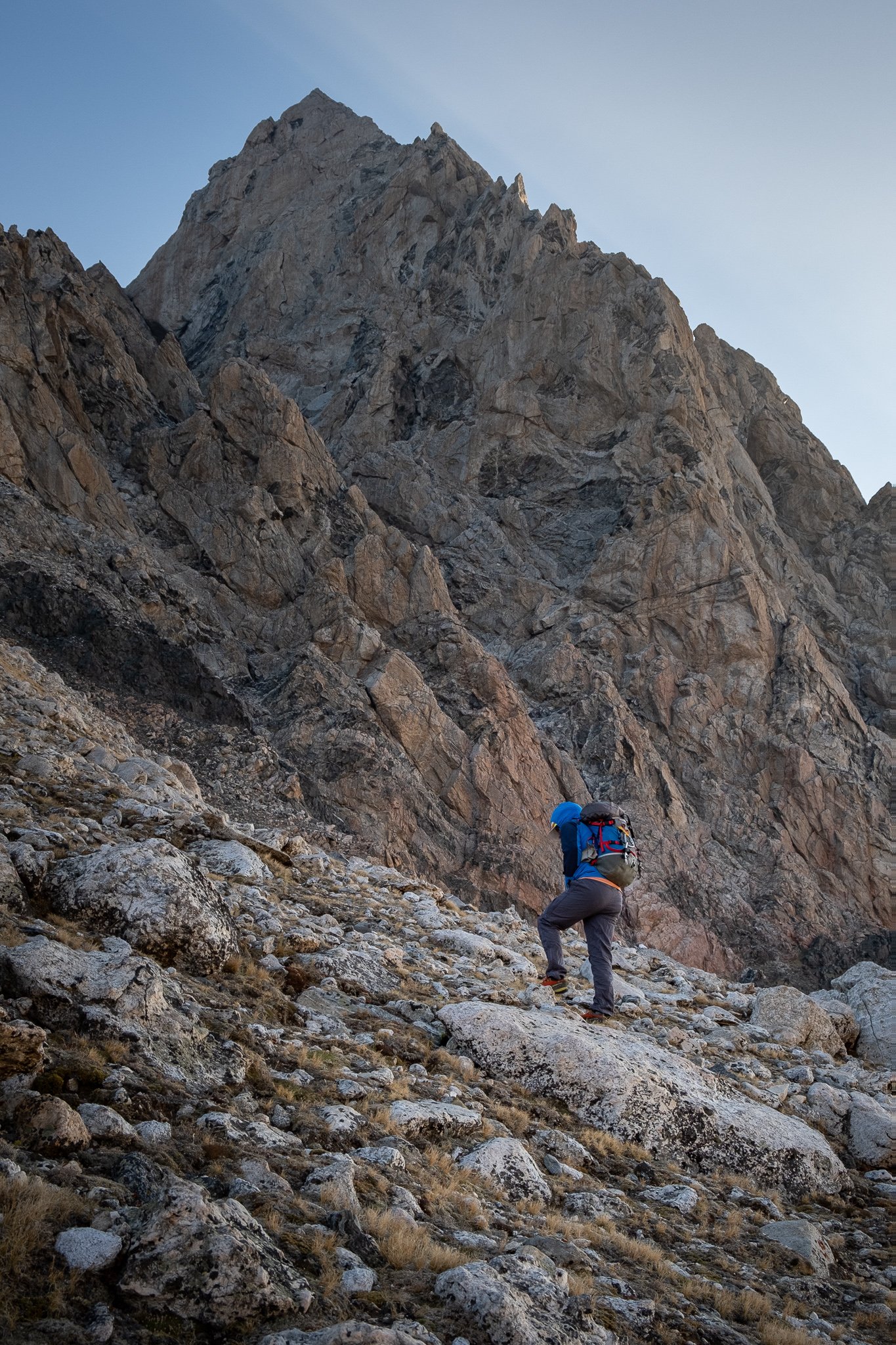 It’s hard to write about failures in the same way as successes, but in my opinion the failures are more constructive and more important to unpack.

For Labor Day 2021, my friend Isaiah Janzen and I planned to meet up in the Tetons and try to climb the Full Exum Ridge on the Grand Teton. Isaiah and I met while on Denali and instantly got along well together. We’re both mellow, soft spoken, and generally just enjoy the exploration that comes with mountain adventures.

The Grand Teton has inspired me for the last 3 years after first seeing it in October of 2019 when I came out with friends from college to hike the Teton Crest Trail. Its vertical prominence is striking from the Teton Valley, poking straight up from the earth below. One day I had to climb it…and I hoped this would be the trip.

I flew into Jackson the Friday of Labor Day weekend, desperately needing a weekend of unplugging from work and stressors of life. Isaiah drove up from Denver and met me at the airport, and we had the afternoon Friday to pack, plan, and gather our thoughts for the next day.

Our plan was to try and climb the Full Exum Ridge in a single-push from the Lupine Meadows trailhead on Saturday morning. We’d plan to start around 3:30 AM and get on route around 8 AM. We knew that crowds would be the biggest issue on a holiday weekend, but we hoped that our early start and fast-enough pace would keep us out of the major traffic jams.

In terms of gear, we planned to bring a single rack of cams from 0.3-3, doubling up in sizes 0.4-1, with an additional selection of nuts. We brought a 7.7 70m rope that we would double over while climbing. Our plan was to simul-climb as many pitches as we could to keep our movement efficient. The Exum Ridge is long; the Lower Exum is 6 pitches of 5.5-5.7 climbing, while the Upper Exum is 6 pitches of low 5th-5.5 climbing.

We knew speed was critical; moving in a single push would mean we would have minimal bivy gear, just enough for an unplanned night out. It was forecast to be COLD, with overnight lows just below freezing around 28 degrees. That, coupled with a 10-15 mph wind, would mean that we would be COLD in the first pitches of the Lower Exum route. The Lower Exum starts in the shadows of the Petzoldt Ridge; you don’t really get any sun until the top of the 1st pitch.

We made it to the Lower Saddle from the parking lot in 3 hours 40 minutes, not blazing fast but not horribly slow either. We were able to easily find the black dyke in the morning sun and found the 4th class ramp to the start of the climb without much trouble.

As we turned the corner on the ramp, however, we found that there were 4 parties ahead of us, a total of 9 people in the chimney. Immediately, our day began to take a turn.

Looking back now, we should have bailed before wasting any time waiting at the first pitch belay. If we had turned around at 8 AM upon reaching the first pitch, we would have still had time to climb the Owen-Spalding or the Upper Exum. Instead, we opted to wait for the other parties to start climbing and hoped that we could simul-climb the route fast enough to still climb the route.

We waited for 1.5-2 hours in the brutal cold on the first pitch belay. I’ve been to some VERY cold places, such as Denali, but this was some of the most brutal cold I’ve ever experienced. Standing in the shade getting blasted by the wind, I began shivering pretty violently and lost feeling in my hands for a bit. I had on EVERY ounce of clothing I had packed: a puffy jacket, synthetic layer, base layer, and wind jacket. Still, I couldn’t thermo-regulate.

Isaiah took the first lead up the chockstone chimney, which with nearly frozen hands felt MUCH harder than 5.6. With backpacks on, we got stuck for a second pushing through the chimney, which wasn’t the best feeling in the world. There was sun at the top of the first pitch, so I was eager to get up to that as fast as humanly possible.

Completely frozen, I began climbing once Isaiah topped out the first pitch. As I made my way up the chimney, my hands started to warm, but as soon as I got to the chockstone I got the “screaming barfies” (nausea caused from blood returning to cold hands). Hanging on the rope for nearly 10 minutes, I was in agony. I managed to find the strength to pull the move over the chockstone and continue up the chimney, but it was NOT elegant at all. Not a great start to the climb.

I took a rest in the sun as I got to Isaiah at the top of the first pitch, and then we continued on simul-climbing through the easier second pitch. As we turned the corner on the second pitch, yet again we saw the traffic jam of three groups ahead of us. Not a good sign…

It was my turn to lead, right in time for the 5.7 hand crack that leads to the Black Face. I am not a good crack climber, and this past year with COVID and other stressors in my work-life balance, I have not spent any time practicing my climbing skills. I placed three cams in the hand crack before turning around and saying to Isaiah, “I don’t think this is a good idea for me.” I didn’t feel I was going to fall at the moment when I turned around, but I did not feel confident enough in my hands, as they were still quite numb and cold.

By this point, it was already 1 PM. We had been out for 9.5 hours and were only through 2 pitches of the route. We had A LOT of climbing left, and the groups ahead of us were still moving slowly.

We did the mental math in our heads of the options we had. Continuing up the Lower Exum route was no longer in the cards, as we simply didn’t have enough time to make it through more 5.6-5.7 terrain. There was an “Escape Ramp” to our left that would lead us to the Upper Exum, but it would take us at least 1 hour to get to the Upper Exum. From there, it would be at least another 2 hours on the Upper Exum before topping out on the summit. That would mean a summit at 4 PM (at the earliest). We would likely get stuck behind hoards of people on the descent of the Owen-Spalding route, which would mean at best 2 hours to get back to the Lower Saddle. That would mean 6-630 PM at the Lower Saddle, with 6.5 miles of rocky terrain still to manage as the sun began to set. And that was the BEST case scenario. If anything went wrong along the way we’d likely get “benighted” (i.e. an unplanned night out).

Pulling the plug is always hard, but I feel that as I age and go on more adventures, it is becoming easier. I know that the mountains will still be there, even if it is years before I get to try them again. Isaiah and I looked at one another, talked it through, and opted to bail back down the route. “The devil you know is better than the devil you don’t.” Those words ring through my head all the time in the mountains. Returning along familiar territory felt like the safer option. There were rappel stations, so we would not have to leave any gear. Additionally, one of the other groups ahead of us was bailing as well, so we could tie our ropes together for some longer rappels.

We made it back to the car by 5 PM, and every step of the way down we felt we made the right decision. Sure, it was very hard in the moment to accept the “failure” of not succeeding on the route, but we strongly felt that it was the proper decision given the time and conditions of the day.

So what were my big takeaways from this trip?

Bailing on this route was certainly a heartbreaker, but I feel stronger that I was able to make the decision to bail and make it back to the car healthy, safe, and with knowledge of how to do it more efficiently the next time.