Exploring the Tepeh Towers and the Eggplant 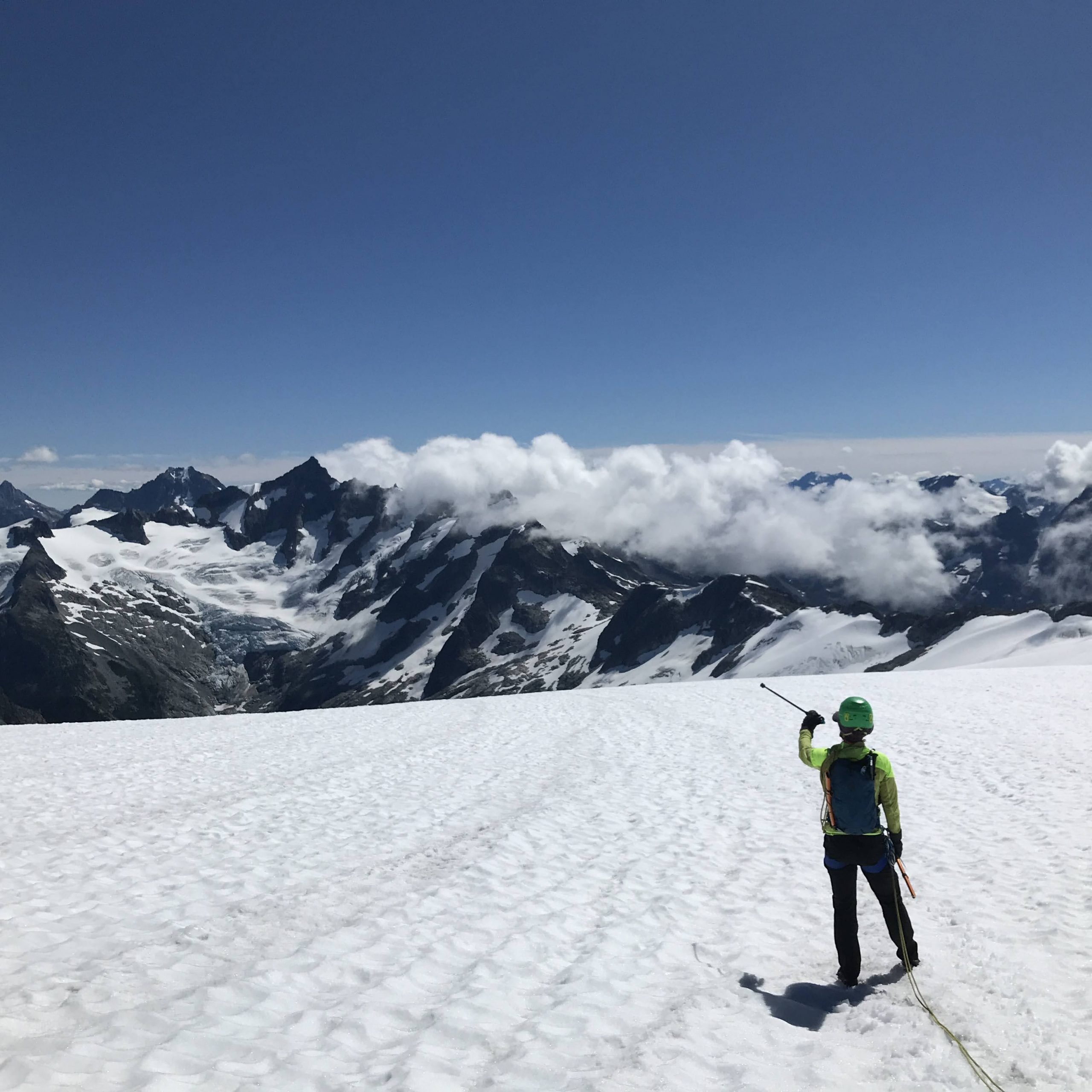 This was my first weekend after starting my last semester of college, virtually from Seattle. I knew I had to alter the balance of adventure and obligations, i.e. I would have to scale back how many trips per week I took.

A rainstorm was hitting the region on Friday, so I decided that I would try and take a day trip somewhere on Saturday. Initially, Tyler and I had been planning for a long day run somewhere, but our plans fell through and he ended up heading to the Teanaway. Deb and I had been messaging about doing something…we had tossed around the idea of doing a Sahale-Boston traverse, but we ended up agreeing that a day spent exploring the towers behind Eldorado Peak would be interesting. It would get us some vert and good training, and would be interesting to explore an area that largely gets overlooked by those going up to summit Eldo.

I mostly just wanted to get outside, so I was happy with the plan. I woke up around 3 AM and headed out towards Cascade River Road, meeting Deb at the trailhead around 6:45 AM.

Deb and I quickly found the log crossing; this time it was just downstream from the trailhead. It varies from year-to-year, and earlier in the year I had done a log crossing a little further downstream when I skied Eldorado. No wet feet? Count me in!

We hit the climber’s trail and began cruising uphill. The trail is truly Cascadian and I LOVE it…straight uphill with no switchbacks. It is in good shape because of how much traffic it gets, with dozens of climbers frequenting it each week on their way up to the peak.

Deb and I reached the lower boulderfield in around 45 minutes…sweet! I stowed my poles and began hopping boulders. Cairns marked the way through the boulderfield, but to be honest there are SO many cairns that it can see a bit circuitous at times. Deb mentioned that a trail actually follows the boulderfield on climber’s right, and we managed to find it, tucked into the brush just on the climber’s right of the boulders. The trail was MUCH faster than meandering through the boulders, especially with the rain from the night before leaving the rocks wet before the morning sun could dry them out.

I took a look back at Johannesburg Mountain…STUNINNG as always. The clouds were beginning to burn off from the storm the night before. We could tell it was going to be a good day.

We cruised up towards the traverse over to the Eldorado Glacier, following trail the entire way. The route was very straightforward to follow, and when the footpath ended the cairns began. Lovely…no route-finding to deal with. Sometimes it’s nice to just follow trail and turn your brain off, especially after a week of school.

We reached the toe of the glacier and threw on our hiking crampons. I had a pair of Hillsound Trail Crampon Pro, Deb had a pair of microspikes and a pair of Petzl Lynx crampons that she, nor I, could figure out how to put on. She opted for the micros, as the snow slopes up the glacier were very gradual, and up we went. The glacier was sealed up, no open crevasses showing on our route, at least up to the col beneath the Eggplant where the route flattens before the Inspiration Glacier. The morning snow was firm and grippy.

The clouds had cleared substantially as we reached the Inspiration Glacier, and we looked over at Forbidden Peak and the skyline to our right. STUNNING. The turquoise lake below was such a sight to see.

Instead of heading up towards Eldorado, as most others would do, we traversed around along the Inspiration Glacier towards the Tepeh Towers, tucked behind Eldorado Peak to the north. We didn’t have any one of them in particular in mind for our exploration, so we just meandered on over. The crevasses beneath the Tepeh Towers began to increase in size, so Deb and I paused, threw on our harnesses, and roped up.

We reached the towers and looked up…COOL. Deb took some time to scramble on one of them, but I chose to just sit and enjoy the sandwich I had packed. I wasn’t super interested in scrambling them…they looked pretty cool from down here. I took plenty of time to enjoy myself, throwing on a puffy and scanning the scenery around me. I could see Klawatti, Primus, Austera, and Backbone Ridge in the background, the Isolation Traverse that I want to do someday. I could see Forbidden, Torment, Johannesburg…ahh, was it a good day!

After munching, chatting, and enjoying the sun, we turned around and re-traced our steps. We saw some climbers up on the East Ridge of Eldorado, nearing the summit. Good for them! Once we reached the col beneath the Eggplant, I spotted a trail to the top. I wanted to see what the view was like from up there, so I asked Deb if she wanted to scramble it with me. She said no, as it looked loose and crumby, so I went on up by myself as she graciously waited below. Surprisingly, there was a good footpath up to the top. The view was okay, but the exploration was fun…it was nice to just be out to explore, with no real “objective” in mind.

On our way down, we passed numerous parties on their way up for the night, splitting up the climb into two days. While the campsites on Eldorado would certainly be aesthetic, I wouldn’t really opt for doing it as an overnight. It’s short enough that a single push makes more sense, at least to me.

We chatted on the way down about this and that, not a worry in the world. It felt peaceful, serene, and therapeutic to just be out for the day. So good.

We were able to find the same log we had crossed in the morning and quickly were back at the cars. My legs were tired but felt good to be worked. I had gotten in some training, plenty of views, and another day in the mountains, a win in my book.