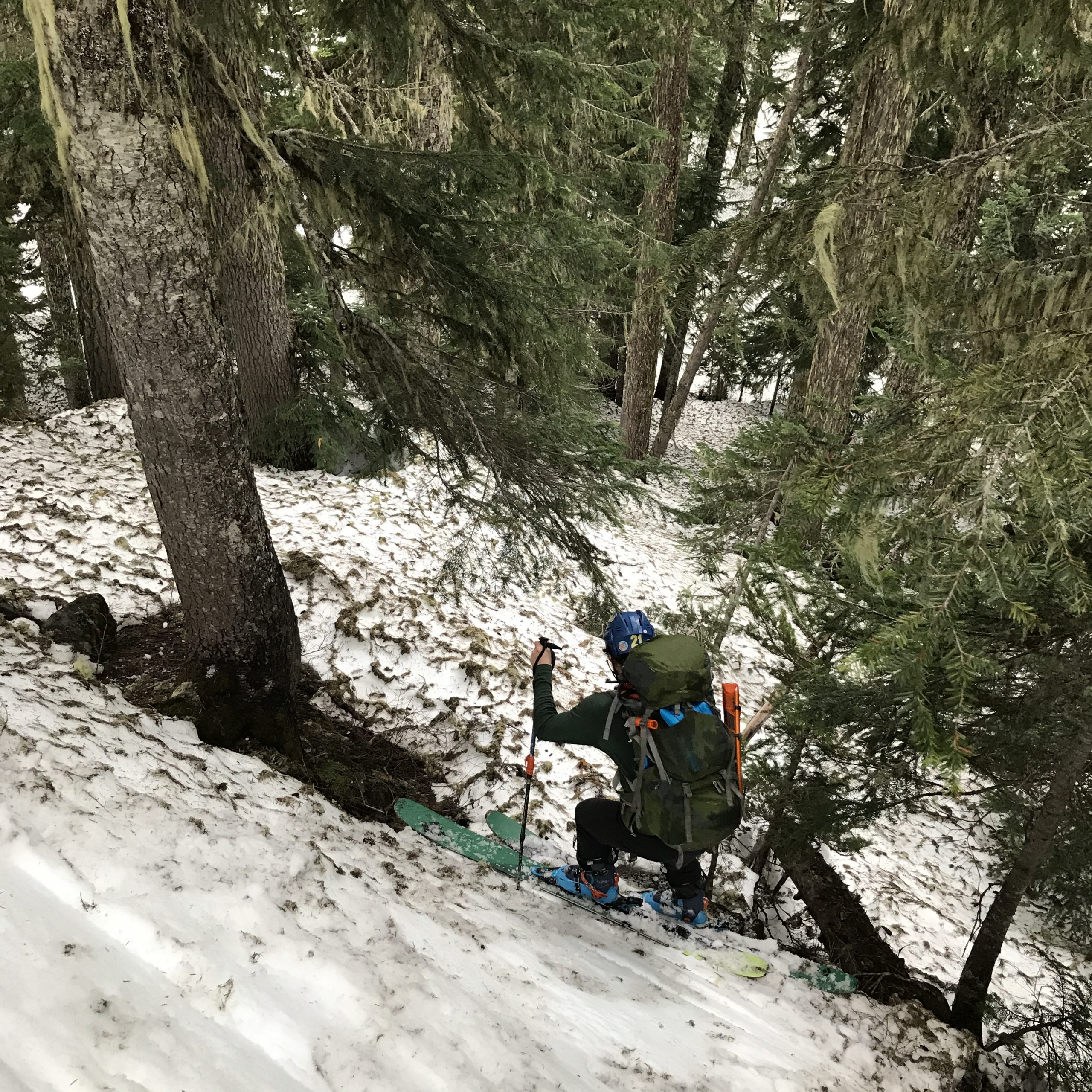 A rainy, spring weekend in the Cascades didn’t phase Jon, Tyler, and I from at least TRYING to explore a little bit. Jon and I had done Shuksan earlier in the year together; on Thursday night, I shot Jon a quick text, asking what he was up to. “Nothing much…what you got in mind?” I LOVED that response…I always have something to dream up!

My plans for the weekend changed a bit at the last minute, so Jon and I decided to try out Snowking Mountain in the Glacier Peak Wilderness. Jon got off work at 3 PM on Friday, I got off work around 1 PM, so we decided to meet up in Sedro-Wooley and head to the trailhead from there. Tyler had spent the day in the Washington Pass area, and he would meet up with us in Marblemount. We would try to get in a few miles that night, with a sunset around 8:45 PM.

Snowking Mountain had been on my radar for a few weeks, an idea from a previous weekend that eventually fell through. Snowking is a neighbor of Eldorado, and from Eldo and Boston Basin you can see it clearly, a beautiful pyramidal summit marked by a large, low-angle face. At 7,400′, it surprisingly is highly glaciated.

Snowking is accessed via a turn-off of Cascade River Road, before the North Cascades National Park Boundary. Forest road 1570 turns south and crosses the Cascade River, before winding up towards Snowking. Eventually, one comes to a pull-out where there are large boulders piled up, blocking an old road (probably for logging is my guess but I could be wrong). To reach the trailhead, there are two small creek crossings. Jon, with his Jeep, managed them easily; Tyler, with his Ford Escape, still managed them, but I did hold my breath for one moment.

BY 5 PM, we had reached the trailhead, and we were packing up our things. Our plan was to make it up towards Found Lake (4,000′) and spend the night near it, breaking up the climb across two days. Weather was forecasted to roll in around 11 AM the next day, so we would need an early start.

We began hiking by 6 PM, up the old logging road towards a steep climbers trail that would lead to Found Lake. Based on the USFS snow data, it appeared that the snowline would begin around 3,800′-4,000′, which was consistent with my experience in the area the prior weekend.

For the first few miles, the old logging road is nice and gradual, taking a gentle approach up towards a steep climber’s trail (typical Cascades…). There had been rain earlier in the day on Friday, so my pants and socks got SOAKING wet! Tyler joked that since I was leading the way, the A-Frame ski carry I was donning was slashing all the cobwebs for him (at 6’3”, he is normally the spider web magnet).

The old logging road crosses a few creeks and old washouts; clearly this is no “road” anymore, but rather, a trail.

Before we started up the climber’s trail, Jon, Tyler, and I talked about our plan for camping the night. Looking at our watches, it was approximately 7:30 PM. The climber’s trail begins at 2,200′; Found Lake is approximately at 4,000′, but to access it you first must ascend a col around 4,800′. With sunset around 8:30 PM, we had 1 hour to gain 2,600’…well, that wasn’t happening. We agreed that we would keep our eyes peeled for a spot along the climb.

Fairly soon into our ascent up the climber’s trail, we realized that a flat spot along this slope was NOT going to be a commodity. HA! At around 8 PM, we came across a VERY small clearing ON the trail, flat enough to lay 3 people…

We laughed! It was a funny situation, but…

Good by all of us! We made camp for the night in our ghetto bivy spot, around 3,000′. We had made progress up the mountain, which would make tomorrow shorter…mission accomplished. We set an alarm for 4 AM, to be moving by 4:30 AM (which we knew would be 5 AM) and went to bed, watching the sun set over Eldorado Peak and the North Cascades.

Alarms sounded at 4 AM. Breakfast on the trail…no literally, ON the trail. HA! I laughed again at our ghetto bivy as I ate my PB&J in my sleeping bag. We wrapped our overnight gear in our tarp and stashed it next to our bivy spot, as we continued up the climber’s trail towards Snowking.

Sure enough, as the USFS snow depth showed, snow coverage became full around 3,800′. This was lower than on Eldorado the previous weekend, which was closer to 4,200′, but this was a north-facing aspect. Jon and I transitioned into skins and skis; Tyler kept on up in his boots (he carried snowshoes but never used them).

We began climbing up towards a knob at 5,100′, hugging its eastern shoulder; we would descend down to the col above Found Lake, before gaining another knob, this one “Found Peak.” From there, we would continue running the ridgeline all the way towards Snowking Mountain.

The snow was typical for spring: wet, sloppy with fallen brush, and soaked our skins. Jon and I transitioned for the brief ski down into the col, as it was steep and narrow through the trees. Quickly, we were back transitioning again towards Found Peak, with Tyler within earshot. Surprisingly, Tyler on foot was keeping up with us on skis (maybe I shouldn’t be shocked, as he is an ultra-runner and extremely fit).

As we climbed up towards Found Peak, we began to get beautiful, unobstructed views of Snowking, and we could see our route up towards the peak.

Looking over at Snowking, we noticed one thing in particular: DARK SKIES! That storm was getting here faster than 11 AM it seemed. Looking at our watches, it was already 7:30 AM once we reached Found Peak. At 5,600′, we had the undulating ridgeline and over 2,400′ ascent left to go. We could make it by 11 AM, but it would be tight…and that storm was coming faster than expected, it appeared to us. We had to weigh the decision:

We chatted…our goal for the trip was just to get outside, explore the Cascades, and enjoy ourselves. We weren’t out for a feather in our caps. We continued on to a nice overlook, having some fun looking at some rocks along the way.

By the time we were back in the trees on our way down, raindrops began to fall, at 9 AM! We were content with our decision…no regrets. We’d explored Snowking and scouted the area. We know the route better for when we return!

The descent was a bit heinous at times, but overall not too bad. The skiing was certainly “adventurous”, as Jon put it, with hairy branches and thick spring snow making for some UGLY turns. That, paired with the steep climber’s trail going DOWN, made for some delicious oreos back at the car.