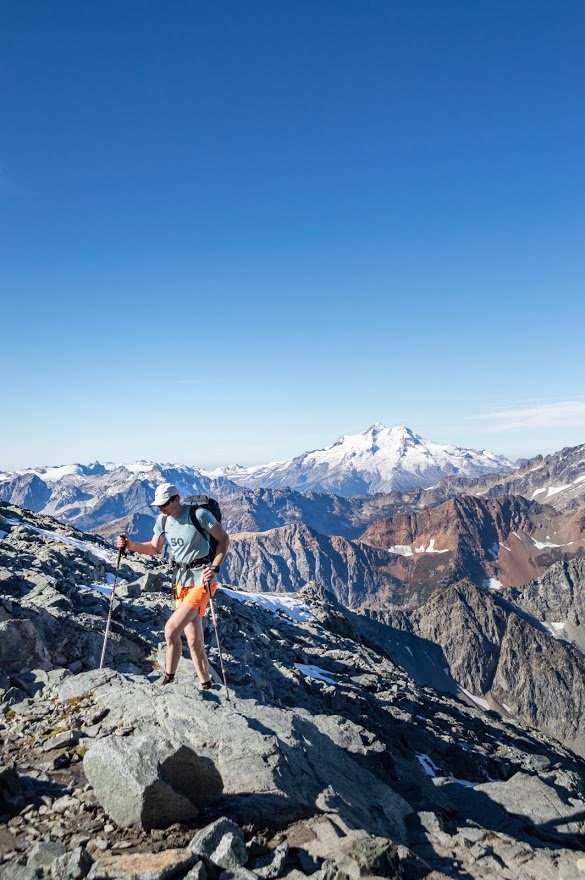 My friends Kyle and Steve had been hyping up the Fall colors over the past week, with magnificent photos of larches from the Eastside. Growing up on the East Coast, I had never seen a larch before…needless to say, I wanted to get in on the action.

Tyler and I had work until Friday afternoon, typical “weekend warriors”, so we planned to leave town around 5 PM on Friday night and make the 3.5 hour drive up to Phelps Creek Trailhead, where we would sleep in the back of my Honda Element (the “Hotel-ement”).

Our idea was to follow the Carne High Route up towards Mt. Maude, then continue along the ridge towards 7 Fingered Jack (7FJ), from where we’d drop down to a tarn along the the ridge between and Mt. Fernow for an overnight bivy. We’d tag Fernow the next morning, and if we were cruising, would try to add Genius Mountain, another Washington Bulger. Then we’d ‘shwack our way down to Phelps Creek above Spider Meadow, where we’d hike back down the valley to the car.

In all honesty, I didn’t think we’d make it all the way to Genius, and in the back of my head I knew that we’d end up with (3) Bulgers…which sounded good to me! Oh…and the Fall colors, I knew they’d be a gem.

The road up to Phelps Creek is infamous, striking fear into many. I happened to sleep through half of it, Tyler being the hero and taking the wheel once I got sleepy on the drive out of the city. We reached the trailhead by 9 PM on Friday night and….HOLY SMOKES, the trailhead was already full of cars? Well, it was fall and this was the Entiat Range. Maybe I shouldn’t have been surprised. We were able to sneak into a single spot, parked the car, and hit the hay for the night.

We packed light and sparingly for the weekend, ditching the stove in favor of cold food and just brining bivy sacks. The weather forecast was warm, dry, and very mild. We anticipated there would be ample water sources along the way, with recent snow melting from high up along the ridgelines.

I knew the Fall colors would be good…but I didn’t know they would be SO GOOD. Wow…even in the dim morning light I was blown away. I had never seen anything like this. Golden larches mixed with yellows, greens, reds, oh my! I couldn’t keep up a quick pace because of how frequently I wanted to stop and take pictures.

I turned around on the switchbacks up towards Carne Mountain and saw Buck Mountain, standing tall in morning alpenglow. Stunning!

We took the quick side trip over to Carne Mountain, our first summit of the day, watching the sun glimmer over the eastern Cascades and bathe us with light.

From Carne we continued along an “un-maintained” but very well defined bootpack towards Mt. Maude. We passed a pair of campers along the way, as well as a father-son duo following the trail towards Ice Lakes. The closer we got to Mt. Maude, the more crowded it got. Many more hikers took Phelps Creek towards Leroy Creek, then climbed up the Leroy Creek Trail towards Ice Lakes, rather than ascending up the switchbacks to Carne then descending and ascending numerous ups and downs along the ridgeline, as we did. But they missed out, in my opinion! It felt more like a high route this way, and we were treated to larches, Glacier Peak, and more solitude this way.

Water was flowing in Chipmunk Creek, allowing us plenty of quick sips as the day began to heat up. SWEAT…long sleeves and pants sure helped with sun protection but MAN was it hot. It’s October! Well…felt more like August.

We came across nearly half a dozen hikers once we reached the col just to the south of Mt. Maude, where the Leroy Creek Trail meets up with the Carne route above Ice Lakes. There was still snow lingering from the early-season dusting the region had gotten a week before.

We stopped for a quick snack break then headed up the loose dirt, rock, and scree towards the gradual slopes to the south ridge on Mt. Maude. The grade was so gradual for such a striking peak! The north face of Maude is a classic alpine route in winter, so it felt weird to be walking up the other side.

Atop Maude we were joined by two other hikers, one up from Leroy Basin, the other up from the Entiat River basin. We chatted and snapped photos, snacked a bit, and then headed back down. We had climbed 7,000′ thus far, but we still had 7 Fingered Jack ahead of us for the day. From Maude we could see the climb up to 7FJ would be loose and horrible quality rock. Yay…

We turned around and headed back to the south col below Maude to head back down below the ridge to the trail towards Leroy Basin. On our way down we could see the “conga line” of hikers coming up Mt. Maude…it was “fall colors weekend.” It seemed the hikers had started up from the trailhead just a bit later than us.

The hardest part of climbing up 7FJ was not getting annoyed with the loose, crumbly rock. The route was well cairned, and aside from a few moments when we stopped to investigate around, the route-finding was simple. By the late afternoon we reached the summit and began to head down towards a tarn to the northwest between 7FJ and Genius Mountain.

Although it felt like August the setting sun around 6 PM reminded us that it was October. The larches began to glow golden again, as the light became more and more oblique.

Tyler was braver than I and decided to cut weight by ditching his sleeping pad. A true mountain man? I don’t know, but I’ll say I enjoyed my NeoAir air mattress. Maybe I’m just soft. Our timing was perfect into camp, reaching in time to catch the sun setting beneath the Glacier Peak skyline. Splendid!

The day was sneaky long…9,800′ of vertical gain and nearly 13 miles. We had made it to our goal camp but our legs were more tired than we had expected, or at least I had hoped for. The loose rock was slow and tedious. We opted to “sleep in” to 6:30 AM, 30 minutes before sunrise, and give ourselves a more relaxed morning. We didn’t anticipate we would feel up for much more than Fernow, so we figured we’d enjoy the rest.

We woke at 6:30 and indeed, we enjoyed our relaxed morning. We packed up and headed down from the larch meadow where we had camped towards Fernow, descending around 600′ to traverse the moraine beneath 7FJ and Fernow. More loose rock! This time glacial moraine…again, yay.

From the moraine below 7FJ we were intimidated looking up at the route Fernow. It looked steep, slabby, and shear. We had read that it was only Class 3, but the route looked improbable. We agreed to continue up closer and see how it would go. The closer we got, the more we could see the ledge systems and “steppy” nature of the climb. It weaved up, across benches and rock ledges, towards the ridgeline between 7FJ and Fernow.

Near 8,400′ we reached a large bench holding permanent snow, water flowing down and out for a perfect water break. I turned around and saw Tyler climbing up below me, with Glacier Peak at large overhead. WOW!

The route finding up Fernow continued to be a bit perplexing. From 8,400′, we climbed up loose talus to the ridge between 7FJ and Fernow, where we were able to pick up cairns weaving up and around to the SE ridge of the summit block. It felt something like the Corkscrew route on Sloan, just in the way that it wound around and around and was a bit circuitous. We stayed healthily dubious of each route finding decision we made, making sure to not get ourselves up something we would not be comfortable getting down. The route stayed Class 3 the entire way, and by 12 PM we were at the summit. WOW…it was slow. We had made the summit in 4.5 hours up. Looking at the time, we woofed down our food and sped up our descent. We realized the day was ticking away.

The wind picked up on our way down cooling us off and actually leading us to put on our wind jackets. The loose talus on the descent aggravated me…I was TIRED of loose rock.

Back the way we came, I was SOOOO happy to reach our camp again, as it signalled we were done with bullshit rock. Now, back to larch heaven!

We bushwhacked our way down towards Spider Meadow. The ‘shwack was mostly gradual, steepening at times to 30 degrees or so over blow-downs and down steep alder. For the most part, though, the ‘shwack was mellow and SO much better than downclimbing loose, garbage rock.

By 4 PM we were back at Phelps Creek and cruised our way back to the car. My first larch march…I love larches.