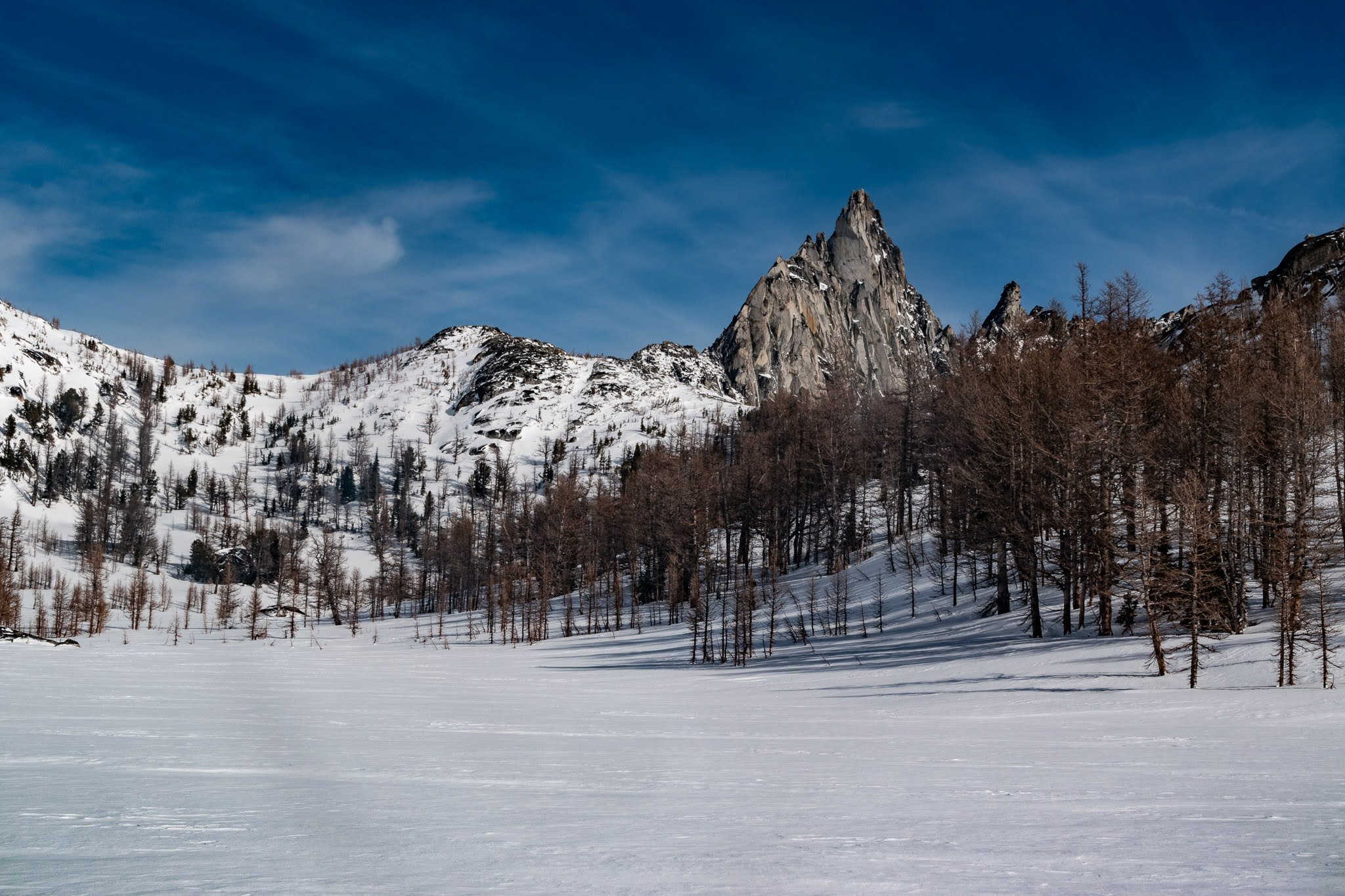 The Enchantments are a coveted Washington gem. In the summer (starting May 15), overnight access to the area is restricted by a lottery system, so either you get lucky and grab a permit through the lottery, get even luckier and snatch a walk-up permit at the Leavenworth ranger station, or make the hike/run into the Enchantments in a day.

OR. . . you go in the winter, when the snow is plentiful, nobody is in sight, and the trees make the area feel, well. . . enchanted (pardon the pun).

The Enchantments Traverse on skis is no small undertaking. It requires you to travel through and underneath avalanche terrain, (traditionally) involves carrying overnight gear (which can quickly add up to significant pack weight), and (ideally) requires a clear weather window, which is a rarity in the Pacific Northwest.

As a group, we met up in Issaquah at 5 AM at a park-and-ride to go over last minute details, have a discussion about conditions and risks, and split up tents and group gear. For three days prior, the Cascades had been hit with a warm and wet storm system that brought significant moisture to the Cascade Crest, primarily hitting Stevens Pass and Snoqualmie Pass. The Enchantments, though, appeared to be somewhat sheltered from the western front; as a group, we planned to keep our eyes open as we travelled further into the region, making observations and looking for signs of instability.

Wet, dense snow poured down on I-90 on our drive to Snow Lakes trailhead, but eased off as we crossed up and over the Cascade Crest. Grey clouds that hung over the Seattle area gave way to beautiful blue skies in Leavenworth. Needless to say, we started to get EXCITED!

Once at the Snow Lakes trailhead, we shuttled a car down Icicle Creek Road to the road that leads up to Colchuck Lake trailhead, as the road up to the trailhead is closed in winter and full of snow.

We started up towards Snow Lakes around 10 AM, about an hour later than we had planned. We began the hike up to Snow Lakes in boots, as the trail was mostly bare with patches of snow from time to time, mixed with compacted snow that made for easy travel.

Once we reached about 2900′, the snow on the trail piled up to a point we could begin skinning.

Once we started skinning, we followed the trail up to Snow Lakes. The trail was covered with fresh, untracked snow, but the rough outline was still easy to follow, even with all the twists and turns through boulderfields.

As we moved up the basin, we kept our heads on a swivel, looking for any signs of instability and previous avalanches. To our pleasant surprise, the overhead slopes looked promising: we saw one cases of small roller balls on a SE facing aspect, but aside from that there were no major slides to be seen.

The first area of concern was a major boulderfield, which can be seen below:

Based on the observations we had been making throughout the day, we felt comfortable with the stability of the snowpack. Still, we gave space between each person and kept our eyes open for any small sluffs, roller balls, or slides.

Once past the boulder field, we reached the lower Snow Lakes. My jaw DROPPED!

The light poured down through the clouds softly; the wind kicked up some surface snow, created a mist that seemed truly magical.

The lake was frozen like a rock and covered with a top layer of powder. We gave space between each person for caution.

At the lower Snow Lakes, we took a look at our watches and realized the time was ticking away, fast. It was approximately 3 PM, and our initial goal of Lake Perfection now was clearly unreasonable.

We switched back through another boulder field on our way up to Snow Lakes, reaching the dam around 4 PM or so. We decided to revise our plan to camp at the end of Snow Lakes, just below the climb up to Lake Vivian, and wake up earlier the next morning to compensate. There was unfrozen water near the dam, so we filled up our bottles to keep from melting snow.

The route across the outlet of upper Snow Lakes was hard to follow, and we had to climb over a small knoll, which knocked the wind out of us at the end of a long day. We picked a beautiful camp spot at the end of the lake around 5 PM, as the moon was rising over the horizon.

We were blessed by NO WIND, so our open and exposed camp spot on the shoreline was perfect for a clear night. The temperatures dropped down into the low teens at night, and we quickly shoveled down some food and piled into tents for an early night. We would have to make up ground the next day with our revised plan, so we planned to wake up at 5 AM and head out by 6 AM (spoiler: we were slow, as expected, and missed that timeline).

Well. . . we heard our alarms sound at 5 AM, but we didn’t start making headway up towards Lake Vivian until 7 AM. Slow morning. . . oh, well. Sounds about right.

Our day ahead was going to be big. . . it was approximately 2200′ up to Aasgard Pass (7800′), then a ski down Aasgard, through a labyrinth maze of trees below Colchuck Lake, then down the road to Icicle Creek Road.

The climb up to Lake Vivian was tough, as we struggled to find a clear path through the trees. I chose to set a skin track following a ridge line up to the pass below the lake to limit exposure to overhead terrain, but it took us HOURS.

There were a few spots that were clearly wind affected, alternating between being icy and scoured and fluffy and wind-loaded. They remained stable to ski cut and hand stability tests, though, so we pushed onwards.

We reached Lake Vivian at approximately 10:30 AM; the ridgeline took us 3.5 hours! We lost critical time in the trees at the base of the climb, and the skin track I set was steep at points and not the best, I admit.

We grouped up at Lake Vivian and had an important group conversation about our timeline. We felt that skiing back down Snow Lakes basin would be more hazardous than proceeding onwards, as the thick, dense trees would make for tricky skiing. We realized that we were late in our day already, almost 11 AM by the time everyone had reached Lake Vivian, and we still had to traverse the “core” Enchantments, ski down Aasgard Pass, ski down through the trees below Colchuck Lake, and ski down to the cars.

We set a “deadline” time of 4 PM to be at the top of Aasgard Pass. It would be extremely late, but it would give us enough time to get down the pass with light. We split the group into a “faster” and “slower” half, the “faster” half breaking trail.

We CRUISED through the core with bluebird skies to help us along. Prusik Peak loomed high above with barely any clouds in sight. It was near perfect weather. We followed the summer route around the lakes for safety and assurance, avoiding steep aspects whenever possible.

The snow was severely wind scoured at the upper levels of the core zone, especially on the final approach to Aasgard Pass. For most of the day winds came from the NW, straigh through Aasgard Pass and then down Tranquil Lake basin through the “core” zone.

The “faster” group reached Aasgard Pass around 1:30 PM; the rest caught up soon after around 2 PM. Based on the firm snow at the top of Tranquil Lake, we knew we would be in for a choppy ride down, at least to start.

I lead the charge down Aasgard Pass initially, trying to find a line down. For the first 200 feet or so, I booted down on firm and icy punch crust. I did not feel comfortable skiing down yet, with rocks and terrain traps below before the pass opened up to wider slopes. I stayed to skier’s right of the pass, aiming for a wide bowl that opened up around 200 feet below the top of the pass. From there, it appeared, we could ski all the way down to the lake shore.

The trickiest part came on a set of boulders with grey ice to skier’s right. One by one, we hiked around the section, which gave way to open skiing all the way down to the lake. Each person helped pass down skis and poles, then we each clicked in one at a time and rode down to a safe stopping point.

Now it was time for some turns! The first few were icy and crusty, but soon gave way to an amazing top layer of powder. Oh how amazing it felt!

It took us around 2 hours to get down Aasgard Pass, as we staggered each skier (and one splitboarder). We re-convened at the outlet of Colchuck Lake around 4:45 PM, readying for our descent through the trees to the summer trail below.

The descent down to Mountaineer’s Creek is notoriously challenging. Thick trees and downed log make for a maze. For the first 300 vertical feet of the descent we made easy turns, yet the forest soon became too dense for easy travel. We picked up tracks from a pair of snowshoers that seemed to be following the summer trail and took it all the way down. Was it the fastest way down? Maybe not, but as we began to lose light and transition to headlamps it was much easier and safer to follow.

The summer trail twisted and turned down to Mountaineer’s Creek and became a rutted out “luge” track (as my friend, Zach Hein, called it). I took off my skis for parts of the “luge”, finding it easier to bootpack the firm snow rather than skid and skate my way down.

Once at the footbridge over Mountaineer’s Creek, we transitioned to climbing skins and skinned our way down to Colchuck Lake trailhead. The trail was wide enough to make it easy going. Snow coverage was full, with only a few bare trees poking through here and there.

We reached the trailhead around 7 PM and continued to skin our way down the road towards Icicle Creek Road, where we had a car parked. As previously mentioned, the road was closed in the winter, full of snow, which made for easy skin skiing. For the first 1.5 miles the road was flat enough for us to keep skins on; once we reached a sign that indicated a downhill grade, we ripped our skins and skied all the way down to the cars. It was icy and crusty but our tired legs appreciated the lack of effort required.

DONE! Around 8 PM we reached the cars, tired, sore and hungry after a long day. But satisfied with an epic adventure.