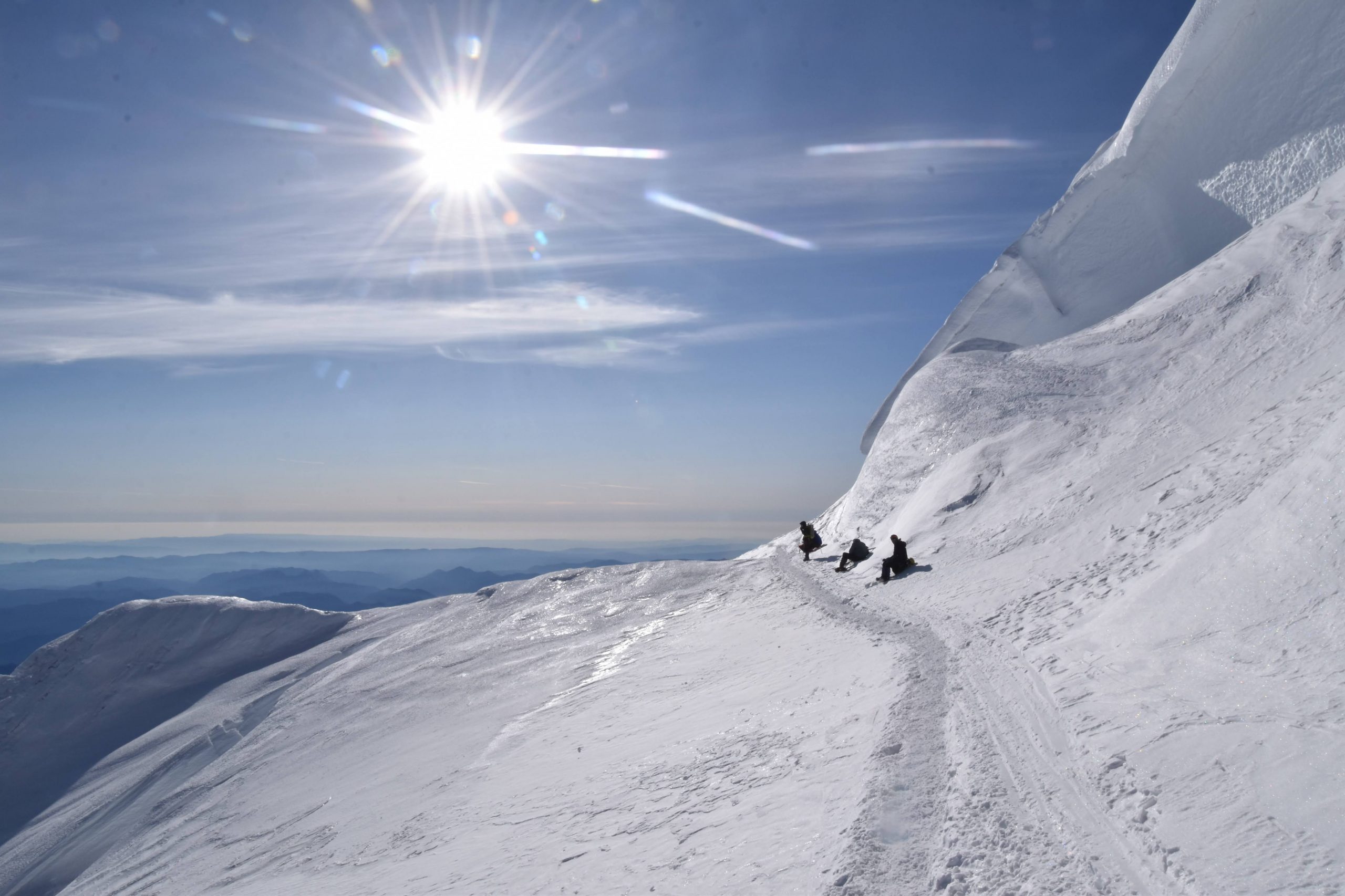 In the summer of 2019, by buddy Hans Webster and I road-tripped from Portland, OR to Seattle, WA, climbing volcanoes along the way. This was the third in the trip.

Hans and I had just finished up Mt. Adams and drove north to Seattle to climb Mt. Rainier. Our plan was to climb up to get to White River on Friday to pick up our climbing permit and hike in a few miles to Glacier Basin and camp the night. Our friends Justin and Adam had work on Friday (at Boeing), and would meet us at Glacier Basin camp early on Saturday morning. We’d then climb up to Camp Schurman together and spend Saturday night at Camp Schurman. Sunday we’d climb to the summit and hike all the way out. BOOM.

Tyler, Hans, and I made the short hike up to Glacier Basin, taking in Mother Tahoma on a clear day. We met a few skiers and climbers coming down from the summit, and they shared some beta that conditions were good…just a bit icy in some spots.

The next morning, Justin and Adam met Hans, Tyler, and I at camp and we hiked up the Inter Glacier to Camp Schurman. There were plenty of skiers just hiking up to Steamboat Prow to get some turns on the Inter Glacier. Justin had brought his splitboard, so he was skinning up as the rest of us booted.

Once we were up and over the Inter Glacier, we roped up on the short hike up the Emmons Glacier to Camp Schurman. Even though it is only a short ways from camp, there are many open crevasses. The rangers talk about this area having the most crevasse falls of anywhere on the route, mostly because many people don’t rope up because they are so close to camp.

We reached Camp Schurman just around lunchtime and set up our tent among the masses. It was going to be a crowded weekend! There were many other climbers on the mountain, and it was fun chatting and hearing others stories.

We hung out, melted water, and watched the sun set. With the sun staying in the sky until nearly 9 PM, it was hard to get to bed early!

We woke up at 12:30 AM, and were out of camp at 1:30 AM, heading up the “Corridor” on the Emmons Glacier. Tyler, Adam, and I made one rope team…Hans and Justin the other. We passed every single party on the route..lol. At the time we climbed it, the route traversed all the way over to the Winthrop Shoulder; at times, the route is more direct up the Emmons Glacier. This time, however, there was a large bergschrund that had opened up and forced climbers over towards the Winthrop.

On the summit, everyone had their own shenanigans. Justin had brought a Rainier beer (very basic), Tyler was quite normal, Hans was a typical goober, and Adam struck his best pose.

On our way back down we passed many skiers on their way up the route, for what sounded like an AMAZING ski objective. Need to go back!