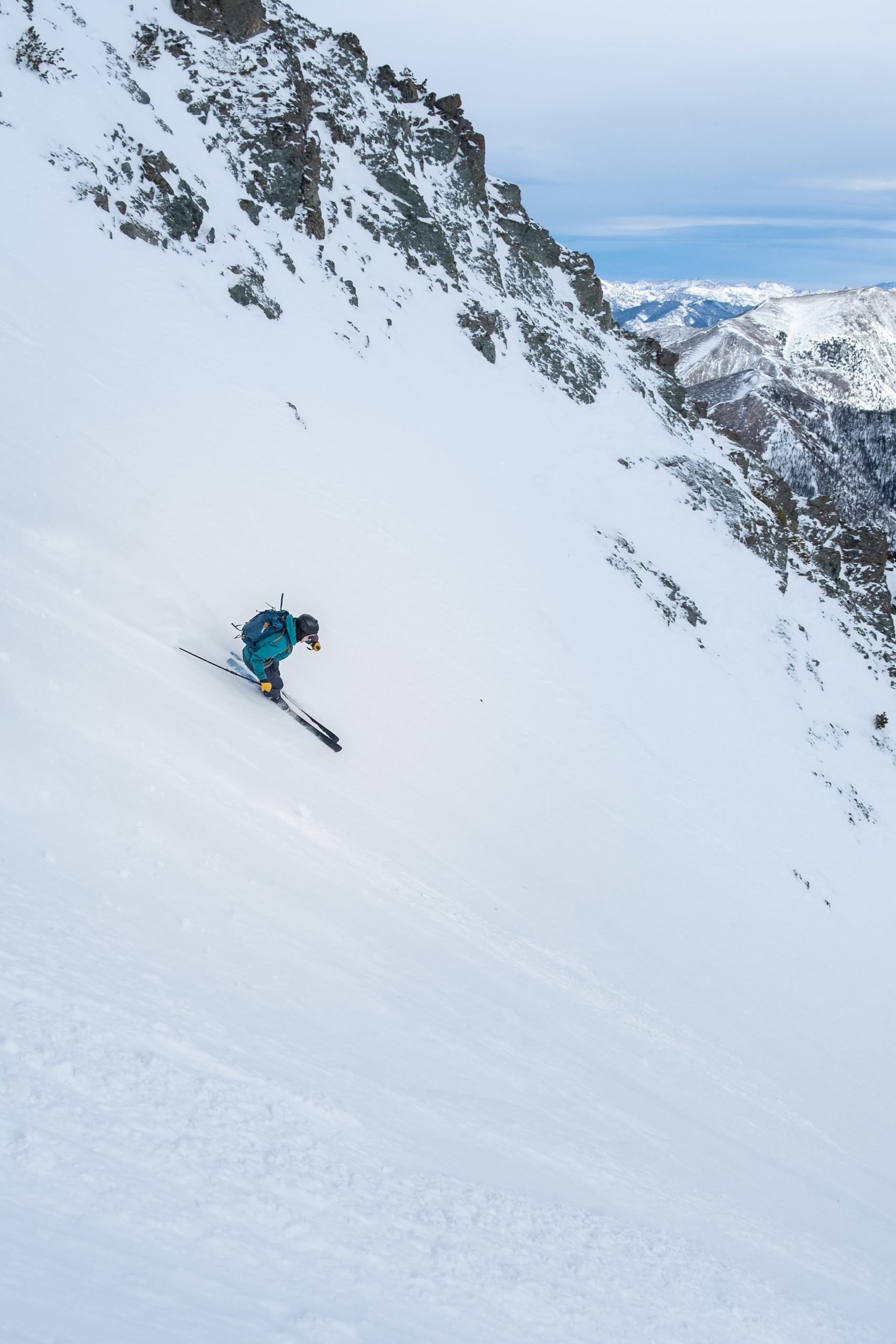 Since I moved out to Washington I have not had a chance to explore much of the surrounding states in winter, namely Montana. Back in college, I did a great job of “smash-and-grab” trips…planning small weekend adventures to far away places.

I saw a window of opportunity in MLK Weekend 2022. The Cascades were getting rain and high freezing levels, so I turned my sights outside the state. I hadn’t seen my friend Logan in just over a year, so I felt this was a great opportunity to go out to Bozeman and see him. Montana was in the middle of a rare stretch of stable snow, especially for January.

It did not take me long to notice Emigrant Peak on Caltopo…it’s highly prominent and very close to Bozeman. I noticed an amazing line on the SE side of the peak, and after googling around quickly I found that it was a local classic line: the SE Couloir of Emigrant Peak. Locals will normally ski the line in spring, March/April, but with this stretch of stability we felt we could go out and explore it.

Logan, Eliot, and I met up in Bozeman at 6 AM and drove up together towards the small town of Chico, MT. From there, we followed a forest road for another 2.5 miles or so, to a point where it no longer made sense to keep driving. We slapped on skins and prepared for another few miles of road skinning.

It was un-Montana like warm, with temperatures in the low 20s…did I bring the warmth from Washington with me!?!? We followed faint skin tracks up the road and towards the basin of Emigrant Peak, where we began to get eyes on the upper mountain. Montana is such a stark contrast to Washington: all of the west facing aspects are BONE dry, ravaged by strong winds that transport all of the “blower” powder off the mountains. Logan and Eliot had a blast watching my reactions to looking up at the western slopes above…a look of fright, for my skis. I could just hear the rocks and ground scraping against my bases! No need to fear, they encouraged me, for we would be skiing east facing slopes, where the snow was transported TO. PHEW!

We followed the faint skin track all the way up to the base of the couloir; we looked up in amazement. A proud 1,500′ line off the summit. It looked so good! Winter is normally a time to scale back and just ski glades, but there are a few rare occasions where big lines are possible!

The snow was firm and most windboard, but variable powder in a few spots. We transitioned to booting a few hundred feet from the base of the couloir; around halfway up we dug a pit to test stability. We had left our saw back at the car, so our Extended Column Test (ECT) was definitely non-textbook. We had a somewhat alarming result from our first ECT, a planar fracture around 10 inches down, but the ECT was not properly done, so we weren’t sure if we should trust our result or not. We moved over a bit and dug another pit, and found a wildly different result: we weren’t able to get any fractures. We were perplexed; the Montana avalanche forecast was low danger on all elevation bands. We were wary of wind slabs, in particular, and felt that we could pick out where the snow texture was prone to slabs, on skier’s right hand side of the couloir. We agreed to continue up and monitor the snow as we climbed.

Climbing up was tiring, and we began to wallow through lighter snow as we topped out the line. The ridge to the summit was SUPER windy, but we had a blast rejoicing from the top, taking in the amazing views all around.

We hiked back down along the bare ridgeline to the top of the line; there was a small cornice to navigate, but nothing crazy. I clicked into my skis and watched Eliot make the initial turns into the line. The snow was firm, with a chalky texture on the surface. Eliot made a few turns and ducked skier’s left to a safe zone, waiting for Logan and I to join him.

I made an initial hop turn and my ski popped straight out of ski mode into walk mode! Thankfully I was able to stop myself without losing control, but I was definitely caught off guard. Once my ski boot was locked in place again, I was in much better control. Phew!

We played leapfrog down the couloir, one skier going first, then the other. The snow texture stayed pretty firm throughout, but there were a few pockets of softer snow to be had! The aesthetic of the line was the attraction for the day…we knew the snow wasn’t going to be great.

Near the bottom of the line, we looked back up with pride at our accomplishment for the day. What a line! We saw a party of 2 with 2 dogs at the bottom of the couloir, which confused us a bit. A long road approach…and not even skiing the major objective? Hmmmm….

We linked up turns back down to the road, only scraping a few rocks along the way. Classic Montana…

The descent down the road was actually much better than we thought it would be. We feared endless pushing and skate skiing, but for the most part it was quite easy. We reached the car around 2:30 PM and headed back to Bozeman in the daylight. A great day with a great line!