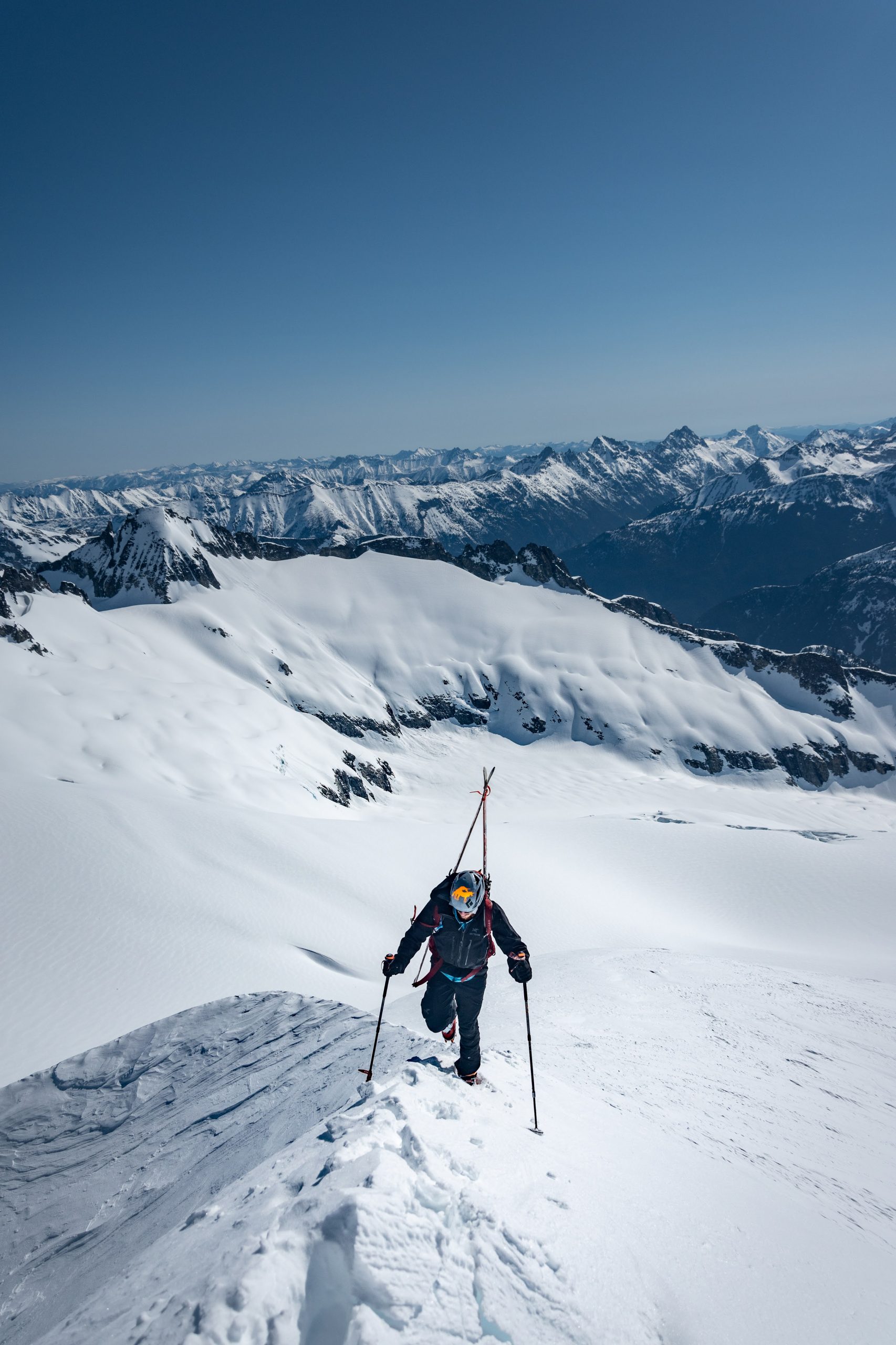 The Team: Chris Sommer, myself

In the summer of 2019, I gazed across at the Eldorado Glacier from Forbbiden Peak, amazed by its beauty. I had to return…it was just a matter of time.

Finally, a weekend of high pressure in May! Chris and I had done numerous trips together already throughout the year, and we were stoked for another: Eldorado!

Eldorado Peak is a striking feature of the North Cascades, both for its famous East Ridge, and for its glacier, one of the Fifty Classic Ski Descents of North America. In the past year, athlete Cody Townsend has popularized the list through his YouTube series, THE FIFY PROJECT.

To be honest, Cody’s project and the book had nothing to do with my interest in Eldorado. Rising 7,000′ above the Cascade River basin, it is simply striking in its scale, pristine nature, and awe striking beauty.

We knew Eldo would be a big day, so we planned to camp on Cascade River Road in our cars Thursday night. The forecast for Friday was HOT, and we wanted to be off exposed slopes as early as possible to minimize our exposure to wet slides. We set out alarms for 1 AM, with intentions of moving by 2 AM from the road closure at milepost 18, at the national park boundary. We would hike the 2 miles to the trailhead and begin to follow the steep climbers trail up Eldorado Creek towards Roush Basin to the west, then follow the Eldorado Glacier to the East Ridge.

Alpine starts…gotta love ’em. Well…at least I do! There’s something about walking through the pre-dawn hours that makes me feel alive, ready to tackle a new day. Chris and I strapped our skis and boots on our packs and hiked the road beginning just before 2 AM. We chatted about this and that as our headlamps shined in front. The road was completely snow-free, with only a few downed trees and other road debris scattered about.

Before we knew it, we were at the trailhead and trying to find our way across the North Fork of the Cascade River in the dark…not as easy as it sounds. Up river…down river…THERE IT IS! We found a collection of logs just to the west of the “marked trail” that seemed to work. We straddled the logs very clumsily, getting our feet wet in the process, but we managed not to fall in! I’ll call that a victory!

Once we crossed the logs, we easily managed to find the climbers trail, which was well cleared and simple to follow all the way up along Eldorado Creek. The climbers trail is truly Cascadian in nature, steep up the glacially carved hills of the North Cascades. As climbers trails go, though, it is very tame, not brushy or bushwhacky and even has a few switchbacks here and there. In heavy rains it could become a muddy mess, but for us it was quite pleasant, as steep trails go.

The climbers trail climbs to a clearing around 4,000′, where a large talus/boulder field is sure to slow progress. For us in the early season, the boulder field was a mix of snow, slide alder, and slippery moss, a fun mixture with skis strapped on!

The snow was rotten and postholey, but fortunately there were prints to follow here and there. Once we reached 4,500′, we decided the snow cover was full enough to slap on skins and continue up with skis. WAS I GLAD THAT I BROUGHT AN EXTRA PAIR OF SOCKS! We switched out of our trail runners and into our ski boots and clipped on ski crampons. The morning snow was firm and slick, and without ski crampons we would have been slipping and sliding all over the place. My ski crampons are in the bag for all spring trips, even if I don’t use them.

Climbing out of the first boulder field was steep, but mellowed out around 5,500′ to a gradual clearing up towards a ridge separating Eldorado Creek from Roush Creek. We would have to traverse to the west over the ridge, and we sighted a notch in the ridge that looked favorable. Along the way we spotted a pair of climbers camped out, with a beautiful view of Cascade Mountain, Johannesburg Mountain, and the Cascade River valley below them. STUNNING!

To cross over into Roush Creek basin, you must ascend the ridge separating Eldorado Creek and Roush Basin, then descend down a 3rd class gully. We managed to traverse a bit too far along the ridge, and had to end up skiing down the ridge to find the gully. In the early season, the gully was filled in with snow, as is evident in the picture above. We clicked into our skis and scraped down the gully onto the Eldorado Glacier, to begin our approach towards the East Ridge.

Once we crossed over into Roush Creek basin, we could see the Eldorado Glacier, rolling up towards its parent peak. We hugged the eastern slopes of the glacier, skinning up easily in the firm morning crust with our ski crampons. We could tell where crevasses would open up later in the season, but the early birds get the worms, and we were treated to a nicely sealed up glacier.

The morning light lit up the Cascade River valley behind us. It would have been a CRIME not to look back a few times and gaze at the scenery.

Once below the Eggplant, we could sight Eldorado, the gentle slopes to the east leading to the East Ridge. For a second, I had the thought of skiing the South Face…maybe some other time!

Once on the Eldorado Glacier, the route is extremely straightforward: follow the natural eastern slopes on the Inspiration Glacier to the East Ridge. Chris and I took our time skinning up, admiring the scenery around us.

Eldorado is most well-known for its East Ridge, which in the summer months melts out to form a knife edge. Well…in the early season it is hardly a knife edge, or rather, a really crappy knife that wouldn’t cut anything.

It was still a blast though! We booted up to the top, where the wind was HOWLING!! A few pictures, skis back on, and we were ready for the descent.

We were able to ski back down to around 4,200′ in the boulder field, where sadly we had to take off our skis and return to postholing, now downhill. Fortunately, the sun was out, the skies were clear, and we had a great day of skiing!

We returned down the climbers trail to the North Fork of the Cascade River, but this time we were SO HOT that we decided to wade through the river to cool off. WORTH IT!