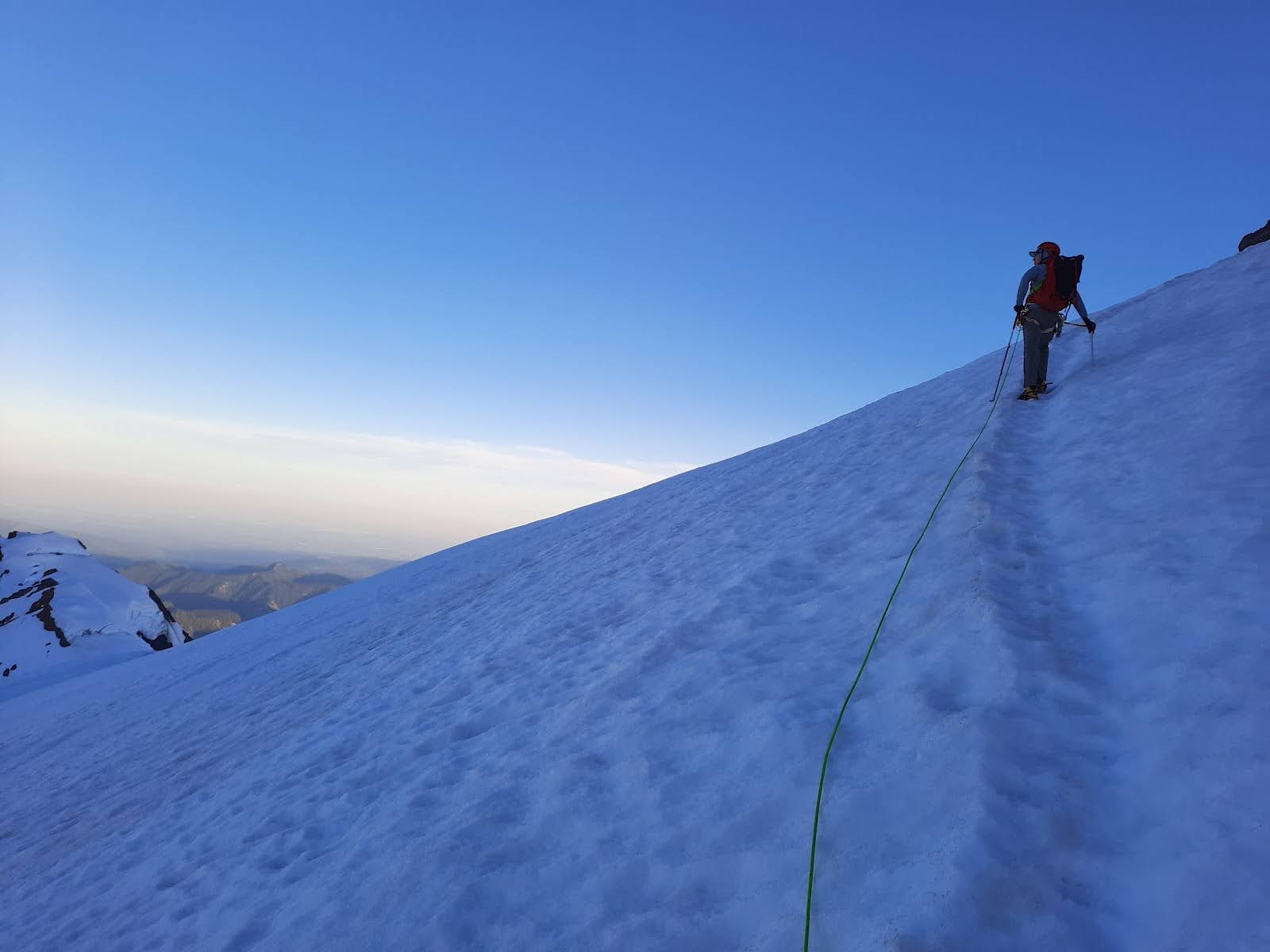 BACK IN ACTION! Late in May, over Memorial Day weekend, I injured myself in a ski accident, which required surgery to clean out deep lacerations and put me out of commission for around 8 weeks. I returned to Miami to be with my family and recover from the injury. Long story short…I got VERY lucky with how fast I was able to heal. I was able to start physical therapy within a month, which limited the amount of muscular atrophy I sustained and got me back into action sooner.

I had a 3 week “vacation” between the end of my Spring/Summer internship and the start of classes in August (my FINAL semester of college…geez), and I was able to return to Seattle right on schedule! I had plans to head out to the Beartooths and Wind River Range for two weeks in early August, but had a one week “warm-up” beforehand.

I messaged Tyler that I was going to be back in Seattle, and he agreed to take a few days off of work. We agreed on two ideas: (1) climb Mt. Baker, Tyler’s last Washington volcano to complete, and (2) return to Sloan Peak, where we had made an attempt earlier in the year but turned back just below the summit due to unsavory snow conditions.

By this point, I had climbed Baker 4 times: the Easton twice, the Coleman-Deming, and the North Ridge. I didn’t care…Baker has a special place in my heart. It was my first glacier climb in college, and in my opinion, is an adventure WONDERLAND.

We debated about doing a single-day push or doing a relaxing overnight, and with this being my first trip back from injury, we agreed on the overnight. The weather was perfect, and we planned on a Monday-Tuesday trip for less crowds.

It was HOT…a heat wave was hitting Seattle, with temperatures reaching the upper 80s in the city; the forecasted overnight temperature for Monday, on the SUMMIT of Baker at 10,781′, was 40 degrees F. Ouch! We rolled into the trailhead at Park Butte, hopped out of the car, and immediately came to the same conclusion: water…we were going to drink a lot of it. I am normally a CAMEL when it comes to hiking…there are some days I will only drink 500 mL of water. It is not a good thing…it’s just a thing.

We lathered ourselves in sunscreen and began to shove gear into our packs. It was around 5 miles and 3,000′ gain up to camp, which we didn’t anticipate would take us more than a few hours. It was around 2 PM by the time we left the car…and we were right. We cruised up the Railroad Grade trail, the sun overheard and barely a cloud in the sky. We reached the upper Sandy Camp by 4 PM, in just around 2 hours. Well…only 4.5 hours until sunrise!?!? We laughed. We had left our playing cards in the car…it was going to be a slow afternoon. We pitched the tent, filled up on water, and then lounged around while listening to some podcast episodes Tyler had saved on his phone. Ahh…it was good to just be back in the alpine, with glaciers above me and lovely meadows below. We were the only ones at Sandy Camp on this warm Monday night…the mountain to ourselves. In a non-COVID year, this would be a totally different scene, EVEN on a Monday. But many guiding services have limited operations, and thus the mountain is just a little less trafficked.

We talked through our morning summit plan…from camp at 5,800, it was about 5,000′ of climbing up to the summit. We estimated this would take us between 4-5 hours, and we wanted to be coming down from the summit no later than 11 AM because of the warm weather. Plus, we wanted some food in town. We planned for an alpine start, planning to leave camp around 2:30-3 AM.

I MISSED ALPINE STARTS! It felt so refreshing to wake up in the pitch black, throw on my harness, strap on my crampons, and get moving again. Ahhh…I missed this. Tyler and I moved smoothly through the Easton Glacier…the low-angle terrain firm and grippy with our crampons. There was a surprising lack of boottrack for such a “trade” route on the mountain, but then again, COVID. I knew the route well, though, and we plugged away, gaining elevation slowly because of how low-angle the route climbs up towards Grant Peak.

We passed a group at the Sherman Crater, just before traversing onto the Roman Wall, where we switched back and forth towards the summit plateau. It felt like home on the upper mountain, this being my 5th time…good to be back.

At 7 AM, SUMMIT! We timed it perfectly, reaching the summit in the early morning hours. Tyler had done it…completing his last Washington volcano (I still have Glacier Peak left, as of writing this post). We snapped some photos on top, ate some snacks, and headed back down.

This trip report is much more brief than I normally write, but I don’t feel obligated to write much more detail about the route or the conditions. The Easton is straightforward and an excellent introductory alpine climb. The weekend weather was splitter, the conditions smooth, and overall, there weren’t any hiccups to report. It felt great to be back in familiar territory and get back into the swing of things after my injury.