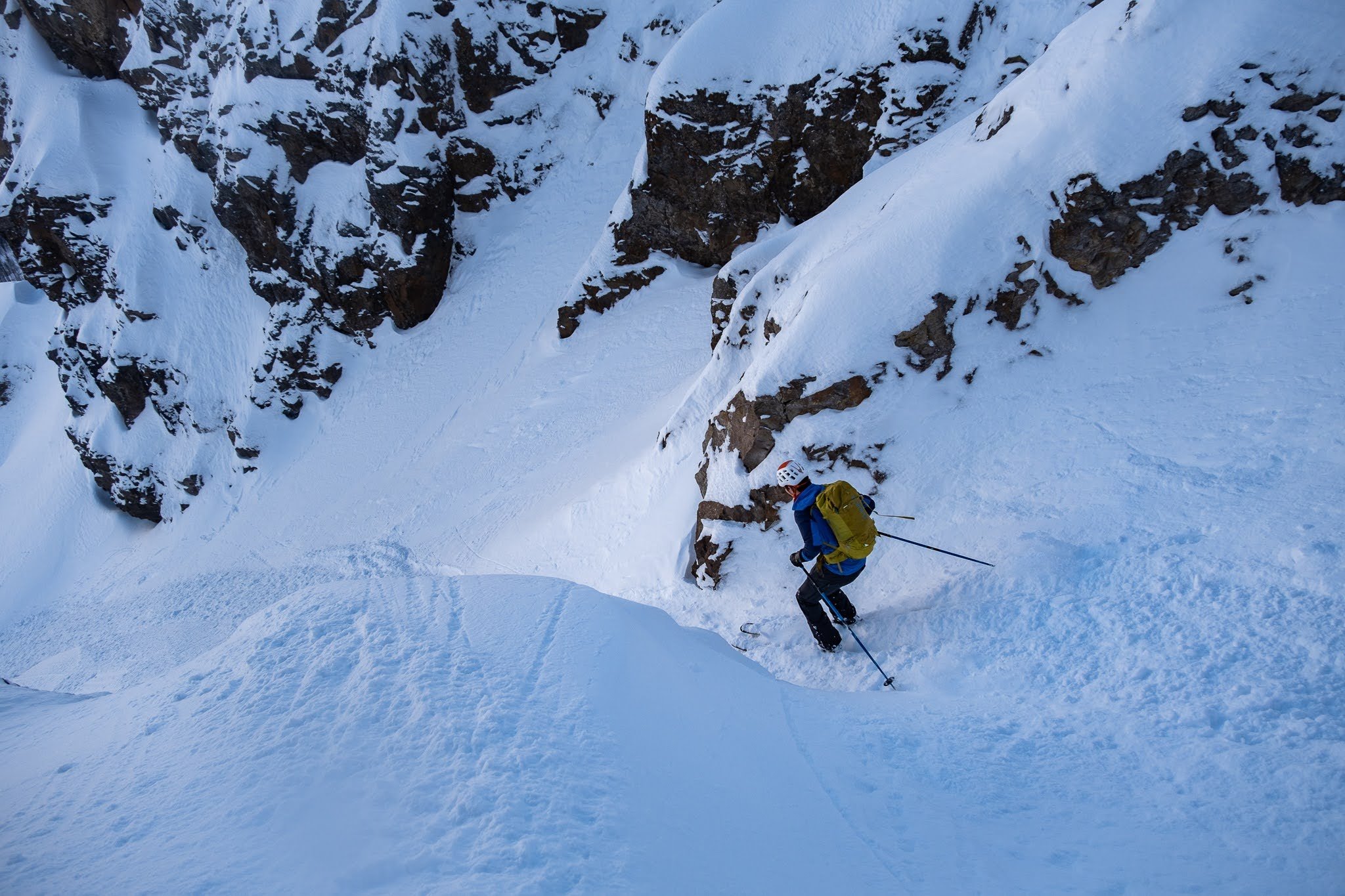 November has been a miraculous month thus far for skiing; typically, November is dark, dry, and sad, and skiers get overly excited and head out into “sharky” (i.e. rock-infested) terrain.

NOT THIS YEAR! Last week Dan, Michael, Tessa, and I had explored Bullion Basin and the powder had delivered…with NO SHARK ATTACKS! The snow was so good I had to go back, and with high pressure in the forecast for Saturday and Sunday it would be…sunny? WHAT A CONCEPT!

Dan, Madelynn, Kyle, and I had drawn out some routes on Caltopo in the Cement Basin and Lake Basin regions near East Peak, and we were excited to go out and explore further than Bullion Basin.

We met up in the Upper C parking lot at 7:30 AM and were able to slap on skins at the cars. We took the snowshoe trails into Bullion Basin, following Ted’s Trail switching back and forth at a low grade. Once we reached Bullion Basin we followed a skin track heading up towards Platinum Peak, climbing up the SW face of Platinum to then ski down into Cement Basin. The skin track was icy from a rain crust that had formed from days prior; needless to say, there was slipping and sliding at points.

Half-way up the skin track I turned around and…MT RAINIER! In full view…amazing.

Blue skies in November sure was a treat. We continued up towards Platinum Peak, where we transitioned for the first time and prepared to ski down into Cement Basin.

The top of Platinum Peak was our first transition point for the day, and we planned to ski down into Cement Basin to then skin up towards the Lake Basin chutes. We were giddy and excited for the north-facing aspect off of Platinum Peak, as the snow appeared dry and stable. The turns were going to be good!

And good they were! Kyle ripped down the slope, shredding on lightweight skis made by Peter Butler, a local skimaker. Towards the bottom we slapped on our skins and headed up towards the Lake Basin chutes, a series of narrow couloirs that face north towards Basin Lake. We had scouted them out on Caltopo, and Dan had even read about them in a local guide book. They sounded narrow, steep, and a whole lot of fun.

We followed the drainage north up from Cement Basin to a low saddle, then followed Kyle as he cut skin track up the ridge to the NE towards the ridgeline above Basin Lake.

From the top of the ridgeline above the chutes we began to look down. It had been a few months since I stared down a couloir…but the memory came back. Looking at the choke, analyzing the moves…it all fell into sequence again.

We took a look at three different couloirs…looking down it was hard to assess which ones were fully “in” in terms of snow coverage. Rocks were clearly protruding in places, but we could see ways to ski around them. Eventually we picked our line, and as expected, Kyle led the way down, sluffing off the top layer as we kept eyes on his tracks. There was around 4-6″ of top layer snow on a firm rain crust, which sluffed off pretty easily, but overall the stability was solid. The layers appeared well-bonded and “right-side up”, meaning the crust was below the top layer of lighter snow.

There was a flat bench with a large tree around halfway down the couloir where we agreed to meet back up as our first “safety spot.” After Kyle’s initial turns I followed suit and headed down towards him. Sluff management was key, i.e. giving time for the snow kicked off to slide past before turning back into the slope.

The choke (i.e. the narrowest part of the couloir) was next, and again Kyle led the way, straight lining through it before making a turn. The choke was just wide enough to fit through sideways, which was my method of getting through (Kyle charges harder than I do).

We continued on down through the couloir, which opened up into a wider apron further down towards the lake. The snow quality was quite variable, turning from light power to thick, heavy snow, to avalanche debris that was very garbage-y.

Once we were all down, we headed back up to the saddle above Cement Basin, where we had skinned up to previously. This time, however, we opted to skin up west towards an unnamed point above Upper Lake Basin, where a north-facing bowl held great cold snow. As Kyle put it, “we skied a great line..now time to ski great snow.”

We took a few laps on the upper basin, circling back to the unnamed point and dropping back down into the northern facing bowl.

We took two laps in the upper bowl before south towards East Peak, where we took another lap in good northern facing powder.

Around 2:30 PM we began to head back towards the cars; from East Peak, we skied SW again towards Bullion Pasin, aiming for Ted’s Trail where we had skinned up. The southern slopes were much more sun affected than the northern slopes; by the end of the day the snow was wet, heavy, and chunky.

Eventually we met back up with the skin track and skated our way back down to the car along the snowshoe trails leading up to Bullion Basin. Overall, a great day in November with amazing snow!