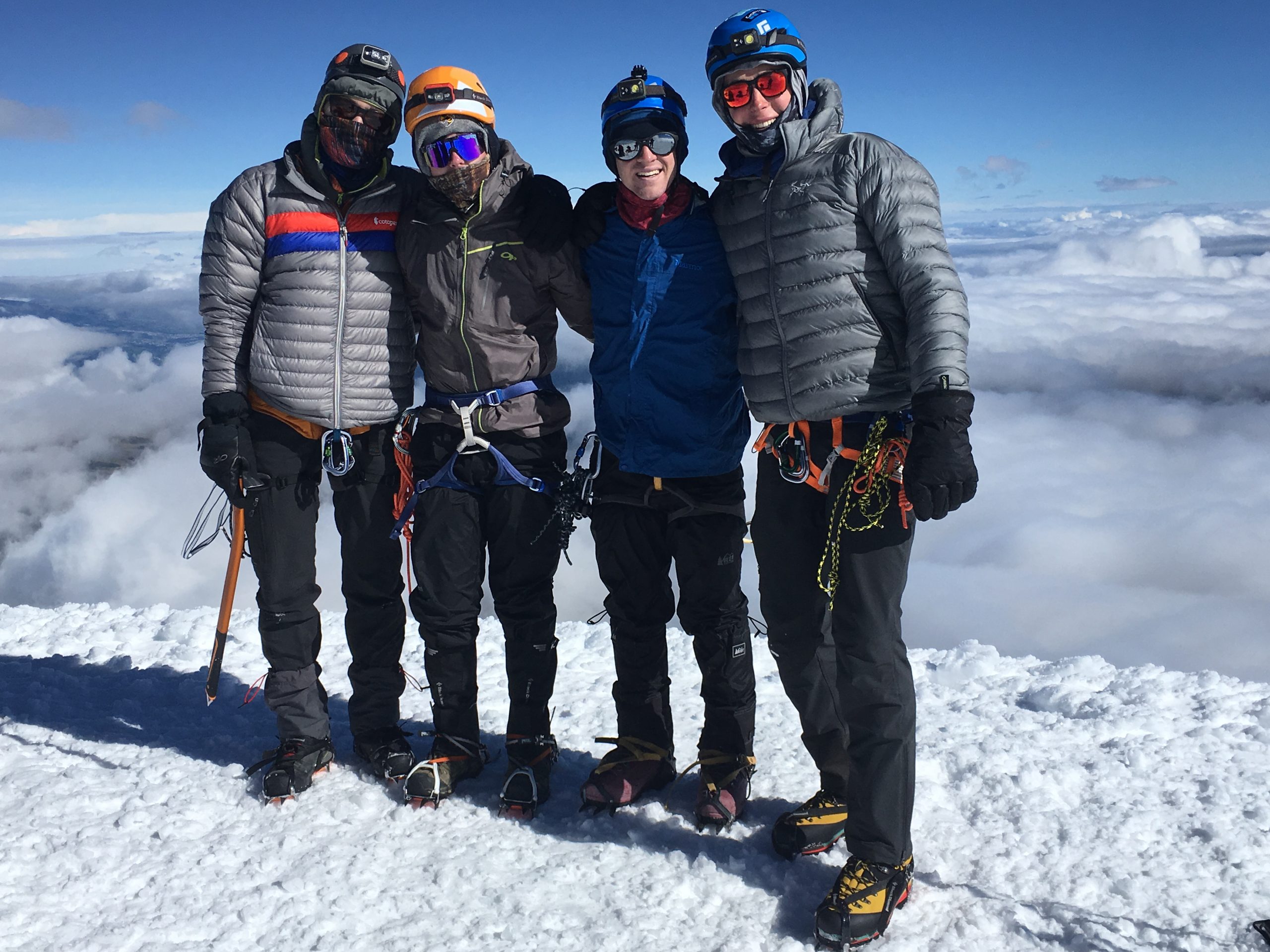 My first time in South America! With my Christmas Break from classes I headed down to Ecuador with some of my closest friends for some mountaineering and adventuring. We had come together in August when classes were back in session, brainstorming ideas for our next grand trip. I’d had my sights set on Aconcagua, but decided to delay that adventure until the next winter.

A great group of amigos.

One in the group had studied abroad in Ecuador and knew a friend who knew a friend who was a mountain guide, a perfect connection given that some of Ecuador’s tallest mountains require a certified guide per government regulations. PERFECT! We then began setting our sights on peaks to bag: Chimborazo, Cayambe, Cotopaxi. The three tallest volcanoes in Ecuador, three giants with beautiful glaciers, three reasons to begin our training.

To the gym! Over the school semester we hit the gym hard, improving our strength and endurance for our high altitude journey. We met as a group every month or so to practice crevasse rescue skills in our living room, parse through gear lists and itineraries, and read up on some of the navigational and objective hazards of the climbs. We were ready. . .

Final exams and then we were off! We packed into one of our roommate’s cars and headed to the airport, filled to the nose with excitement and hype. We touched down on South America just past midnight, drowsy and tired from travel, but as we passed through the line at customs, with the border officer stamping our passports, we were wide awake again for the adventure ahead.

Living Room? Do you mean BASECAMP!

We set up our base of operations in Quito for the first few nights, in the Hostal Juana de Arco in the historic region of Quito. The next morning two of our group headed back to the airport to fetch the rental car, while I stayed behind with one who still had a final exam to fax back into his professor! We spent the first day touring Quito, walking around the cobblestoned streets and doing our best impression of tourists.

Later that day we met up with our mountain friends, who bused in from Sangoloqui, a nearby town, to say hello and prepare for the days ahead. We would meet up with them the next day for an acclimatization hike to Rucu Pichincha, a nearby volcano hanging high over Quito.

We loaded up into our tiny rental car, twisted the key in the ignition, and. . . NOTHING! Click, Click, Click. Damn, must be the starter?? We walked over to the parking lot attendant and tried our best, in Spanish, to explain that our car was dead. We waved down car after car entering the parking lot, asking for jumper cables, which seemed to be a rarity. FINALLY, we got lucky. And we were off.

Crammed into this tiny car, we drove up to the cable car leading up the mountain. Clouds hung high above the valley of Quito, draping the Avenue of Volcanoes in blanket of white. Cayambe and Antisana just poked through the clouds, though, giving us a glimpse of the rugged giants.

We started slowly up the trail, getting our legs under us and testing our finely tuned bodies at elevation, and taking plenty of photos along the way. Soon we got to where the trail diverged into two paths: one straight up the side of the mountain, and one along the shoulder to a saddle. Which one do you think we took?

Scrambling up to the top through the clouds, we reached Rucu Pichincha, our first volcano of the trip! We trotted back down the mountain to Quito, where we explored the local neighborhood, hungry for a helping of Ecuadorian food!

Overlooking the valley of Quito, shrouded in clouds.

Rise and shine! Early the next morning we ventured off to Corazon, a volcano further south near the town of El Chaupi, as we continued to acclimate ourselves to the altitude. A cloudy, overcast day, we were caught in and out of mist on our way to the top, sloshing around in mud at times. Cold at the top, we snapped a few photos and again headed back down the mountain, shuttling ourselves back to Quito each night for rest at our hostel.

And then back to the mountains it was the next day, this time to Illiniza Norte, and what a beauty of a day it was! Clear blue skies, sweeping vistas overlooking the surrounding valley, and our first glimpse of Cotopaxi, the conical beast just miles away in the distance, our next objective!

Looking up towards Illiniza Sur.

Our first big test: Cotopaxi! We drove up to a parking lot within the national park, where we left our small, somewhat helpless rental car for a 4WD truck. The road was unbelievably bumpy, as I was thrown up and down in the truck bed, my lumbar spine crying with every jolt and jump. After what felt an eternity, we made it up to the Jose Rivas Refuge, our camp for the night.

I could hardly sleep, the excitement of the day ahead in my head fueling every twist and turn in my sleeping bag. We headed out at midnight, ready to climb through to daylight. We chose the “Heartbreaker” Route, a longer but less crevassed route up the mountain, and one that no other group decided to take that morning. We had the mountain all to ourselves!

I was furious at myself when I realized I had left my prized DSLR camera down at the car. Oh well, my GoPro and iPhone camera would have to suffice. The route was a long, steep climb up to the peak, up the conical side slope of Cotopaxi. As the sun peaked through in the morning, we got some incredible views out across the valley below.

Just before the sun rose, at one of our breaks, we heard a rattling on the glacier below us. “ICE!” someone yelled. No, not ice. . . just the flexbar of one of my friend’s crampon. As usual, every adventure with a dose of misadventure. He quickly improvised, using a nylon runner to keep the crampon together. Not exactly perfect, but functional.

Soon enough, SUMMIT! All of us stood on top, proud to have accomplished this, together. We snapped photos, looked out over Ecuador, and then headed down.

A storm quickly caught our tails, hurrying us back down the mountain. We packed our things, rode that same back-breaking car down, and headed along to Riobamba, prepping for our next objective: Chimborazo.

The next day the others in the group woke tired and pretty beat. They opted to forego Chimborazo and spend the day in Banos, an “adventure capital” of Ecuador. I still wanted to give the mountain a shot, so I headed up with my Ecuadorian friends, planning to reunite with the rest the next day in Banos.

As soon as we made it to Chimborazo, we knew a summit bid was not going to happen, the snow pouring down in buckets, avalanches booming in the distance. We headed down the way we had come up and went over to Tungurahua for a night-hike. We made it up to a refuge part of the way up the mountain, where we rested, ate some food, and then headed back down.

I met back up with my friends the next day in Banos, and we headed out to Tena for a few days in the Amazon whitewater rafting. Different from my normal dose of mountains, but definitely a fun excursion.

My friends were heading back to the States to make it home in time for Christmas, but I chose to give Chimborazo another shot. They dropped me off at the bus station in Riobamba and I headed back up. The clouds had parted for a bit, so we made it up to a high camp, with hopes high for the morning.

Peaking through the clouds.

In the morning, however, I woke to a sky full of snow, a fresh blanket covering the ridgeline up to Pico Veintimilla. With conditions worsening, we descended the mountain, with another reason to come back!