On any journey, and especially the long ones, you come away with memories and photos. But it’s not always the case that you come away with something learned. That takes some conscious thought and reflection. Well. . . after some time, I’ve learned a few things from this journey.

Are you solo or alone?

When I set out on this trip, I wasn’t sure what to expect. I had never gone on a hike without a partner; all of my trips previously had been with groups or with friends/family. So when asked who I was going with, I responded “I’m going solo.”

At the time, I didn’t fully understand what that response meant, and in reality, how wrong I was.

I hadn’t intended for this trip to be a solo, initially at least. I had just failed to find a willing and able partner to join me for the entire thing. As I got closer and closer to my planned “start date,” realizing that I was either going to have to attempt to hike by myself or abort the trip, I starting thinking more about the idea of a “solo,” as they were typically called.

Yep, that’s what it looks like most of the time.

“I can do this,” I thought to myself. “It will be good for me, a way to push my boundaries and try something in my challenge zone.”

Initially, my parents weren’t thrilled with the idea, citing that I was going to be without anyone to help me in an emergency, etc. Very real concerns. After talking it through with them, and agreeing to take a satellite phone to make daily calls back home, I was off on an adventure with me, myself, and I.

What I learned, after hitting some emotional low points in my journey, is that I wasn’t “alone.” It felt that way at times, looking out across the Colorado skyline and hearing the wind whoosh past my ears. But when I needed some comforting or words of inspiration, I could send a text to a friend and get a response within an hour or so. Not so alone. Just a little more removed.

Once I accepted that I could tap into the people I loved the most, even when I was on trail, the journey became “fun” again. I was excited to send out my next text message update, recording my successful summit of X peak or having reached Y destination. I connected myself back to my social sphere when I needed it, and when I wanted some peace and quiet, well. . . that was easy to get.

The importance of defining your trip objective

I knew this before my trip, and had even emphasized it to friends. I can’t take credit for this realization completely; I had been “coached” by Andrew Skurka, a friend and mentor, whom I had read and had chatted with throughout the past few years.

Before every single one of my trips, I try to create a clear, concrete “vision” for how I want to look back on my trip, even before I have gone on it. Do I want to joke about how miserable that climb was? Laugh at how exhausted I was that one day? Chuckle at remembering how much my feet hurt that one day?

Looking back now, I had failed to perform this exercise before this journey, jumping into logistics, data analysis, and full on expedition planning before thinking about what exactly I was trying to ACCOMPLISH. Sure, I wanted to climb a certain set of peaks, test out my abilities at solo hiking, and see an incredible part of the country, and take some photos along the way. But what was my end goal? At the time I did not have a good answer, and looking back now, that’s probably why the first few days of this trip were so emotionally difficult for me.

In the mountains, flexibility is key. Just ask any seasoned mountaineer, backpacker, rock climber, etc., how many times they have had to adjust course on a trip.

Again, I knew this going in, and even preached it to others in my college outdoor recreation program. But there was some part of me that wanted to accomplish the exact route I had planned and touch every inch of it, whatever it took.

That was EXHAUSTING. Thinking about Day 38 on Day 2 drained me, and after a certain point, after a few hundred miles, I began to appreciate that even if I didn’t see every blade of grass in Colorado, even if I didn’t touch every pebble or streak of dirt on my planned itinerary, this trip would be amazing, if I chose to remember it that way. That made life much easier. 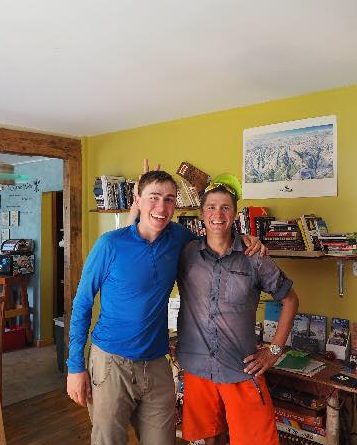 Gregory, a Triple Crown thru-hiker on the CDT I met along my route, but more importantly, a great friend I never would have met without an open mind.

To be clear, I wasn’t “giving up.” I didn’t. In the end, I did complete the route I set out to accomplish. I was just re-framing my success mindset. And it helped. . .a lot.

Treat yo’ self, you’ve earned it

This one is easier, but so much fun to realize! A hot shower isn’t “cheating.” Nor is a nice meal in town. You don’t have to force feed yourself that bowl of oatmeal you had packed and planned to have on trail when trail magic is thrown your way. You’ve earned it.

It’s not always about the journey, but more about who you do the journey with

This one was hard to realize. I had been dead-set on finishing this “dream” of a trip I had constructed. And I did. But that’s not what I remembered the most, even a year later.

What I remembered the most was those last days of my trip that I spent with my Dad through Rocky Mountain National Park. The goofy moments that I laughed about (and still do) with Gregory, a friend I met on trail. The funny looks I got in the airports after my trip, flying home looking like a beat-down, semi-homeless man.

A real goofball, but pretty fun. (My Dad)

This is my opinion, so take it with a grain of salt: accomplishment feels different if you don’t have anyone to share it with. Even with a satellite phone, calling my parents from a summit, it wasn’t the same. It was still enjoyable, don’t get me wrong, but different. And going forward, I just needed to (and still do) remember that.