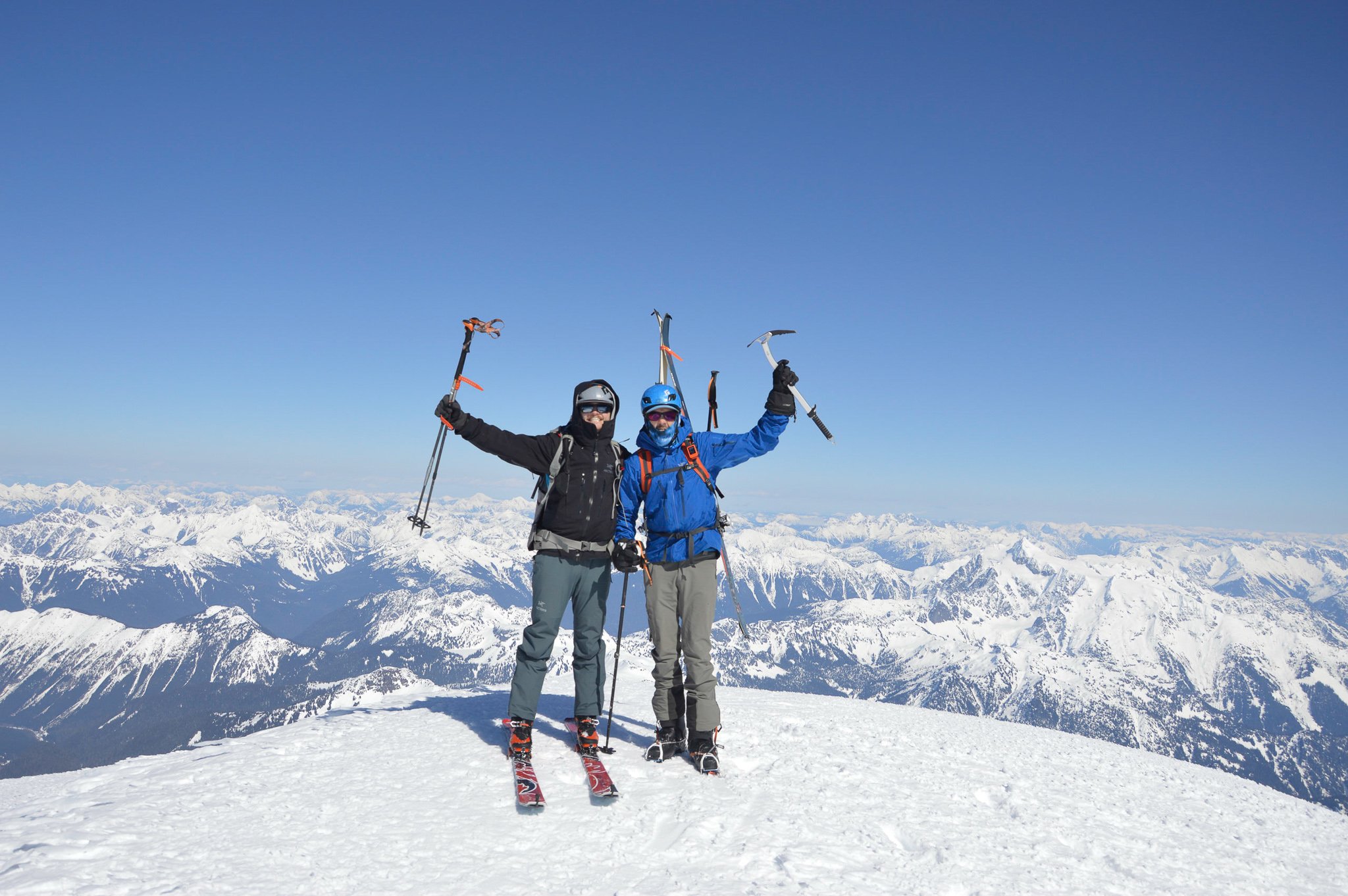 The Coleman-Deming route on Mt. Baker is an excellent spring ski mountaineering objective that allows you to skin from car to summit and ski continuously back down. Only ONE transition! Amazing…

In March of 2020, just before the COVID-19 pandemic, Chris, Dan, and I headed up to Heliotrope for a ski of the “C-D”, what the route is colloquially called. We parked overnight at a pull-out along the road and started out the next morning before sunrise.

We opted for the Grouse Creek approach, which I highly recommend in the early season. It saves many of the shenanigans of the Heliotrope Ridge trail, which can often melt out fast and/or become pretty icy.

In Spring conditions the morning snow can be firm and icy, so I’d advise bringing ski crampons in case. We put them on for just one brief section climbing out of Grouse Creek.

From Grouse Creek, the next landmark is gaining Heliotrope Ridge, which is towards climber’s left of you as you climb out of the drainage. From the ridge, the route towards the Roman Saddle is incredibly simple: climb high on the Coleman Glacier, staying to climber’s left of the Black Buttes, yet not dropping too low on the Coleman Glacier. I promise, the terrain makes it obvious.

I would advise giving space between you and the Black Buttes. Later in the season there can be hazardous rock and icefall from Colfax. Later in the season, large crevasses open up in this area as well. In March, however, everything was sealed up, and we did not encounter a single open crevasse.

From the Roman Saddle, you will likely want to strap on crampons and put skis on your back to climb the Roman Wall. Hold to climber’s right of the ridgeline until you gain the summit plateau. Again, it’s pretty dang straightforward.

Next step: CELEBRATE ON TOP! Woohoo! Also, admire the North Cascades…wow are they magnificent.

A word of caution: Skiing off the summit plateau can be quite disorienting, because it is so flat. Leave yourself a “breadcrumb trail”, whether that is a GPX track, wands, whatever…your goal is to ski down the way you came up, but it is VERY easy to end up in some very hazardous terrain, like the Coleman Headwall.

With any volcano spring ski descent, timing is everything. Don’t start your ski down too early…you need the sun to cook up some corn snow for you. Otherwise it will be one icy, choppy, and possibly dangerous ride down. That said, don’t wait too late either, or wet slides could make for a bad day. We topped out around noon, and started our ski down around 1.

As with any volcano, you will likely get a “volcano buffet”: corn up high, potatoes down low. Enjoy.