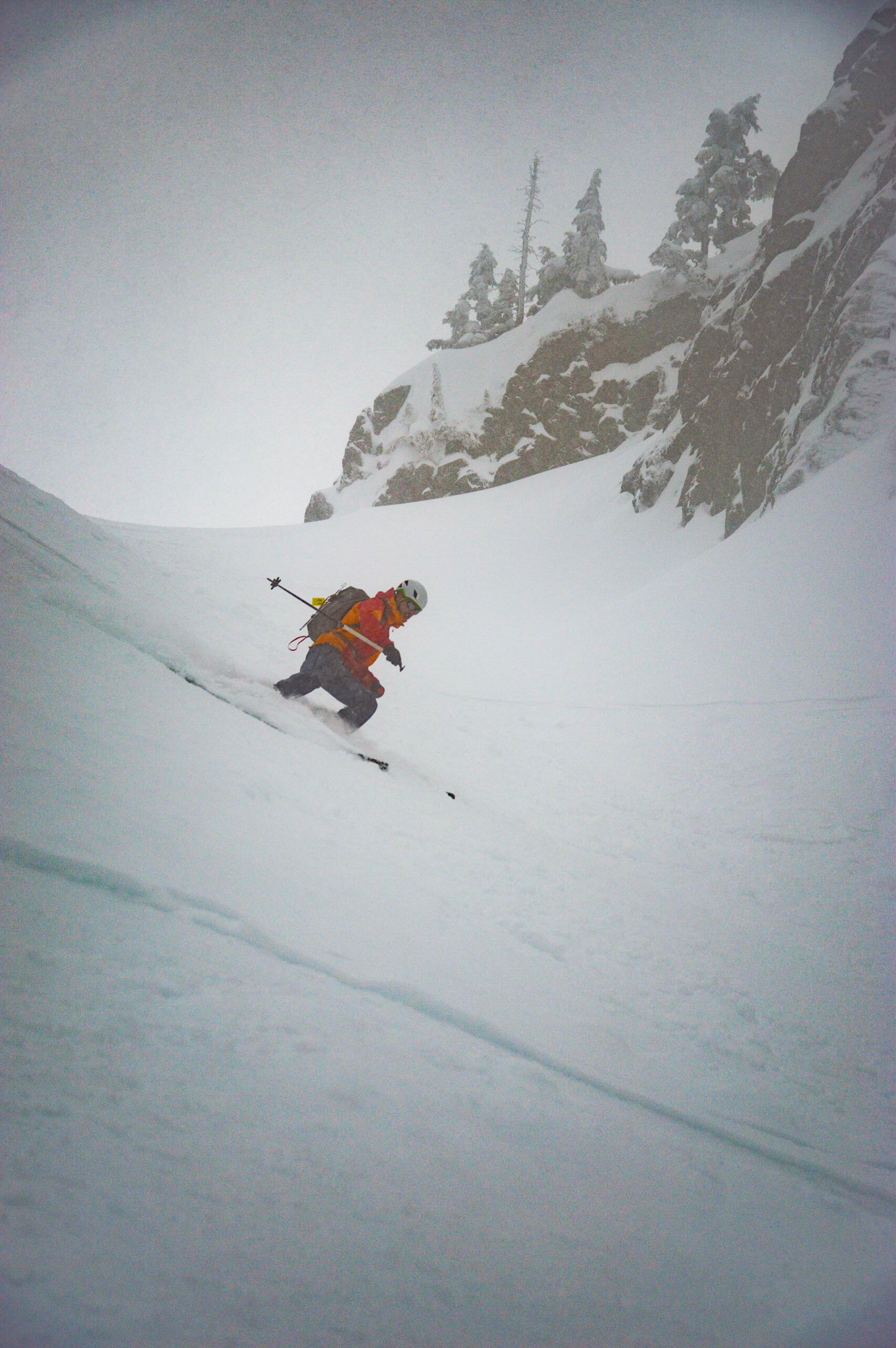 The Team: Daniel Bolliger, myself

In the span of one month, I had attempted this trip twice before:

In a real small-world moment, Daniel had commented on a trip report I had posted in the Turns All Year (TAY) Facebook group, noting that he worked at the same company I did! We met up on Thursday afternoon after work and started to hash out a plan for Friday.

Throughout the week, as usual, high pressure made week days beautifully clear and sunny, but low pressure was expected to return Thursday night into Friday morning, bringing moisture to the Cascades. Earlier in the week, forecasts were uncertain as to how much snow this would translate to. As the week ticked on, it appeared that the front was moving further south.

Daniel and I put together a list of options; he had made plans with a friend for Saturday & Sunday, and I was eyeing an alpine objective for Sunday, so we opted for a local option for Friday: Chair Peak Circumnavigation.

We read up on the avalanche bulletin:

Overall, though, the general avalanche hazard was low, especially on the low-angle terrain of the circumnavigation. There were two areas to keep our eyes peeled for:

These were the three “higher angle” slopes we would be moving across during the circumnavigation. We planned our route to circumnavigate counter-clockwise:

Daniel met me at my house around 6 AM; we loaded up my Honda Element and began our drive up to the pass. Rain transitioned to light snow as we crested the pass, dusting the road surface in the early morning light. We arrived at the Source Lake trailhead around 7:15 AM.

Geared up, beacons checked, and Garmin inReach tracking, we headed off at 7:40 AM. Clouds were thick above, and visibility looked terrible, as it would remain the entire day. Snow continued to fall lightly, and as we made our way up to Source Lake, we could notice 2-3 inches of fresh snow atop a crusty layer that was icy in spots.

We took around 35 minutes to reach Source Lake basin, arriving by 8:15 AM. There was an easy skin track to follow all the way up, no real beta necessary here!

Once at the Snow Lake Divide, we removed our skis and began booting. The top layer of snow was sluffing easily off the crust beneath, and we felt that bootpacking the firm snow would be faster than skidding on a skin track back and forth. The booting was easy and fast, and we were able to take a very direct line up to the Thumb Tack. There was a large pile of avalanche debris just below the Thumb Tack; we kicked steps through it and up to the col entrance to the North Face of Chair.

For a brief moment, I paused and turned my head to my left, gazing up at what I could see of the NE Buttress of Chair Peak. There seemed to be an ice step on the first pitch that looked of beautiful blue ice.

Peeking down the North Face, we could not see ANYTHING! We could barely see 30 feet ahead of us. Slowly, we took the slope one turn at a time, and ugly turns at that. Turns out, it’s hard to ski when you can’t tell how the terrain is below you. Every 30 meters or so we would stop and look at Caltopo, making sure to stick close to our route. We knew that the North Face funnels down towards Snow Lakes, but we were aware that if we got off track there were a few cliff bands that could have tied us up. By taking the descent slowly, we were able to stick to our track, but the skiing SUCKED!

As soon as we exited the North Face, we traversed left towards the shoreline of Snow Lake below the climb to Chair Peak Lake and Mt. Roosevelt.

We reached this area by 10:40 AM and transitioned for our skin up to the Holy Diver Couloir. Here we had a check-in conversation on the day:

Daniel and I alternated cutting track up to the Holy Diver Couloir. Again, the top 3 inches of snow was not bonding to the crust layer beneath, so in steep spots the skinning was tricky. We contoured onto a bench above Chair Peak lake and beneath Mt. Roosevelt, before traversing to the north to climb up towards the Holy Diver entrance.

For the final 200′ up to the Holy Diver Couloir, again we took off our skis and booted. The pitch was too steep in the conditions to easily skin; booting was much easier.

We topped the Holy Diver Couloir at 12 PM; the visibility was slightly better than on top of the North Face of Chair. At least we could see 50 meters now! The couloir was wide open, and Daniel and I felt comfortable skiing it.

I dropped first, and the snow was sweet! This time I could actually see where I was going! The Holy Diver is wide and a “fun” angle, 45 degrees for the entrance and then quickly mellowing out to low-angle cruising.

I snapped a single pic of Daniel skiing down the top of Holy Diver, before putting my camera away because of how terrible the picture-taking conditions were. Flat, low light with no contrast.

We cruised through the Holy Diver, making soft turns through 3-4 inches of powder on low-angle terrain. Daniel noted that it was advantageous to traverse hard to the NE at the end of the Holy Diver Couloir rather than following it down to the drainage below, as we would be losing unnecessary elevation. We turned and hugged the contour to our right once we were below a noticeable cliff band, contouring back towards the Snow Lake basin.

There was a faint skin track that we could follow along this traverse back to Snow Lake. By 1:15 PM, we were at a saddle above Gem Lake. We transitioned and clicked in to traverse back towards our skin track below Mt. Roosevelt, aiming for the bench above Chair Peak Lake.

On this traverse, we tried to keep our elevation as high as possible; we cut across a few avalanche gullies and drainages, and skirted through trees. We dumped back out to our skin track in the apron below the bench above Chair Peak Lake.

Once we met back up with our skin track, we slapped on our skins again and continued on up towards the bench above Chair Peak Lake. Once at the bench, we again checked in, both with each other and with our maps:

We chose not to transition at the bench above Chair Peak Lake for the 200′ ski down to the lake; it was short enough that our awful skin-skiing form was manageable. Once at the bottom, Daniel began to cut a track zig-zagging up towards Melakwa Pass. We topped out the pass at 2:25 PM.

Looking over towards Melakwa Lake, the visibility improved, slightly. We felt good to continue. We transitioned and agreed to try and traverse as high as possible over towards Melakwa Lake, keeping our elevation rather than dropping straight down. In the end, this strategy didn’t really save us anything, as we had to drop beneath a cliff band near Melakwa Lake anyway. The SW facing slopes beneath Melakwa Pass were horribly icy and wind scoured, so I was glad I was traversing rather than skiing down.

At Melakwa Lake, we transitioned to skins, only minutes later to decide that we just wanted to bootpack instead. Again, the SW slope was horribly scoured and icy, and firm enough that booting was so much faster. We climbed to climber’s right on the Bryant Couloir; no ice axe or crampons were necessary. Low angle and good snow made for easy bootpacking.

We topped out on the Bryant Couloir at 3:55 PM; I could see around 40 meters down the couloir. It looked wide and full of fresh snow. We noted that as the couloir narrowed further down, there was a divergence: a lower-angle option to skier’s left and a steeper option to skier’s right. We needed to identify this divergence to avoid a cliff band in the middle.

Again, with low visibility we took the descent slowly, but the skiing was GOOD! The top layer of 2-3 inches sluffed off easily over the hard crust, and with each turn I moved into my sluff from above. Still, the general conditions were stable: no major slabs, just a small top layer shearing off.

Once we sighted the split, we chose skier’s right and skied down towards Source Lake. Overall, the Bryant was wide and easy to ski down, even in low-visibility. No jump turns necessary, just tighter turns.

Third times a charm! Daniel and I were happy with our tour, even though we barely saw anything!