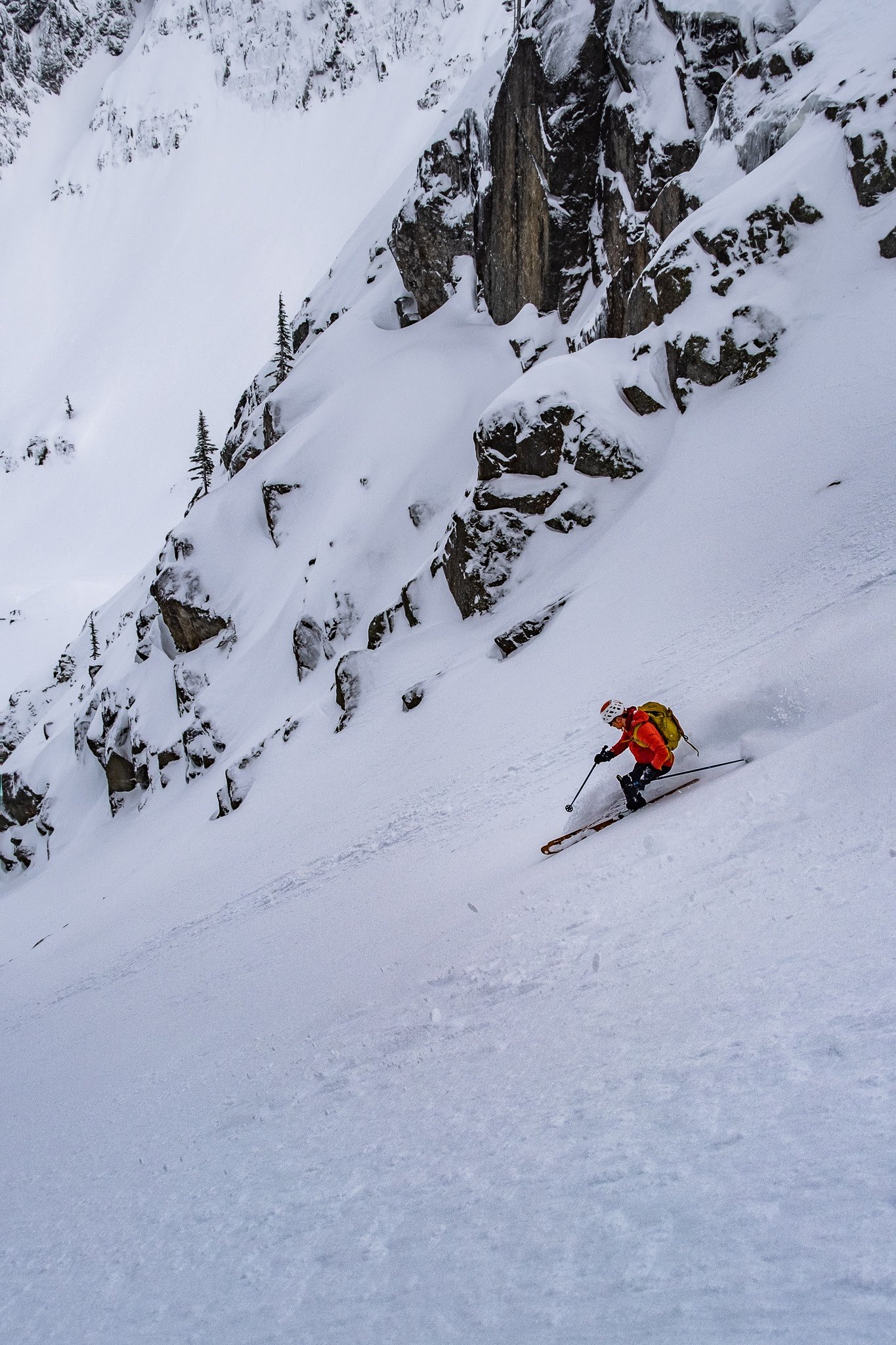 Saturday brought 6-7″ of fresh snow to the Snoqualmie Pass region and Sunday was forecast with clearing skies and spots of sun throughout the afternoon. Kyle, Will, and I planned to head out and do the Chair Peak circumnavigation, a Snoqualmie classic, as Will had not explored the region much. We headed up to the pass and started out at 7:30 AM, hoping that the early morning fog (typical with easterly flow through the pass) would clear as we continued throughout the day.

We made quick work of the Alpental Valley approach to Source Lake, passing a few skiers at Source Lake as we continued up to the Snow Lake divide. I had set the skin track up Source Lake the day before, and it *mostly looked like it had held up through all the skiers on Saturday.

We topped out at Snow Lake divide and opted to ski down to Snow Lake directly, rather than ski the north slopes of Chair Peak because:

(A) the visibility was terrible. I had skied the north slopes of Chair Peak on my previous Chair circumnav…it was not fun, to say the least.

(B) We felt there would be better skiing around Chair Peak Lake or Melakwa Lake, so we would save our time and effort for that.

We met a solo skier who intended to ski the north slopes of Chair by himself…later in the day we met up with him again, and he told us he bailed on that because of the visibility.

Despite skiing down in a ping pong ball, the short ski down to Snow Lake was quite fun, with deep, fresh snow that felt stable underfoot. We transitioned down at the lake and began the slog across Snow Lake, with maybe half a dozen skiers already making their way across. Busy day in the backcountry!

We found a skin track that cut through the powder most of the way up to Chair Peak lake; the skier appeared to turn off right towards Gem Lake around 4,600′. Kyle, the typical workhorse of any group, cut nice skin track for Will and I. Thanks buddy. From the col above Chair Peak Lake, we re-grouped and discussed our plan for the day. Our initial plan was seeming to be out of the cards, given the visibility, so we opted to take it slower and ski some laps over Chair Peak Lake. I had my eye on a line titled “Cupcake”, just to the SW of Chair Peak Lake, and we agreed to go and check it out. From Melakwa Pass, we booted along the ridgeline, dodging trees, holes in the snow, and some occasional bushwhacking, but without too much effort we were on top of the Cupcake, looking at the sprinkles…hehe.

We saw some cornice buildup above the entrance, and cut off one or two cornices and dumped them into the couloir, testing out the stability. There was no propagation, sliding, nothing. The slope appeared to be quite protected and level-loaded. I performed a ski cut and made my way down towards a shoulder on the slope on skier’s right of the couloir. Again, nothing. I made some turns down to a safe spot and pulled out my camera to capture Kyle and Will.

The couloir had two “steps” to it, and I positioned myself in the middle so as to get them skiing the top and then looking down at them skiing below.

The snow was SO GOOD! At the bottom, we all were talking about our second helping of Cupcake…oh how we wanted that second cupcake. Instead, though, we turned our eyes to the E and looked up at Little Alien, another couloir shooting off from Melakwa Point. Quite narrow at the top but opening out to a nice apron, the couloir appeared similarly protected from the prevailing winds that had been out of the S the night previously. Hmmm…cupcake, or alien?

We chose to go extra-terrestrial, and skinned our way up the apron towards Little Alien. Once the pitch steepened, Kyle, yet again, played hero and wallowed his way ahead through the nearly hip-deep snow, setting a misery-filled booter for us. We stopped booting once we reached the constriction, mostly because Kyle wasn’t able to gain much purchase anymore through the deep snow. No matter! The skiing down below looked amazing.

From the start of the constriction, again I tested out the snow with a few initial turns, finding no propagation. I skied my way down to a safe spot and pulled out the camera for some obligatory photos.

We hooted and hollered on our way down the Little Alien* (kinda, below the constriction)…the snow was again SO GOOD! We made our way back up to Melakwa Pass and discussed the possibility of going for that second Cupcake…Will didn’t have a headlamp, though, and our timeline for making it up and down the Bryant Couloir was getting tight. We opted to take a bonus lap on the north bowl above Chair Peak Lake, a quick 20 minute detour, and then continued south towards the Bryant Couloir.

The sun put on an absolute light show as we skinned up the Bryant Couloir, lighting up the Snoqualmie Pass region for us to see. Such a gem!

From the top of the Bryant, we could see the Alpine Lakes crest, with Lemah, Snoqualmie Mountain, and many other peaks poking out of the easterly flow fog sitting low above the valleys.

Last up for the day…the Bryant Couloir! A classic line dropping NE from the col just north of Bryant Peak. It appeared it had been tracked out throughout the day, with some residual good snow in places, but mostly a chunder pile of now thick, sloppy snow. Still, there were a few good turns!

I went first and snapped some pics of Kyle and Will entering in.

Pretty quickly, though, the visibility turned to ping pong ball conditions, as we made our way down to Snow Lake. As Kyle explained, the easterly flow constantly creates a cloud layer that sits over Source Lake. We were entering the twilight zone, it seemed. The visibility was vertigo inducing…were we going downhill? We slowly made our way down the Bryant, using the ample amount of ski tracks as visual aids. Before long enough, we were back at Source Lake and ready for the cat-track descent out (which was not the most fun for Will, as a splitboarder, but he was a trooper!)

Craziness today as my @movementskis broke while SK

Check out my latest gear review with @outdoorproli

Got to ski three awesome lines today with @nick_mu

@kyle.mccrohan and Jon look on at Koma Kulshan. Th

There are few shots that I personally take pride i

Sometimes powder isn’t so easy to get to... @ste

Turkey trot...or rather turning the turkey? Who ca

Long weekend ahead and already dreaming of more tu

Winter!!! An amazing and surprising powder day in

Ski season is here!!! Great to start the season of

Spent an amazing Saturday with @alpine_explorer an

A fun romp up Mt. Forgotten with @tyljasz. I love

Took the skis for a walk today. Got a little too e